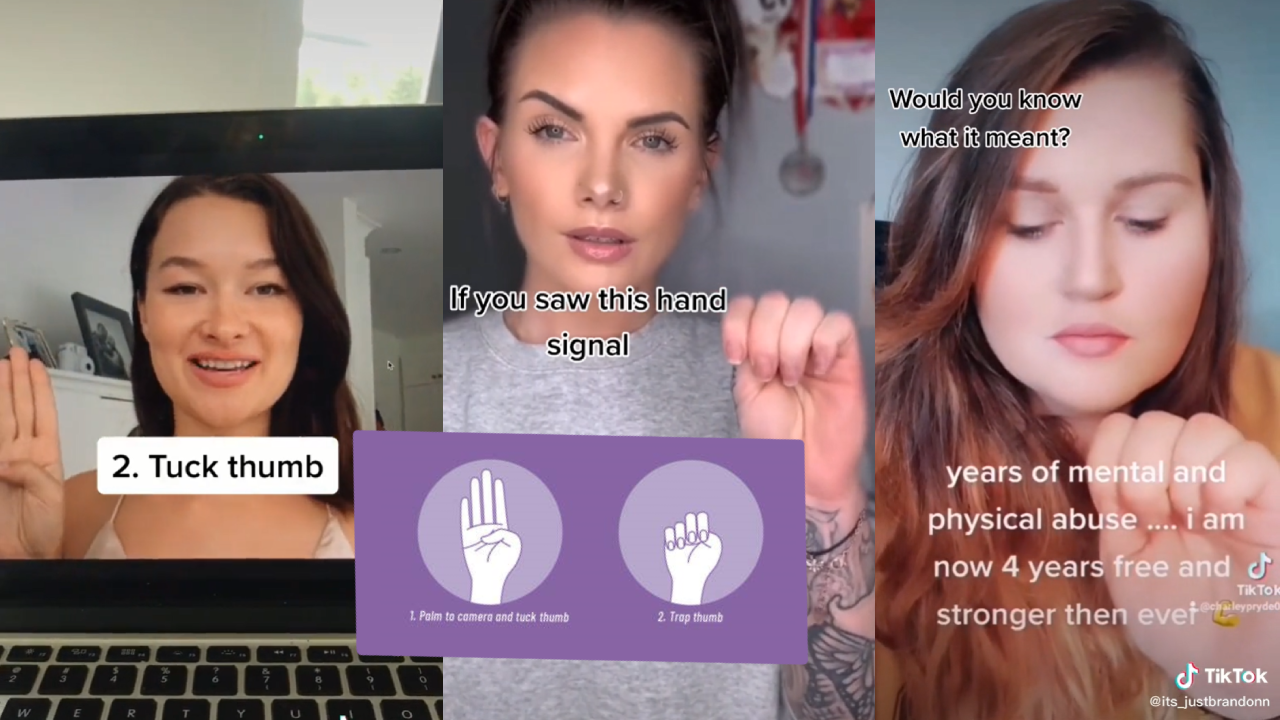 The viral TikTok hand gesture that saved girl from kidnapping

Beyond cute cat dances and videos, TikTok trends can be of vital value. This was the case with a young Kentucky girl in early November when she used a popularized hand gesture on the video-sharing app while in a kidnapper’s car. The gesture was created as a way for women victims of domestic violence to silently seek help via video.

On November 5, a driver spotted a teenage boy in a car driven by an older man on a Kentucky highway. The young girl waved, sliding her thumb into her palm and closing her fingers into a fist.

Recognizing the signal, the driver called the police, who arrested the older man and discovered that the young girl in the car had been reported missing in North Carolina two days earlier.

The hand gesture was created as part of the Canadian Women’s Foundation’s “Signal for Help” campaign at the start of the Covid-19 pandemic, to give people stranded at home with violent partners a way to asking for help “without being heard and without leaving a digital trace”. The silent manual signal was a perfect solution during a period of increased isolation at home – but also more video calls between friends, family and colleagues.

Then some TikTok creators caught wind of the hand gesture and started sharing it widely. A video, posted Oct. 30 by two feminist activists, showing people how to use the signal has garnered more than 600,000 views.

Others played the gesture used in various scenarios.

Other methods have been shared on social media to allow victims to seek help. A Polish teenager set up a fake cosmetics store, where people could send their address under the pretext that they wanted to buy a product – but they were really asking for the police to be sent to their home.

In South Africa, people could send a WhatsApp message to an organization against gender-based violence asking for “koesiesters”. But they didn’t really want to buy these traditional South African donuts – they were using the password to report the violence in the home.

An upsurge in domestic violence during Covid-19

Studies have shown that domestic violence increases whenever families are together for long periods of time, such as summer vacations and holidays. Global lockdowns coupled with tense situations – like job losses or disease – have made Covid-19 a perfect storm for an increase in gender-based violence.

Domestic violence complaints have risen by more than 20% in countries like Argentina, France and Singapore during each country‘s respective lockdown periods from March 2020, according to the UN. Other countries have experienced peaks of rape, disappearances of women or feminicides.

Other steps like the Canadian Women’s Foundation campaign have been taken to give women safe ways to report violence in the home. In Spain and France, victims could ask for help discreetly in pharmacies, asking for the “mask-19”.

While it is essential to raise awareness of the ways in which victims of violence can seek help, there are concerns that making these methods viral will only make it easier for perpetrators to recognize them. This is why some advocates say it is important to have several ways for people who have experienced domestic violence or other forms of violence to seek help – whether it is by waving hand while video chatting with a friend or contacting a trusted hotline using a password. .

Get to know the Spanish PDO Montsant through the project “Quality European wines: taste the difference”

“The Physician” Author Noah Gordon Dies at the Age of 95