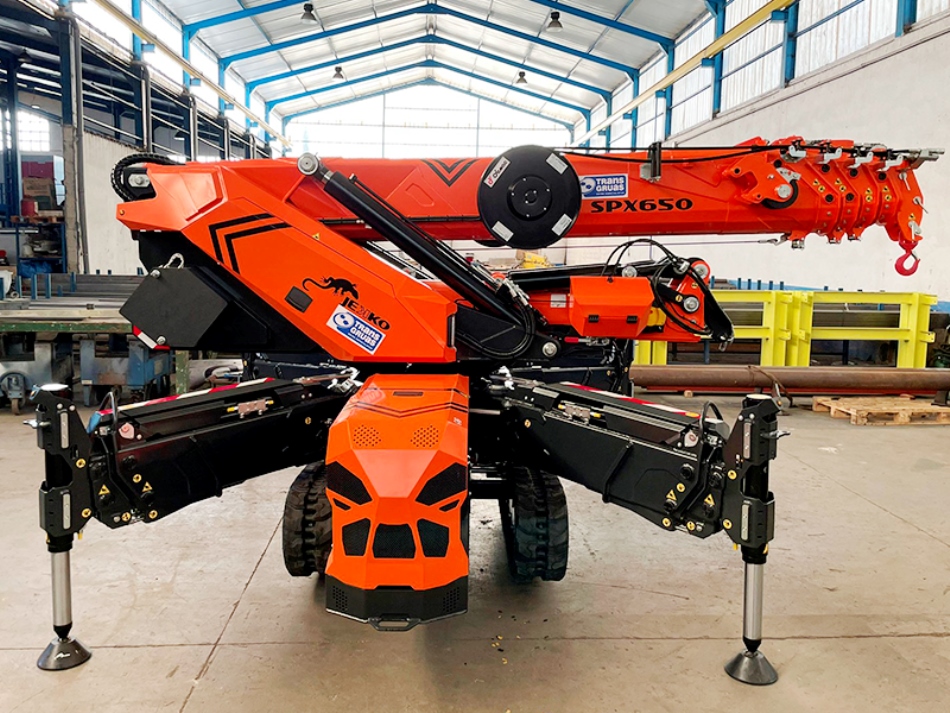 The new model, the SPX650CDH, follows the launch of the lithium-ion battery version of the crane in mid-2020 – See: Jekko unveils the SPX 650.
This first diesel model was purchased by Talleres Laguillo, a steelmaker, boiler manufacturer and industrial maintenance company based in Cantabria, northern Spain. The company was looking for a high-performance compact crane that could work reliably both indoors and outdoors, and the new model “fitted the bill perfectly”.

The SPX650CDH has a full power 15.4 meter five section main boom and is also equipped with a 5.9 meter four section hydraulic luffing boom for a maximum tip height of 23.5 meters at which it can support 800 kg. The maximum radius with the boom is 20 meters where it has a capacity of 150 kg. The crane can also grab and transport up to 800 kg over 360 degrees. The boom stows on board under the boom and as part of the superstructure, with the hook in place and already rigged. If needed, the boom slides and can be attached to the boom and the hydraulics connected for very easy assembly. Or it can be completely removed from the machine.

The tracks extend from a total width of 980 mm to 1.38 meters and, as with the stabilizers, can be adjusted asymmetrically.

The new machine was purchased from Transgrúas, Jekko’s distributor for Spain. Sales Manager Ian Trenzano said: “We are very pleased to have sold the SPX650CDH. It’s a very compact crane, with smooth but ready operation, and after the SPX532 we were pretty sure it would be a commercially successful product. It is a very efficient model. We have already sold four units and three more will follow soon.
We think we can sell many more, especially to rental companies, who have already shown interest.

Jekko Sales Manager Alberto Franceschini added: “Jekko is extremely pleased to have delivered the first diesel-powered SPX650 to Spain. Countries like Spain and Italy are going through the ecological transition in a similar way. We are sensitive to this subject but aware that diesel still plays a major role. We have combined the latter with an electric motor to make the SPX650CDH a real ecological but inexhaustible crane for Spanish and Italian construction sites. We like to define this model as the “recovery machine” that will surely have great success in the Spanish market and everywhere. »