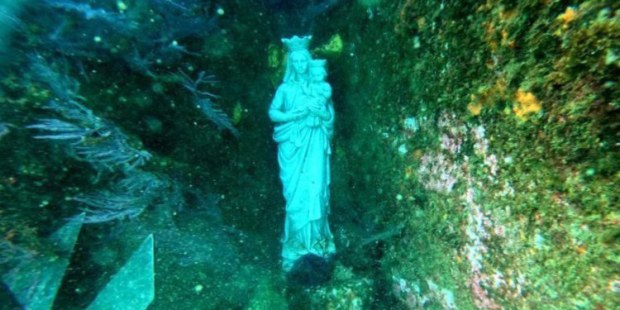 Divers who discovered it were surprised to find the white statue of the “Queen of the Seas” among a tapestry of grasses and seaweed.

Last Thursday, the Spanish Navy’s Ferrol diving unit was training in the Ria de Marín (on the northwest coast of Spain) when divers were surprised by a discovery of great beauty.

The Ferrol Diving Unit belongs to the Maritime Action Force group of operational units. Among its various tasks, they are responsible for the protection of the “Submerged Archaeological Heritage”, the location and registration of all material found in the maritime area under the jurisdiction of the Ferrol Maritime Action Command.

Among the divers was Pablo Perales, who spoke with Aleteia and told us firsthand about the startling discovery.

In the Ria de Marín, specifically north of The beach of Punta Corveira, are the islet Castiñeira and the shallows of Cabezos de Arcade, about 600 meters from the shore.

The Ferrol Diving Unit was carrying out physical training activities in this area, when at the bottom of the sea, at a depth of about 33 feet, they encountered two other divers who were believed to be inhabitants of the region. They indicated by gestures that they wanted to show them something. They took them to a cave, which had a statue of Our Lady of Mount Carmel at its entrance.

The white statue, enthroned as Queen of the Seas among a tapestry of grasses and seaweed, stood out strikingly. The origin of the figure is not known, nor how it got there. It is only known that the same locals who showed the statue to the Spanish Navy Diving Unit found the figure half-buried in the sand at the bottom, in the same place.

Our Lady of Mount Carmel is the patron saint of seafarers, including fishermen and the Spanish Navy. For this reason, she is called the queen and the star of the sea, “Stella Maris”. In many towns and villages along the Spanish coast, her feast day is celebrated with maritime pilgrimages on July 16.

A tradition of submerged statues

Statues placed under water are a tradition all over the world. In Spain alone, many statues of various advocations of the Blessed Virgin Mary populate the seabed. Some are sometimes taken ashore to be worshiped with great faith and devotion by groups of divers; others, like this one in Ria de Marín, still remain underwater.

Among other places in Spain, there is one in Malaga, in front of the Malagueta beach. This figure of Our Lady of Mount Carmel, 28 inches tall and weighing 143 pounds, has her chapel 33 feet below the sea. Once a year, she is brought to the surface for public devotion.

A marble statue of the patroness of Algeciras, Our Lady of the Palm, is also submerged by Rinconcillo Beach.

The same happens with a bronze image of Our Lady (the “Santina”) of Covadonga, which is submerged at the bottom of the waters of the old port of Cudillero.

The various invocations of the Virgin under the sea have great popularity all over the world. The places where they are placed have been and are a place of prayer for many parishioners.

May the submerged sculpture found in the Ria de Marín, in the pleasant vastness of the sea, inspire us to bow reverently before her sacred image and see her as our Mother and Patroness, “Star of the Sea”.