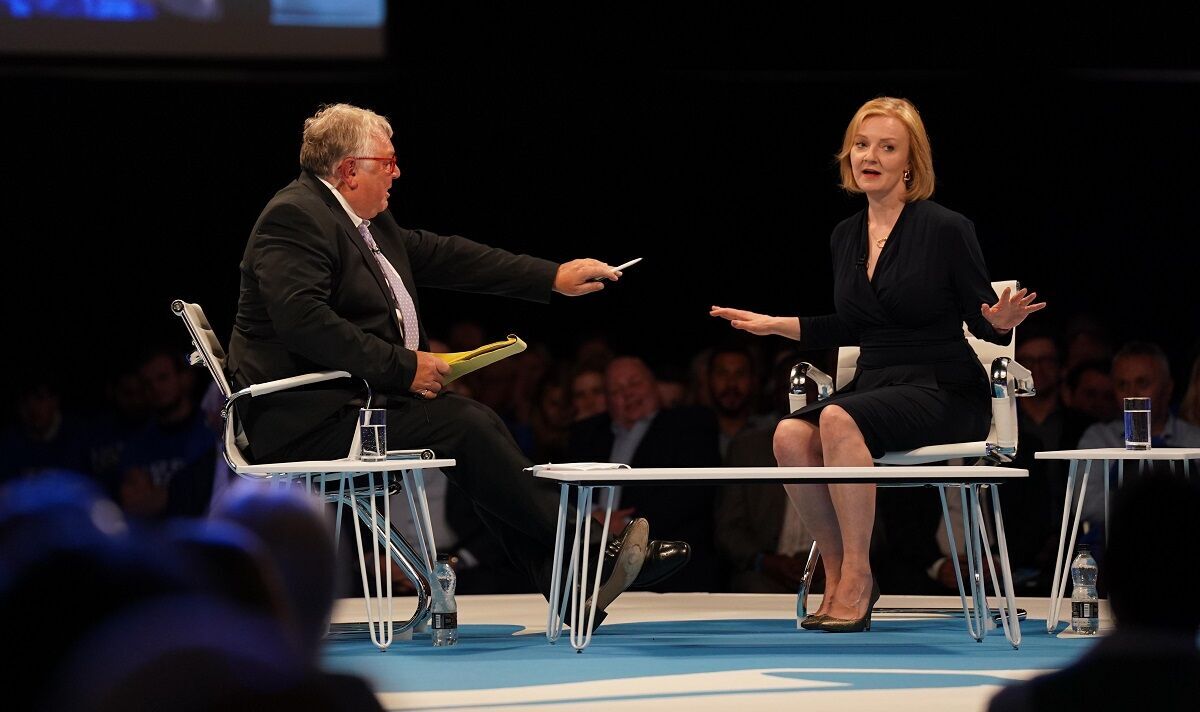 It’s not like it’s exactly a new experience for party members. The Conservatives have had four different leaders in the last six years alone. Something in their DNA compels them to campaign like their life depends on it, to win (sometimes against the odds), to put out the bunting and pop the champagne corks to welcome the smiling winner across the threshold of the number 10…only for the turf take them out at the first opportunity.

The winners might be smiles for some, but for conservatives it seems like it’s just fair game.

But back to Leeds and the conference center near the football ground, where members took part in the first official party roundups and came face to face with Rishi Sunak and Liz Truss.

They peppered them with questions – with me as moderator.

The stage and decor were compelling like an American primary, with smooth videos playing for each contestant.

The heavyweights of the party then presented their choice.

For Mr Sunak, it was ‘local boy’ David Davis (Haltemprice and Howden) who spoke of his man’s bravery in the fight for Brexit when many others bowed to pressure from in high.

For Ms Truss, it was James Cleverly, who touted her colleague’s stoicism in standing up to Ukraine and her skill in closing trade deals.

Then it was time for the “real deal” and the two to take the stage.

It turned out to be a challenge though. Positioning a stage “in the round” can be great for a play or concert, but it’s something of a hurdle for a politician looking to win the hearts, minds and votes of over a thousand people. people around them on all sides.

Kudos to them both as they quickly mastered it and managed to engage with the audience on all fronts.

Speeches over, it was question time – separately – for both of them.

The first was former Chancellor Rishi Sunak, who deployed his Treasury experience at every opportunity. Bolstered by his numbers, he won support for his pledge to help local businesses and his assurances about the handling of the nation’s finances.

But there was an elephant in the room to be addressed: Why had Mr Sunak ‘stabbed Boris in the back’. Taking it on the chin, Mr Sunak explained that he felt unable to maintain the necessary good bond between the Prime Minister and his Chancellor and therefore had no options.

His candor earned him some applause, but you could feel that some still resented him. Then it was time for race leader Liz Truss to take the stage.

While Mr Sunak is a local MP for Yorkshire (Richmond, 59 miles down the road), here is the candidate who was brought up and schooled in Leeds, although she decided to disparage the school, teaching and the region.

And that was one of the questions.

Why had she pretended to have been in a full ‘bog standard’ on the wrong side of the tracks, when in fact properties are selling for north of £1m in the area?

Tackling it head-on, she offered a full apology and the audience relaxed. Her pledge to fight for single-sex toilets in schools was the most applauded of the night and her loyalty for not leaving Boris was dutifully recognised.

The range of questions had been remarkable. From cruelty to greyhounds to fighting benefit fraud, to welcoming more Ukrainian refugees and job opportunities for retirees.

It was the first of 11 roundups to be organized for Tory MPs and no one can claim a murderous punch was landed.

It is in all of our interests that the right candidate wins.

There has been an outbreak of thatch issues at Greater Manchester Police, where new Chief Constable Stephen Watson is cracking down on the appearance of officers who serve under him.

For female officers, “you tie your hair up” and, if you are a man, “you shaved, you iron your clothes, if you know how, you polish your boots”.

But here’s the truth about it: Police Chief Watson took over a failing police force in June 2021.

Under his watch, 999 call handling times were halved to 29 seconds, arrests jumped 61%, and crimes solved increased by 21%, meaning an additional 29,000 suspects were hacked.

Surely a “smart” approach to directing a force towards anyone.

Much of the country was virtually paralyzed by the railway workers’ strike. Unions are demanding pay rises for their staff and in some cases they are right.

Many workers are paid low wages and have not seen a pay rise for three years. But equally, many are earning decent wages and have good pensions in the pipeline.

What unions might like to remember is that keeping the rail system on life support for two years cost taxpayers £16billion. An ounce of gratitude wouldn’t hurt.

cry Me A River

As the scary prospect of a nationwide garden hose ban draw ever closer, it has been revealed that England’s water companies are losing up to a quarter of their supply every day.

With the very real prospect of a drought in August, the country’s nine water companies are losing 2.4 billion liters of water every day.

To put that into context, that’s the equivalent of 1,000 Olympic swimming pools washing unchecked down the drain hole.

If bans are imposed and if it is anything like previous years, fines will be imposed and helicopters will rush in to check if you are watering the garden, to which you have given countless hours of love, care and attention.

Meanwhile, over the past two years, chief executives of English water companies have received a total of £24.3million.

Where I guess the phrase Cry Me A River comes from?

A few years ago, there was an advertising slogan for the oil giant Shell which read “It’s fine, it’s fine Shell”.

Given Shell boss Ben van Beurden’s response that we all have to come to terms with rising prices as they take money out of wheelbarrow loads, perhaps the headline ‘It’s going well’ should be taken up again , you can all go to hell”.

Although a region that produces many decent wines, New Zealand is often overlooked. So if you want to experiment, the Left Field Albari is £10.79 at Waitrose.

Overview of news from around the world.