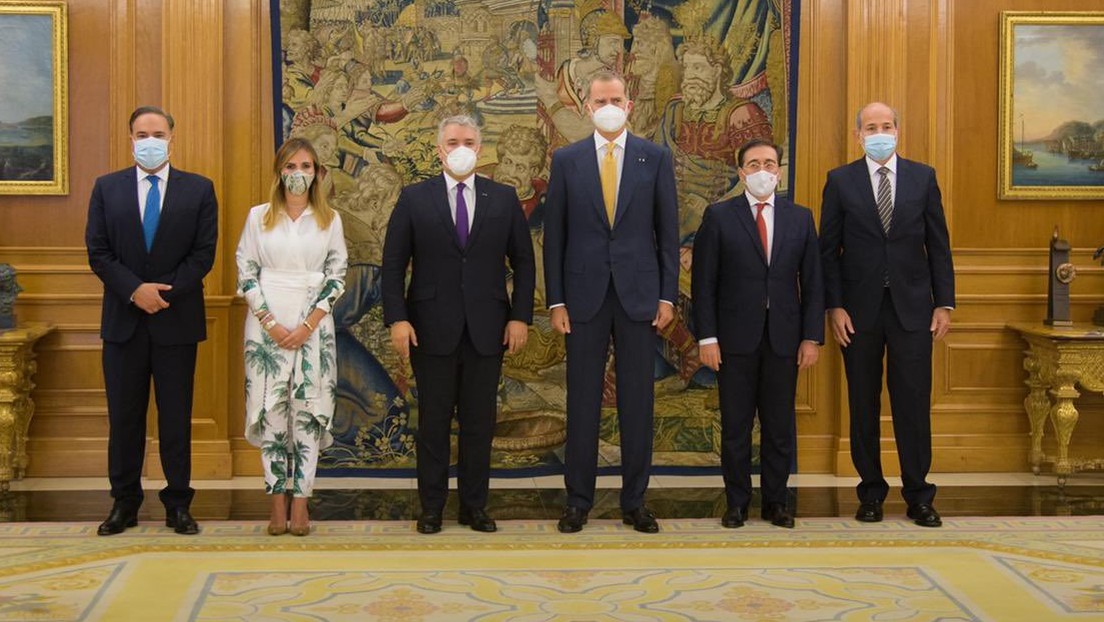 The Spanish government decided last Tuesday in the Council of Ministers to grant the President of Colombia, IvÃ¡n Duque, the Grand Cross of Isabella the Catholic, the second most important decoration of the Order of King Felipe VI.

The news broke this Thursday and caused a stir, although it was a protocol tradition, since all Colombian presidents have been distinguished either with the Necklace, the highest distinction of this Order, or with the Grand Cross. This is what happened with Ãlvaro Uribe (2005) and Juan Manuel Santos (2015).

This concession led to the rejection of various sectors. One of them was that of United We Can (UP), a minority partner of the government led by Socialist Pedro SÃ¡nchez, whose ministers voted en bloc against this measure, according to the Spanish press.

No decoration to a government which must answer for its responsibility and put an end to impunity. Justice for the victims and for all the Colombian people who demand peace, rights and social justice. Today, always: solidarity with the Colombian people. pic.twitter.com/zx1SPubtsc

Last Sunday, a demonstration was held against the visit of Duque in which the head of the international area of â€‹â€‹Podemos and MEP, Idoia Villanueva, argued that his training was contrary to the awarding of “no medals of an order from the king to the one who imposed the cloak of impunity as they murdered their people“.

The award to IvÃ¡n Duque, an effective repressor and champion of the violation of the rights of the Colombian people, is published in the BOE. Today we are a worse country ðŸ˜¥ pic.twitter.com/tGrU1K9FUM

The Colombian president is held responsible for the repression protests that began in April as part of the national strike and the disproportionate use of force which left 51 dead, more than a thousand injured and dozens of citizens missing.

Rejection of the Colombian diaspora

Social movements rejected the announcement of the prize, recalling the dead and injured from two months of protests and mobilizations, which began in April, following clashes with public forces.

Part of the Colombian community abroad has also expressed its refusal to see Duque receive this recognition. Protests have already taken place around the Madrid Book Fair, whose organization has been controversial in an edition, number 80, which has Colombia as a guest country.

?? #NOW ðŸ”¥ Here, one of the reasons for the decoration that Spain made to dictator IvÃ¡n Duque, is the only one that turned rivers into cemeteries, every day in Colombia there are corpses of social leaders, of natives, demonstrators and signatories to the peace agreements pic.twitter.com/x2Gi8fezuh

Colombian journalists and writers have assured that the Colombian ambassador in Madrid, Luis Guillermo Plata, had banned important literary figures because of their political positions and their criticism of Duque’s management.

This was declared a few days ago by Winston Manrique Sabogal, a Colombian journalist who writes for the Spanish magazine W MagazÃ­n and who published an article in which he denounced that recognized figures of letters were excluded from participation in the literary encounter.

Laura Restrepo, Piedad Bonnett, HÃ©ctor Abad Faciolince, Juan Gabriel VÃ¡squez, Pablo Montoya or Pilar Quintana are among the writers who were not invited to participate by the Duque executive. The Vice-President of Colombia, Marta LucÃ­a RamÃ­rez, argued that â€œit was considered that they they no longer needed a presentation in societybecause they already know them well enough. â€œThe controversy had worsened previously when the Colombian ambassador had maintained that the list of writers had been drawn up so that the presence of his country at the Spanish event was writers “neutral “.

Tour of Spain and the USA.

IvÃ¡n Duque’s visit to Spain began this Thursday morning, while he was received by Felipe VI in the Zarzuela Palace. Subsequently he has meeting with President Pedro SÃ¡nchez in Moncloa and, at noon, he attended a lunch in his honor offered by the Spanish monarchs.

The Colombian president’s Friday agenda includes a commercial act organized by ICEX, the public company responsible for promoting the internationalization of Spanish companies, in collaboration with the Spanish Chamber of Commerce and the Spanish Confederation of Commercial Organizations (CEOE) in collaboration with the Colombian Embassy in Spain, ProColombia and House of America.

In the afternoon, Duque plans to go to the Madrid Book Fair. At first it was assumed that he wanted to present his book on this stage, although the president denied this version in an interview with RCN Radio.

At the weekend, the Colombian president will visit the US capital, Washington, where his first meeting with President Joe Biden.

Subsequently, he plans to attend between September 20 and 23 at the 76th United Nations General Assembly, where he will report on progress made in the implementation of the Peace Agreement.