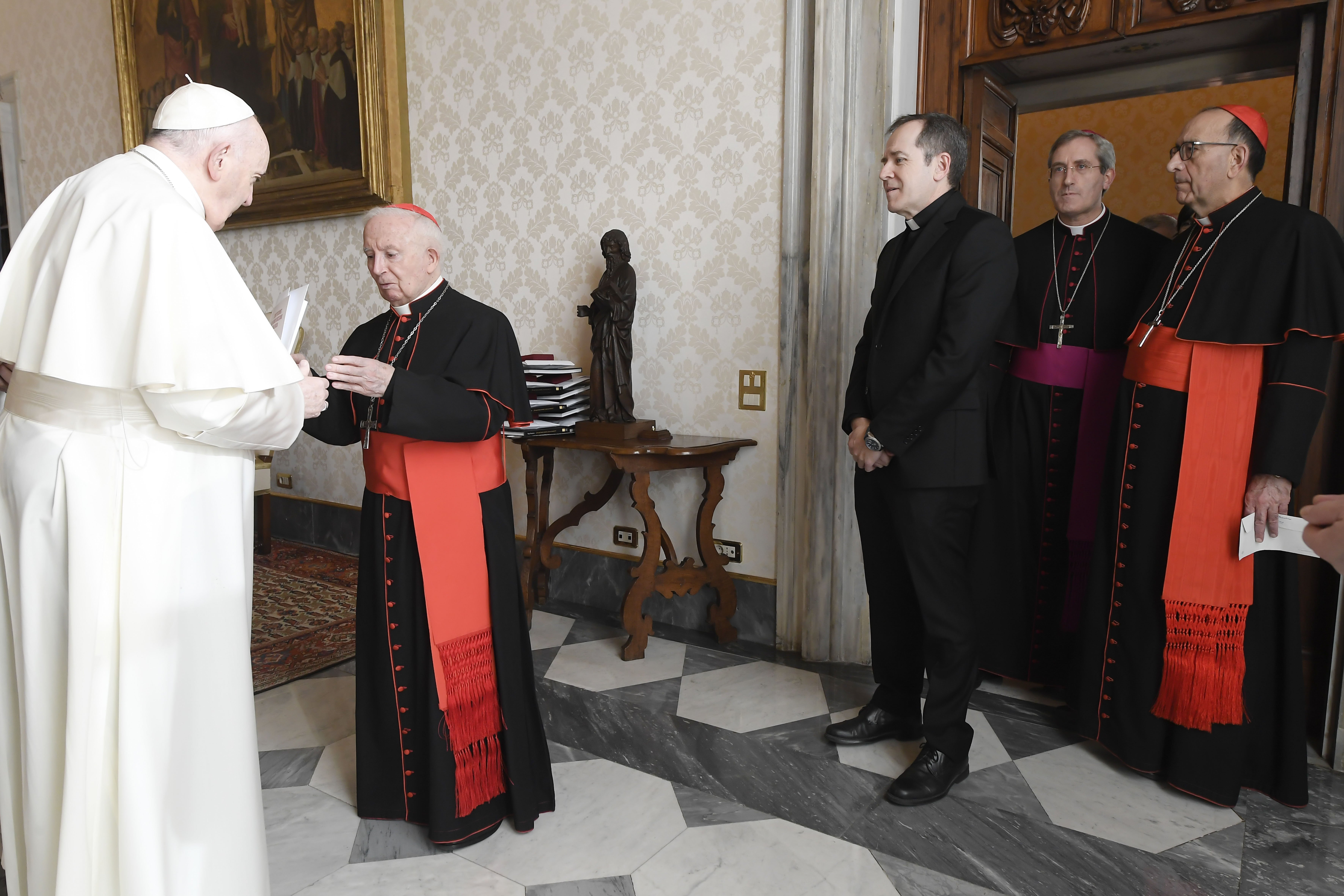 At a press conference in Rome after their meeting with Pope Francis, the Spanish bishops said a national newspaper which had collected 251 allegations of sexual abuse involving the Catholic Church had done a “service”.

“Sometimes we didn’t communicate well,” Cardinal Juan Jose Omella, archbishop of Barcelona and president of the Spanish bishops, said on Friday. “El País rendered a service, we received it and the people [at diocesan level] took advantage of it and we are grateful for it.

“We are paving the way to approach the victims with dignity and always with respect for those who have suffered. We must look at the victims, look to the future and be proactive, to resolve [the crisis] and get closer [to survivors]“, Omella said.

He also said he hoped for the abuses perpetrated by Spanish clergy but also by religious and lay people in Church-related settings, from parishes to schools, but said that “for now” the bishops did not plan to convene an independent commission. commission, as was the case for the Church in France and as Portugal announced in December.

“Faced with the problem of abuse, we all feel the great pain” caused by these crimes, both for the victims and for society as a whole. However, he maintained, each diocese has set up a commission to collect the allegations, accompany those “who feel hurt” and “prevent such things from happening again in the future”.

Omella, who led the “ad limina” visit of the second group of Spanish bishops to the Vatican, explained that the report of El País, delivered by hand to Pope Francis during his trip to Greece and Cyprus last December, has been sent to all the dioceses of the country as well as to religious orders.

“All the dioceses are reacting little by little. They responded to El País asking them to send data because in some cases there is no data,” Omella said. (“If) there has been an accusation from a priest or cleric, say who it is and we will investigate.”

According to the newspaper, the investigation presented to the Pope is “unprecedented” for the Church in Spain, as it includes allegations made against 251 clergy and some lay people in religious institutions of sexual abuse of minors. The investigation was opened in October 2018.

The investigations will have to branch out according to the competent ecclesiastical entity, since they concern 31 religious orders and 31 dioceses.

Several unnamed sources consulted by Spanish media claimed that because victims and survivors approached the newspaper, but not the Church, any quick response to the accusations was virtually impossible. For example, the Catholic weekly Vida New spoke of a lack of “fair play”, citing a source as saying that when the El País contacted church authorities, they ignored requests to be bridges between the institution and those making the allegations.

This helps explain why the episcopal conference has distanced itself from the investigation, saying that while it encourages reporting by victims of clerical sexual abuse and welcomes initiatives to end the problem, “greater rigor “would have been desirable on the part of the victims. El País, one of the main Spanish newspapers.

“It would be desirable for the accusations contained in the aforementioned report to have greater rigor, because its content, of a very disparate nature, makes it difficult to draw conclusions that could be used for a possible investigation. Especially when the names of the defendants are missing, the years in which the abuse took place or refer to people who died,” the conference said in a statement following the newspaper’s publication of a summary of what they said. they found.

The newspaper did not publish the full findings of a three-year investigation, but it did hand over a 385-page dossier to Pope Francis. The number of victims is at least 1,237 but could reach thousands. The oldest case dates back to 1942 and the most recent to 2018.

“In all the dioceses, we act with the greatest prudence, which the Holy Father has ratified. Caution, El País was not careful. It is not prudent to denounce without giving data”, declared the cardinal of Valencia, Antonio Cañizares, starting from the apparent harmony that Omella was trying to demonstrate on the attitude of the Church towards the abuses after to meet, for more than two years and a half-hours, with Pope Francis.

Omella confirmed that the issue of sexual abuse and the investigation by El País was discussed with the pope as well as with officials of the Congregation for the Doctrine of the Faith.

“At the level of an episcopal conference, there is a service intended to help small dioceses that do not have personnel who can help” investigating the allegations, the cardinal said. But “we felt that a more human and closer approach would be for each diocese to have its own office and for the Holy See to agree”.

Traveling to Madrid from all corners of Spain to make an allegation at the headquarters of the bishops’ conference, Omella explained, would be complicated, and solving problems locally, on the other hand, would facilitate the realization of said investigation and the support for survivors. .

“Portugal is doing what they think is right, like France, Germany or Italy…we are in contact with the Holy See with their protocols and they have agreed. If there is a difficulty, we will see it as we go, ”he said.

“In all the dioceses we are acting with the utmost caution, which the Holy Father has ratified,” Cañizares said.

The prelates met with Francis for more than two hours, following a tradition of an episcopal conference visiting the pope and the various offices of the Roman curia every five years. Due to the pandemic, many of these visits have been postponed. In the case of the Spanish bishops, they were missing two prelates, who had to stay after testing positive for COVID-19.