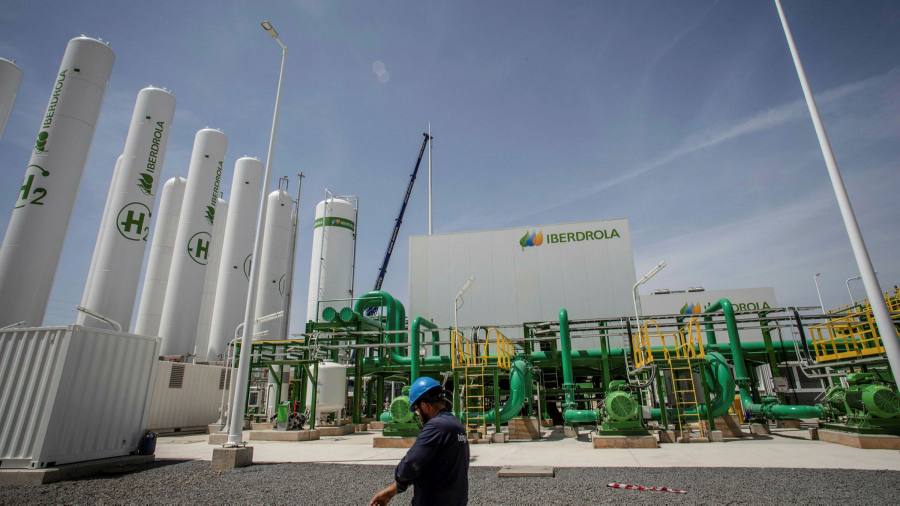 A new green hydrogen plant in Puertollano, south-central Spain, shows both the grand ambitions – and the obstacles – the country faces in its quest to become a European hub for this automotive fuel from the future.

After an investment of 150 million euros, Puertollano has the capacity to be the largest supplier of green hydrogen for industrial use in Europe, with an electrolyser producing 20 megawatts of hydrogen. Green hydrogen is a carbon-free fuel created from renewable energy rather than fossil fuels, and the new plant will eventually be able to produce 3,000 tonnes of it.

But, as it has not yet received EU certification and grants as an Important Project of Common European Interest (a term for strategic investments), it is not yet “economically viable” and does not therefore not work, explains Millán García-Tola, director of hydrogen at Iberdrola, the Spanish energy group that built the plant.

Spain, however, has the ideal conditions to become the European hub for green hydrogen, according not only to sector analysts, but also pedro sanchez, Prime Minister of the country. He cites high levels of public and private sector investment in facilities as part of the country‘s 70 billion euro Covid recovery plan, while energy experts note strong supplies of renewable energy and gas infrastructure. existing.

Spain, as a hub, could thus provide the whole continent with a cleaner energy mix and help free it from its dependence on Russian gas.

And some companies are starting to think Sanchez might be right.

Among them is the American automobile and heavy equipment manufacturer Cummins. The Indiana-based multinational develops alternative fuel engines and, together with Iberdrola, has announced a 50 million euro plant in Spain to manufacture electrolyser systems to produce green hydrogen.

But will green hydrogen exports – and hydrogen vehicles and ships – soon play a significant role in Spain’s future?

Electrolysers use electricity to break water down into hydrogen and oxygen, and Spain has the advantage of a large renewable energy sector which supplied almost 47% of its electricity in 2021.

“Spain has many characteristics of countries that can be champions of green hydrogen exporters,” says Gonzalo Escribano, head of the energy and climate program at the Elcano Royal Institute, a think tank in Madrid. In addition to abundant and cheap renewable energy, he points to the country’s extensive network of liquefied natural gas (LNG) terminals and pipelines, as well as an existing industrial base that works with the gas industry.

These advantages have led the Spanish government to make a big bet for the country to become a leading producer of cheap green hydrogen – both to sell and make available to industry – as well as a supplier of machinery for produce the fuel.

The Spanish plan – funded by the European coronavirus recovery fund – includes 1.55 billion euros for green hydrogen over the next three years. In May, during a presentation of the Cummins-Iberdrola plant, Sánchez said that Spain was “in the best position to be not just another hub, but the green hydrogen industrial hub in Europe”.

The Prime Minister’s enthusiasm finds an echo in the local industry. Maarten Wetselaar, chief executive of Spanish multinational oil and gas company Cepsa, imagines that Spain acts as a hub for hydrogen, much like Rotterdam does for oil. Similarly, Arturo Gonzalo Aizpiri, director of Spanish energy company Enagás, notes that a “hydrogen-ready” gas pipeline to France, which is on the drawing board, could transport 10% of annual hydrogen consumption. of the EU by 2030.

However, several obstacles stand in the way of progress.

The price is the most important of them. The Spanish government estimates that domestic industries, such as chemicals and fertilizers, consume 500,000 tonnes of hydrogen per year. This “grey” hydrogen, extracted from natural gas, costs barely €1 to €1.50 per kilo. Green hydrogen from water, in comparison, costs between €5 and €7 per kilo, which is not competitive.

“We need to make more efficient electrolyzers to reduce the cost of a kilo of hydrogen by 50%, to make it fully competitive with gas,” says Aizpiri, who sees hydrogen production increasing by “an amount extraordinary” in the middle of the decade, after a slow start. Enagás opened a green hydrogen plant on the island of Mallorca in March.

A second key challenge is the transport of hydrogen in Spain and abroad. It is lighter and more corrosive than natural gas, so current pipelines can only handle a 10-12% mixture of hydrogen and natural gas. Hydrogen can also be liquefied and shipped like natural gas, but must be cooled to -260°C, which is 100 degrees below regular LNG.

“In the medium to long term, you will have liquid hydrogen ships that will go around the world,” predicts an energy industry chief. However, he adds that it will take 40 years to transform the entire energy system.

A prevailing opinion is that, in the short term, Spain should moderate its hydrogen targets. “We live in a bubble of green hydrogen,” says García-Tola. “We are looking for uses that don’t make sense.”

He sees some applications in transport, although these seem quite limited. For example, there are currently eight green hydrogen buses powered by Iberdrola in the city of Barcelona.

Fertilizer production is a more obvious opportunity, and Garcia-Tiola suggests green hydrogen could replace natural gas in industries that require extreme heat and therefore cannot be electrified, such as steel, ceramics and cement. But to make hydrogen competitive meanwhile will require government subsidies or carbon pricing on dirty fuels, he believes.

“The problem with hydrogen is that it’s long-term,” says Escribano. “We cannot replace Russian gas in a year or two.”

Curious about the FT’s commitments to environmental sustainability? Read more about our scientific goals here