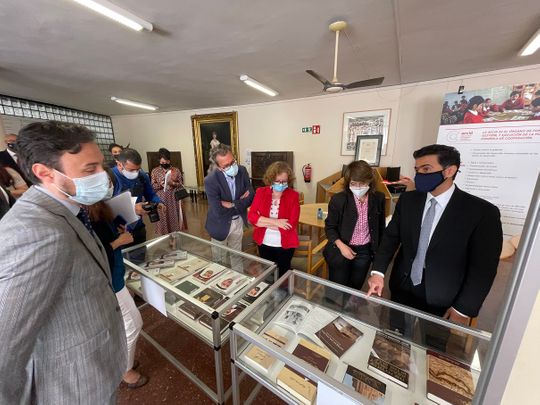 Madrid: Sharjah Book Authority (SBA) and CÃ¡sa Ãrabe (The Arabian House) discussed a plan to promote Arab and Emirati culture in Spain and in Europe at large.

The plan follows the signing of an agreement between the two parties in 2019. The plan includes the organization of joint cultural events at the headquarters of CÃ¡sa Ãrabe in Madrid and Cordoba, as well as the participation of CÃ¡sa Ãrabe in the 40th edition of the Sharjah International Book Fair (SIBF) in November, which will host Spain as guest of honor.

The 2019 agreement was signed on the sidelines of an official visit by His Highness Dr Shaikh Sultan Bin Mohammad Al Qasimi, member of the Supreme Council and Sovereign of Sharjah, to Madrid in October 2019. It aims to strengthen collaboration between Sharjah and Spain in several areas through their regional and international networks as well as cultural exchanges through mutually beneficial programs.

The recent discussion was part of a meeting chaired by Ahmad Bin Al Ameri, President of SBA, and Pedro MartÃ­nez-Avial, Managing Director of Casa Ãrabe, held at CÃ¡sa Ãrabe headquarters in Madrid in the presence of representatives of both parts. The two sides agreed on a series of events showcasing Arab and Emirati culture and literature to be held during Sharjah’s participation in the Madrid Book Fair – LIBER next October.

A highlight of the sessions will be a review of the theatrical works of Dr Shaikh Sultan, including those that have been translated into Spanish. Sharjah will also hold literary seminars to shed light on the creative and cultural movements of the Arab world, including the latest research being conducted on the aesthetics of Arabic calligraphy.

Al Ameri said: â€œIn line with the vision of His Highness the Ruler of Sharjah, we believe that anything based on knowledge and creativity is bound to be sustainable and can be passed on to future generations. With this in mind, we are committed to partnering with the world’s leading cultural organizations and we find CÃ¡sa Ãrabe an ideal platform to share Emirati and Arab culture not only with Spain, but also with the European continent. at large.

MartÃ­nez-Avial said: â€œOur partnership with Sharjah, represented by the Sharjah Book Authority, is a matter of pride and joy for us. We look forward to a future where Spanish and the wider European community have a closer and more lasting relationship that not only promotes the richness of Arab culture, literature and arts among non-Arabs, but puts above all in evidence for them its authenticity and uniqueness, especially since it has had a major influence on Spanish culture.

The ASB delegation also visited the Spanish Agency for International Development Cooperation (AECID), a public body under the aegis of the Spanish Ministry of Foreign Affairs. The tour included meetings followed by a tour of the AECID Islamic Library, which houses rare manuscripts and features a special section featuring Dr. Shaikh Sultan’s publications which have been translated into Spanish and other foreign languages. These publications were presented by SBA at the Islamic Library of AECID when Sharjah participated as guest of honor at the 2019 edition of the Madrid Book Fair – LIBER.

Gervonta Davis beats Mario Barrios by TKO in the 11th round

I will play for Wales until I stop playing football