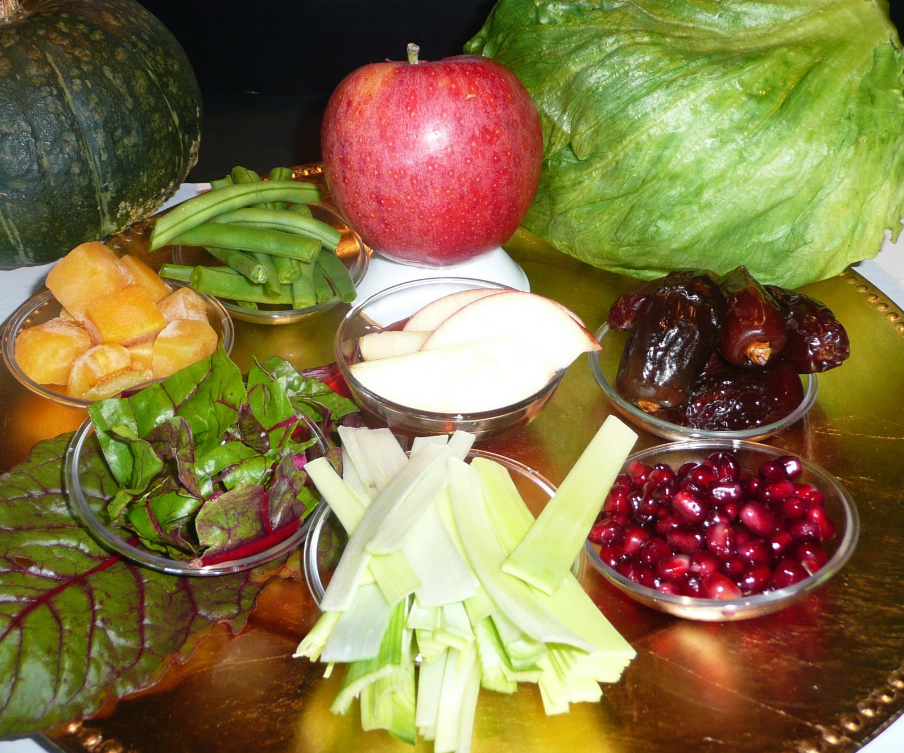 For Sephardic Jewish communities around the world, Rosh Hashanah is a time to incorporate a seder into the observance of the holiday. Like its more well-known Passover counterpart, the Rosh Hashanah seder includes a seder plate with up to nine foods called in Hebrew, simanim, or signs that anticipate hopes and wishes for the new year.

Traditionally, it takes place just before the important meal on the eve of Rosh Hashanah and includes not only a blessing on the familiar honey-dipped apples, but also on lesser-known species like leeks, beans and squash. Much like the Southern tradition of eating black-eyed peas to accompany a wish for prosperity on the secular New Year, each of the foods bears a yeti ratzon that begins each blessing and elaborates a specific idea for the coming year.

At Congregation Or Ve Shalom in Atlanta, which was founded by Jews from the Greek island of Rhodes more than a hundred years ago, the seder ritual on Rosh Hashanah is seen as a way to ensure that the new year starts well. Synagogue rabbi Josh Hearshen even notes that tradition calls for two truly unusual items.

“There is a tradition of adding a sheep’s head that reminds us of the binding of Isaac in the biblical story or a fish’s head. My family usually doesn’t either. So we just add a piece of salmon to our seder plate,” he said.

Fish are said to have a long tradition of being associated with mystical powers such as creation, fertility and prosperity. In the Ashkenazi tradition, a fish dish, such as gefilte fish, is usually served on holidays. The fish head, according to the rabbi, is to remind us that we must lead the way in the coming year and not just follow like the tail of a fish.

Pomegranate juice can be the base of a Rosh Hashanah seder gazpacho soup.

The yeti ratzon in this case reads: “Be it your will, Gd and Gd of our ancestors, let us be a head and not a tail.”

The origin of the practice of the Rosh Hashanah seder is said to have originated over 1,500 years ago in a short passage from the Babylonian Talmud. In tractate Horayot, 12A, Rabbi Abaye spoke of foods such as squash, fenugreek, leeks, and chard as foods that should always be seen on holidays because they grow quickly and should therefore serve “as omens positive over the coming year”.

In some Sephardic houses, blessings over food are followed by a piyyut or religious verse composed by poets of medieval Spain. Sephardic writer Rahel Musleah, who grew up in Calcutta, India, remembers during her seder the poem by 13th-century Spanish author Abraham Hazzan Girondi which contains a refrain after each verse that says, in Hebrew ” Tikhleh shanah ve-killeloteha! May the year end with all its curses! The poem ends with “Let the new year begin with all its blessings!”

The Rosh Hashanah Seder cookbook was written by Sara Gardner during a year-long visit to Spain.

The idea of ​​incorporating a seder into New Year’s rituals is increasingly being taken up by others outside of traditional Sephardic practice. In Atlanta, Rabbi Malka Packer-Monroe, who directs the 18 Doors program for interfaith Jewish couples and individuals, created a virtual Rosh Hashanah seder for the national organization two years ago.

Just before the pandemic hit in 2019, Reform Jewry in Madrid, Spain released “The Rosh Hashanah Seder Cookbook.” The cookbook, in English, was written by Sara Gardner, who works at Hebrew College, a rabbinical seminary in Massachusetts. She was on a Fulbright Graduate Scholarship in Spain when she researched the book. The seder she describes contains recipes that cover the nine common elements on the seder plate, so the Rosh Hashanah seder can become more than just a symbolic observance, but the basis of the meal. We’ve included his pomegranate gazpacho below.

Rabbi Hearshen believes the growing acceptance of the Rosh Hashanah seder is, in part, due to a desire to add more ritual to the holiday. “Rosh Hashanah dinner is simple, isn’t it? But it’s a special night, and the seder adds a little ritualistic flavor to it. I think that really resonates with us. It’s a little more like the Passover, which is the other great meal of the year.

And it can add a little fun too. The rabbi recalls that when he was studying in seminary, one of his classmates brought a piece of celery to the seder and piled it with raisins. The wish behind this, which was not unusual for a student rabbi, was that the new year would bring a pay rise.