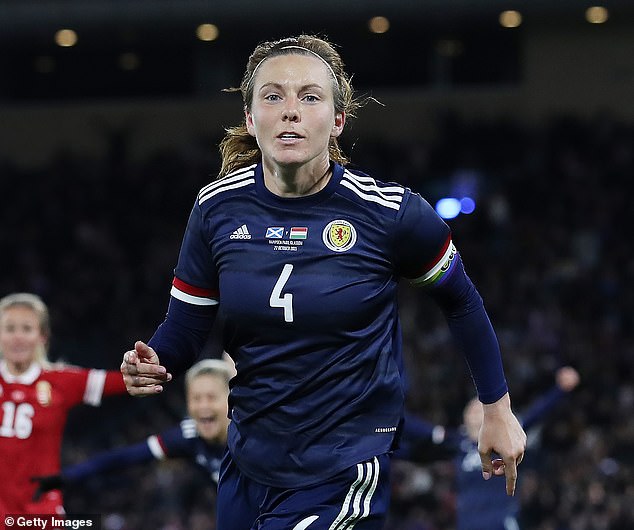 ‘It makes you feel less important than others’: Scotland captain Rachel Corsie accuses SFA of not treating the women’s national team the same as she insists ‘there is a reason why so many players feel frustrated”

By Brian Marjoribanks for the Scottish Daily Mail

Scotland captain Rachel Corsie has accused the SFA of not treating the women’s national team the same – and claims it made them feel ‘less important than others’.

Corsie was among a number of high-profile players, including Caroline Weir and Erin Cuthbert, who tweeted their frustration this week over a cap levied on tickets for Tuesday’s World Cup qualifiers against England. Spain at Hampden.

In what became an awkward public spat, the governing body hit back by saying the players were guilty of “misinformed sharing” and creating “negative headlines”.

The SFA insisted that ticketing procedures were the same across all levels of Scottish football and that every 52,000 seat at Hampden would be made available if demand was there.

They also said their biggest ever marketing spend for a Scotland women’s national team match was allocated to promoting the game against Spain.

But Aston Villa defender Corsie has revealed the team’s frustrations run deeper than the row over ticket sales.

Following the tweets, the governing body says the players are guilty of ‘misinformed sharing’

“I think equality is still something that will have to be pushed all the time, especially for women’s football, to have a chance to catch up,” the 32-year-old said.

“And it may never catch up. You know, men’s football has such a huge start and has built a foundation.

‘There is history. And I don’t think it’s necessarily about catching up either.

“I think there have been things in the past that we have pointed out that have shown that there has not always been equality in all areas.

“I think part of it comes down to the fact that we know the resources are not being provided at the best level.

“Or we know what is considered a high performance level. Compared to what the environments of the two clubs are, what other national teams receive, other teams in the association receive, are not equal to what we get.

“When you realize this, you feel less important than others.”

Corsie said she doesn’t regret the Tweet shared earlier this week by the Scottish players.

She has since held talks with SFA chief executive Ian Maxwell, but hopes their discussion will go deeper than mere words.

“I think now it has to be about the action of those conversations,” Corsie said.

“Conversations have already taken place. It’s very important to have the opportunity to have these discussions, but now it’s about seeing a difference.

“It has to be something that feels. There’s a reason so many players feel frustrated. It doesn’t come out of nowhere.

Last year, the SFA launched a four-year strategic review to 2025, pledging to “accelerate the growth of women’s and women’s football” and take women’s football “to the next level nationally and international”.

As part of this, the women’s team have played all of their World Cup qualifiers at Hampden this campaign.

However, Corsie says the elite environment around the women’s team must continue to improve.

She said: “We have sacrificed a lot over the last five, ten, 15 years. It’s still something that you constantly fight and take on as a female athlete to push back the barriers, to push the limits, to work hard to be successful so that you can ask for more.

“It’s probably a constant cycle and it will continue to be a battle.

“A lot of things the SFA have done – like the fact that we’ve been playing at Hampden – show a lot of progress, but there’s still a lot of things happening on a day-to-day basis where you can see there are still means go.’