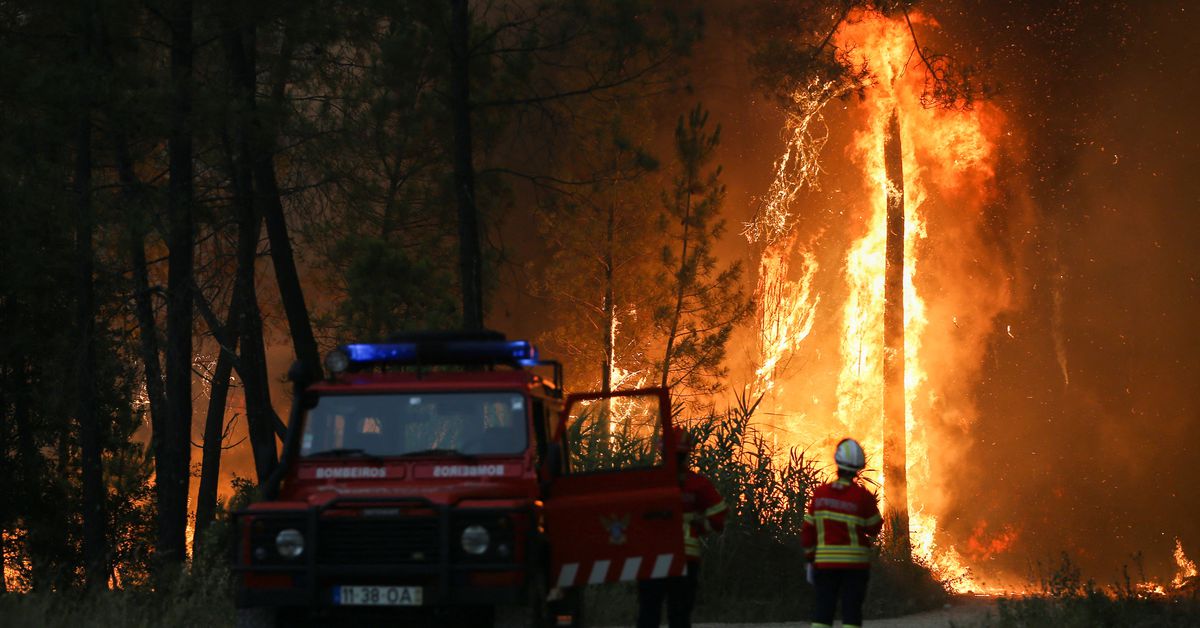 LEIRIA, Portugal, July 13 (Reuters) – More than 20 wildfires raged across Portugal and several burned in western Spain on Wednesday, threatening villages and disrupting tourist vacations amid a heat wave that meteorologists say will push temperatures into the 40 degrees Celsius range.

In France too, around 800 firefighters, supported by six water bomber planes, were fighting two forest fires in the south-west, which have already caused the evacuation of thousands of campers, said the prefect of Gironde Fabienne Buccio .

In Portugal’s southern Algarve region, popular with tourists, authorities blocked access to the luxury resort and golf course of Quinta do Lago as thick plumes of smoke rose from a neighboring area.

“A fire enters an urban area, with a lot of dry vegetation which, with small sparks, quickly becomes a secondary fire. We are worried and that is what we tell people,” said Richard Marques, a police officer. civil protection in the area.

In the central district of Leiria, north of Lisbon, where temperatures soared to 45 degrees Celsius (113°F), authorities blocked a major highway. Flames and thick smoke were visible on both sides of the road, while helicopters and planes dropped water.

Villagers who were not evacuated poured water on the roofs of their houses.

Nearly 800 firefighters were fighting two active fires in the region, while across mainland Portugal 2,124 firefighters, supported by 28 aircraft, were battling 24 wildfires.

Almost all of mainland Portugal was on red alert for extreme heat conditions, with the highest temperatures of 45C in the central districts of Santarem and Leiria, the meteorological institute IPMA said. The country‘s record temperature of 47.3°C was recorded in 2003.

More than 2,700 hectares have been burned so far in France’s Gironde region, Prefect Buccio told BFM TV. The larger of the two fires is around the town of Landiras, south of Bordeaux, where roads have been closed and 500 residents evacuated.

The other is along the Atlantic coast, near the iconic “Dune du Pilat” – the highest sand dune in Europe – located in the Bassin d’Arcachon region, above which heavy clouds Black smoke was seen rising into the sky.

This fire led to the preventive evacuation of 6,000 people from five surrounding campsites. They were taken to safety at a local exhibition center.

“Other campers woke us up around 4:30 a.m. We had to leave immediately and quickly choose what we were going to take,” Christelle, one of the evacuated tourists, told BFM TV.

On the eve of July 14, the Gironde prefecture banned until Monday any fireworks in towns and villages near forests.

The World Meteorological Organization warned on Tuesday that the heat wave was spreading and intensifying across large parts of Europe.

With human-caused climate change triggering droughts, the number of extreme wildfires is expected to increase by 30% over the next 28 years, according to a February 2022 UN report.

Scorching temperatures also swept across China’s vast Yangtze River basin on Wednesday; firefighters battled a wildfire near the tourist town of Datca in Turkey; and electricity demand in Texas hit an all-time high as consumers turned up their air conditioners to escape the heat. Read more

In the Extremadura region of western Spain bordering Portugal, firefighters evacuated a few hundred villagers overnight as a precaution and continued to battle a blaze that spread Tuesday in the province of Salamanca, in the region of Castile and Leon.

Parts of the regions of Extremadura, Andalusia and Galicia were on red alert for extreme heat, Spanish weather service AEMET said, adding that temperatures could exceed the previous record high of 47.4C for the whole of Spain. Spain established in August 2021, and 40.7°C in the capital Madrid. .