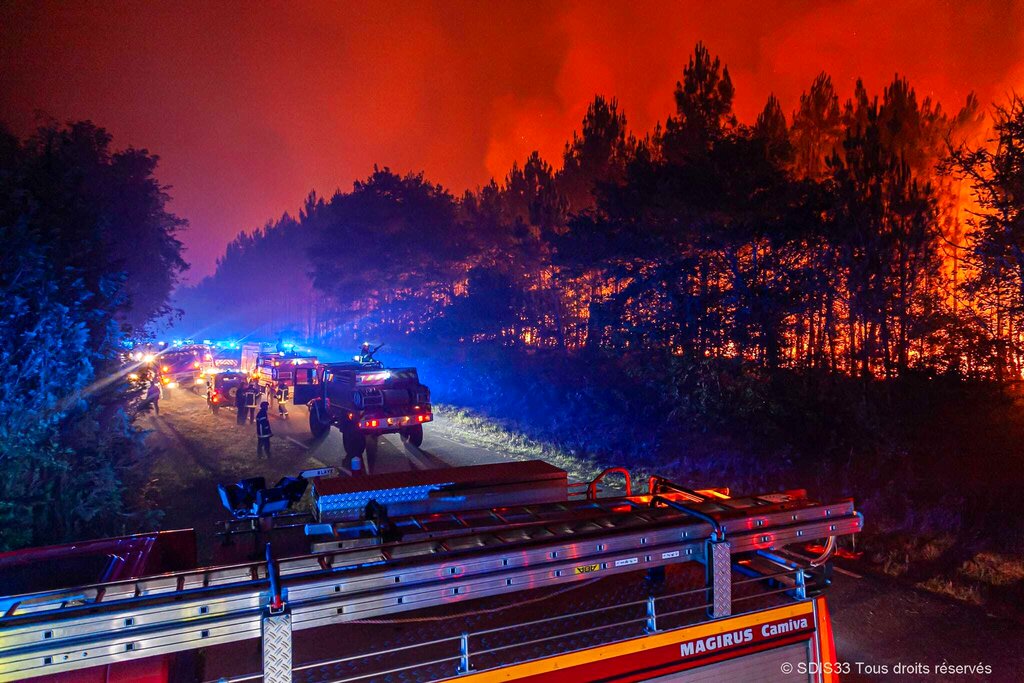 Britain was set to see temperatures hit 40C (104F) for the first time on Tuesday after recording its hottest night on record, as wildfires raged through arid countryside in France, Spain and elsewhere.

As a heat wave that swept across southern Europe last week moved north, southern and western Germany and Belgium also braced for temperatures potentially record high, with many scientists pointing the finger at climate change.

As the mercury returned to more normal summer levels in Spain and Portugal, firefighters in both countries were still battling multiple blazes.

Britain has been put on ‘national emergency’ alert as temperatures looked set to exceed the previous record high of 38.7C recorded in 2019, with extreme heat disrupting travel as some trains were forced to stop and canceled flights.

“We have seen a considerable amount of travel disruption,” Transport Minister Grant Shapps told the BBC.

“We are likely to see the hottest day on record in the UK today, and the infrastructure, most of which was built in Victorian times, was simply not designed to withstand this type of weather. temperature.”

A study published by climatologists in June in the journal “Environmental Research: Climate” concluded that it was very likely that climate change would worsen heat waves.

With human-caused climate change triggering droughts, the number of extreme wildfires is expected to increase by 30% over the next 28 years, according to a February 2022 UN report.

More than 30 wildfires have continued to ravage parts of Spain, with authorities paying particular attention to four blazes in Castile and Leon and Galicia.

In Losacio, in the northwest of Zamora province, where two people died and three people were seriously injured, more than 6,000 people in 32 villages were evacuated.

Dramatic television footage showed flames and plumes of smoke rising into the night sky near the town of Zamora, Tabara.

On Monday, a man trying to save his town from wildfires came close to death when the blaze engulfed his backhoe, forcing him to run for his life while tapping the flames on his clothes.

In Galicia, more than 1,500 people have been evacuated from the path of four fires, with several buildings damaged.

So far this year, 70,000 hectares (173,000 acres) have been burned in the country, about double the average for the past decade, according to official data released ahead of the heatwave.

In neighboring Portugal, around 50 municipalities, mainly in the central and northern regions, were still facing the “maximum risk” of forest fires, according to the meteorological institute IPMA.

More than 1,000 firefighters were battling five major wildfires, the largest of which started in the northern municipality of Murça and spread to two neighboring municipalities.

Hundreds of people were evacuated from villages and an elderly couple were found dead in a burnt-out car on Monday.

Major fires also continued to burn in the Gironde region of southwestern France, where 34,000 people were evacuated.

Some 2,000 firefighters supported by water bomber planes were battling the blazes, which started a week ago and have scorched around 19,300 hectares (47,700 acres).

In Greece, firefighters brought 73 fires under control in 24 hours, firefighters said on Monday. The civil protection authority warned on Tuesday of a very high fire risk across the country.

Photograph: This photo provided by the Gironde region firefighters (SDIS 33) shows firefighters fighting a forest fire near Landiras, in southwestern France, Sunday July 17, 2022. Firefighters fought on Sunday out of control wildfires in France and Spain as Europe wilts under an unusually extreme heatwave that authorities in Madrid have blamed on hundreds of deaths. Photo credit: SDIS 33 via AP.

Receive automatic alerts for this topic.

Juan Rodríguez Cabrillo: Cabrillo National Monument in California: Spain and Portugal clash over the origins of the explorer | Culture