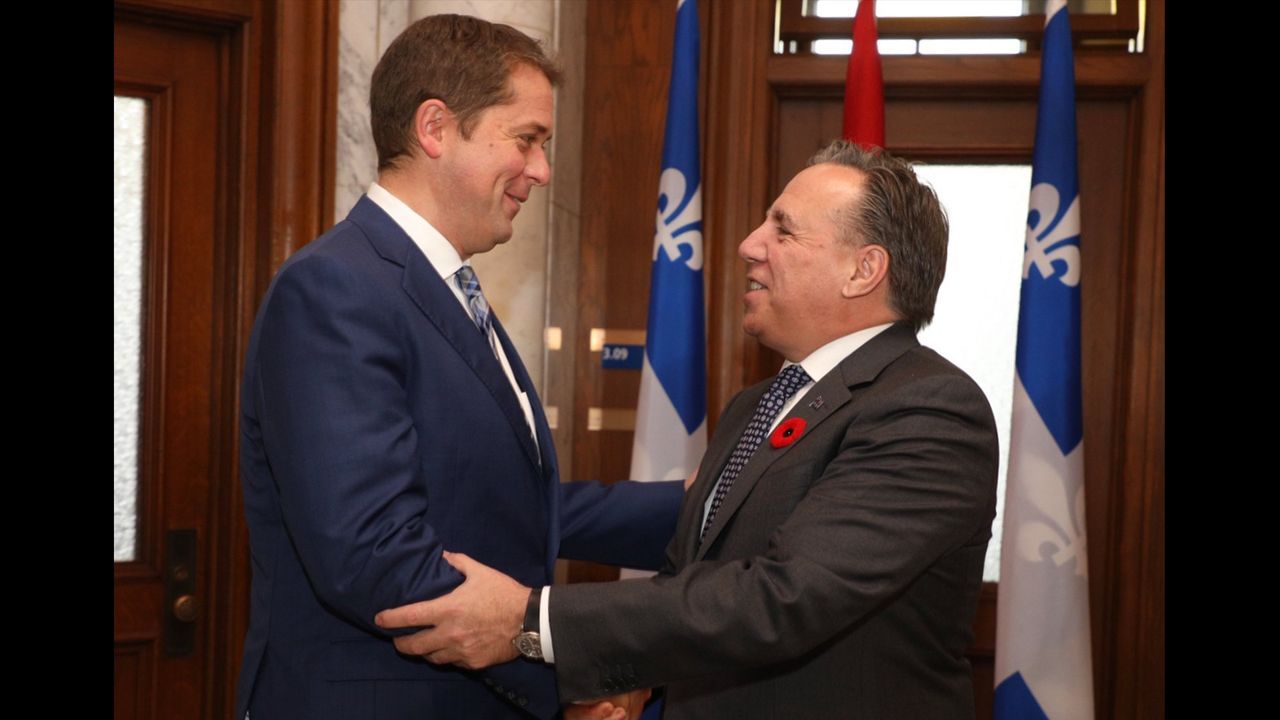 Schools and hospitals in Quebec and Canada have been the target of anti-vaccine protests in recent weeks aimed at intimidating healthcare workers, teachers and students of all ages. These protests are political provocations organized and led by far-right elements seeking to gain political capital by exploiting the climate of confusion generated by the disastrous and anti-scientific response of the authorities to the COVID-19 pandemic.

In a few hours last Thursday, the Quebec government of the Coalition Avenir Quebec (CAQ) passed Bill 105 in the National Assembly with the ostensible aim of cracking down on far-right demonstrations. The new law, which bans demonstrations in health facilities and schools, has won the unanimous support of opposition parties, including the pseudo-left Quebec Solidaire.

The absurd effort by the CAQ to pose as a defender of healthcare workers against the threat posed by the far right is a political cover-up, aimed at concealing the responsibility of Quebec Premier FranÃ§ois Legault – and all orders of government in Canada – for a COVID-19 Policy that prioritized profits over human lives and caused social catastrophe.

As early as April 2020, after a brief containment put in place under pressure from workers, the Legault government demanded the complete reopening of schools, daycares and non-essential industries. This policy aimed at “reopening the economy”, that is, the continuous and uninterrupted flow of profits to large companies.

Legault publicly promoted â€œcollective immunityâ€ to justify his government’s actions. According to this criminal policy, any health measure (social distancing, preventive isolation, confinement) to curb the spread of the coronavirus should be banned because it encroached on the lucrative activities of large companies. Instead, the virus was to be allowed to rampage and infect the vast majority of the population on the false claim that deaths would be “limited” and most people would gain “natural immunity” over time.

Internationally, this homicidal policy was led by the Swedish government and then US President Donald Trump, with catastrophic results in both countries. In Quebec, this led to appalling conditions in nursing homes, which recorded thousands of deaths, and contributed to the province having one of the highest per capita death rates in the world during the first wave of the pandemic.

A general outcry led Legault to stop talking about â€œcollective immunityâ€. But it remained at the center of his ruinous pandemic policy, a policy he pursued with the full complicity of the unions. Legault also enjoyed the unwavering support of the federal Liberal government led by Justin Trudeau and his far-right provincial Conservative counterparts like Ontario Premier Doug Ford and Jason Kenney of Alberta.

Reluctantly, Canada’s ruling elite agreed to some anti-COVID public health measures to prevent the healthcare system from being overwhelmed by a tsunami of infections. But it has systematically sought to reduce these mitigation measures, and they have always been subordinate to its fundamental goal of keeping the economy open to keep the flow of profits going. This combination of laissez-faire (“herd immunity”) and minimal mitigation measures has led to second and third waves of the pandemic, each more devastating than the previous one, and has now resulted in a fourth wave that may yet continue. turn out to be the most ruinous of all. Officially, Canada has recorded more than 27,700 deaths from COVID-19. But when excess deaths are factored in, the actual death toll is closer to 50,000.

COVID vaccines are a major scientific breakthrough and an essential tool in the fight against the virus. But governments in Canada, and their counterparts around the world, have not sought to roll them out alongside proven public health measures such as mass testing, administrative segregation, contact tracing and lockdown to eliminate and eradicate the coronavirus. Instead, they used the vaccines as a pretext to dramatically speed up their back to work and school campaign and to wipe out any remaining public health measures.

The most obvious example is the pan-Canadian return to full education in person, for which Legault was the most ardent promoter. The presence of millions of students, including children under the age of 12 for whom a COVID vaccine is not yet available, in overcrowded and poorly ventilated classrooms has been a powerful accelerator of the fourth wave of the pandemic now sweeping across Canada.

This brief overview of the pandemic policy of the right-wing CAQ government exposes the total hypocrisy of his Bill 105, through which he poses as representing science against a horde of anti-vaxxers and followers far-right conspiracy theories. In truth, the central responsibility for the catastrophic situation the population finds itself in today, with a further surge in COVID infections and hospitalizations, lies entirely with the ruling elite’s criminal policy of “living with it.” the virus â€â€”as Prime Minister Legault cynically proclaimed in his most recent attempt to normalize mass death.

Hypocrisy borders on obscene when Legault defended Bill 105 on his Facebook page by posing as the protector of â€œour nursesâ€. â€œThese women and men,â€ he writes, â€œhave committed themselves body and soul for months to treating COVID patients despite very difficult working conditions. They must now be protected against “a handful of radicals” who seek to “make their lives even more difficult”.

Educators, nurses and other healthcare workers don’t need Legault to understand that anti-vaccine protests are a far-right provocation that must be firmly opposed. But it must be done through their own methods of class struggle – the independent political mobilization of the working class against capitalist austerity and the will of the ruling elite to keep the “open economy” in the midst of a deadly pandemic. .

The deplorable conditions in Quebec hospitals and schools are the result of decades of budget cuts implemented by successive corporate governments â€” Liberal and Conservative at the federal level, and Liberal, Parti QuÃ©bÃ©cois and now CAQ at the provincial level. Added to this is a pandemic that has infected thousands of teachers and health workers left unprotected by a government bent on “reopening the economy” – that is, giving priority to health workers. profits on human lives.

To top it off, last spring and summer, the CAQ government threatened to use anti-strike legislation while relying on the treacherous role of unions to impose public sector contracts that penalize workers. workers with wage increases well below inflation and maintain the mandatory overtime scheme. so much decried by nurses. Thus, it is Legault himself who has systematically worsened the “very difficult working conditions” of the nurses whom he cynically claims to want to protect. As a result, the workload of nurses increases, their psychological distress intensifies, and thousands of people, seeing no other way out, have left the profession.

In addition, Bill 105 threatens democratic rights. It prohibits, within a radius of 50 meters from health and educational establishments, any event “related to health measures (…) or any other recommendation related to the COVID-19 pandemic”. Incitement to organize such events is also prohibited under pain of heavy fines.

The broad language restricting “health measures” protests could be used not only against far-right anti-vaccine protesters, but also against teachers or parents who oppose the dangerous reopening of schools and demand it. distance education, or against any publication which publicizes or welcomes such an initiative.

The fact that far-right activists roam the streets and seek to intimidate workers, parents and students must be taken by workers as a serious warning. In Canada, as internationally, these elements are increasingly emboldened and aggressive, as evidenced by the emergence of far-right parties in Europe, including the AfD (Alternative for Germany), the Vox party. in Spain and the Fratelli d’Italia party. The danger of the far right is best illustrated by Donald Trump’s attempt to overturn the outcome of the US presidential election through a coup plot involving much of the Republican Party leadership and sections of the state apparatus, and which was led by the storming of the United States. Capitol building on January 6 by fascists and other far-right extremists.

The rise of the far right is an international phenomenon actively promoted by sections of the ruling class as they prepare to violently suppress the growing resistance of the working class to capitalism, which has been exposed as utterly bankrupt and in conflict. irreconcilable with the basic needs of workers by the COVID-19 pandemic.

To fight against the far right, the working class cannot rely on a capitalist state that attacks democratic rights, and on parties, like Legault’s CAQ, which stoke anti-immigrant chauvinism and Islamophobia and use authoritarian government methods, including anti-worker ministerial decrees and the criminalization of strikes, to uphold the ruling class’s agenda of austerity and militarism. There is a long history of state measures supposedly aimed at the far right which were then used to suppress the working class.

Just as the struggle to eradicate the pandemic requires the independent political mobilization of the working class, so the struggle against the fascist threat must be fought by a mass movement of workers organized in irreconcilable opposition to the capitalist elite, to its state. and to all its political representatives. The political leadership indispensable for building such a movement and for its victory can only be provided by a socialist and internationalist program.