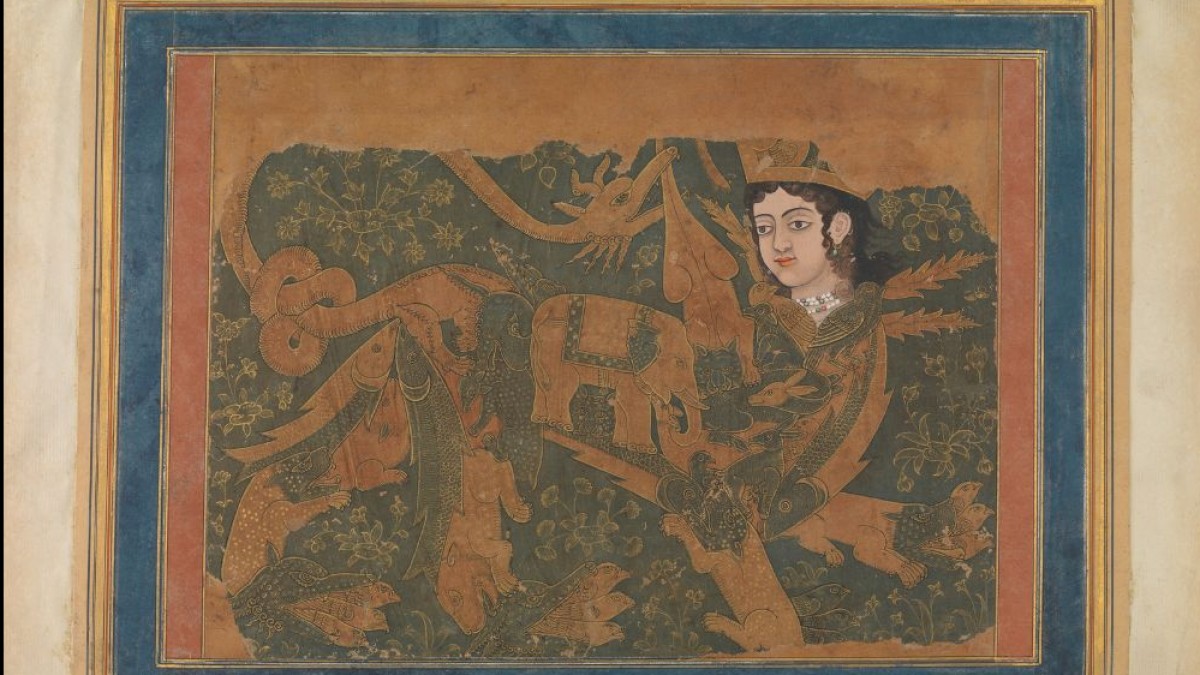 All said and done too, Speaking in Tongues is, all the way, a travel book. A journey through life; a journey, in different ways, around the world. A broadening of horizons, an exploration of the interior and the exterior. A series of moving poems, in more than one sense of the word.

The cover of Kiran Bhat’s Speaking in Tongues: Poems in Spanish, Mandarin and Turkish features a 17th century painting, from the Deccan, of ‘The Fabulous Creature Buraq’. The Metropolitan Museum of Art, in its annotation, describes the Burak like the beast on which the Prophet Muhammad made his night journey (from Mecca to Jerusalem and back) as a fantastical being with the face of a beautiful woman and a body made up of an array of creatures. Look closely at the cover, and you may see birds of several species; a leopard; a hare; deer, what looks like a lion, even an elephant.

This is only a representation of the Burak, and it is not the only one. He is often depicted as a white horse, with mighty wings: wings, and the stamina of a horse, to go to the ends of the earth and back.

Deccani paint, however, is more appropriate. On the one hand, it is linked to Kiran Bhat’s own origins in the Deccan Peninsula. On the other hand, the hodgepodge of creatures that form the chimerical Burak here is so much more interesting than just a celestial horse. This diversity speaks in many languages ​​– and yet together, merged into one being, there is a dissonance that is, perhaps paradoxically, also a harmony.

In this sense too, Burak the painting is appropriate: it reflects the various languages ​​(four of them, including English) that make up this collection of poems. And, as a symbol of an epic journey, the Burak reflects the poet’s love of travel, a love that is central to many of these poems.

speaking in tongues comprises three distinct sections. The first part, Autobiographyconsists of poems in Spanish (each poem preceded by its English translation) that trace the life of the author, from his birth in 1990 to 2019. The poems in this section, one poem per year of Bhat’s life, give an intimate glimpse of his childhood, his coming of age, the joys and sorrows so universal but so personal, so individual too.

These verses are not necessarily autobiographical, as prose can be: there are few events here, few landmarks in the passage of the years. There is an anniversary, and there is the fear of the year 2000; but almost all the rest of this section concerns moments which mark the poet’s progression, the dawn of understanding. His realization that he, born to Indian immigrants, is somehow different from his teachers and classmates; the realization, as he gets older, that his sexual orientation is different from what most people around him would consider ‘normal’. The first tentative step to acknowledging that he is gay; is the anxiety of coping with the resulting backlash. The move to New York and the freedom it affords him; the journeys that shape the poet: all these elements together offer an overview of the poet’s life as seen through his own eyes:

Become something between foreign and local
become a nameless existence
Act like the traveling honey fly
side to side
observe
listen
writing
but never fully becoming one thing or another
become fully myself.
(Since 2011)

This philosophical trend dominates the second section of the book, Kiran Speaks. Originally written in Mandarin, these poems grew out of what Bhat describes in the introduction to the section as a comparison of Chinese culture with Indian. While working as an English teacher in Shanghai, Bhat came to ‘realize the differences and similarities between China and India’and reflections on these manifest in the form of these poems, inspired both by the Talks of Confucius and by the writings of prominent Bhakti poets of Hindi literature.

These poems are brief, invariably taking the form of a dialogue. Someone – a writer, an apprentice, a stranger, a frog, Kiran’s boyfriend, Kiran’s mother, Kiran himself, many others – asks a question. A question that can be simple (“Why do I create art?”) or deeply profound, enigmatic, without possible answer (“Who is your God?”). This is followed by the response, what Kiran said. These are among the most deeply insightful poems in the collection, peeling back the layers of the poet’s character and laying him bare (or as bare as he will allow himself to be). Part of it is pure philosophy, the kind of world-embracing, knowledge-seeking wisdom so true of poets like Kabir and Tulsidas. Much of it, however, offers a refreshing approach to philosophy: a more practical course, a more worldly and somehow more real look at life. To the mother who asks if he doesn’t love her, for example, there is the uncomfortable but genuine truth offered as an answer:

I love my mother
Thank you for giving me love
For giving me the means to grow.
But oil and wine cannot mix.
No matter how much a tree supports its branches
If the tree is too close to the roots of others
Young trees perish and die.
(Excerpt from My Mother Asks: Don’t You Love Me?)

Bhat’s understanding of human nature, of what makes people who they are and who they are, also shines through with great intensity in the book’s third and final section, The Book of Travels. Each of these poems, originally written in Turkish, speaks of a country that Bhat inhabited, and who inhabits it, in his own way. They are not hymns to natural beauty, history or culture; they don’t travel brochures written in verse. Instead, these poems are often hard-hitting, brutally honest truths about peoples, lands, nations. And yet, they manage to strike a chord; Bhat is adept at discovering what makes a country what it is, or how its reality may differ from the perception others have of it.

…and we want the whole world for ourselves
for any reason
although we know that it is not ours either.

because we want to be seen.

Sometimes the softer words are easier to hear.
(From China)

Whatever the theme of the poems in speaking in tongues there is an honesty that marks each work. Bhat is outspoken and fearless, his poetry burning.

Also interestingly, he often refuses to color in the lines. The three sections of this book are sometimes ready to use. The poems in Autobiography, for example, are not just about his life, but about impressions, thoughts, and even spaces that are not strictly Bhat growing. While Kiran Speaks is the philosophy section, there is just as much philosophy (even if presented in an unconventional way) in The travel book. And the most memorable travel poem in the entire book, 2013, is part of Autobiography rather than The Book of Travels.

It’s all been said and done too, speaking in tongues is, throughout, a travel book. A journey through life; a journey, in different ways, around the world. A broadening of horizons, an exploration of the interior and the exterior. A series of moving poems, in more than one sense of the word.

Finalists for Victoria’s New Restaurant of the Year Announced