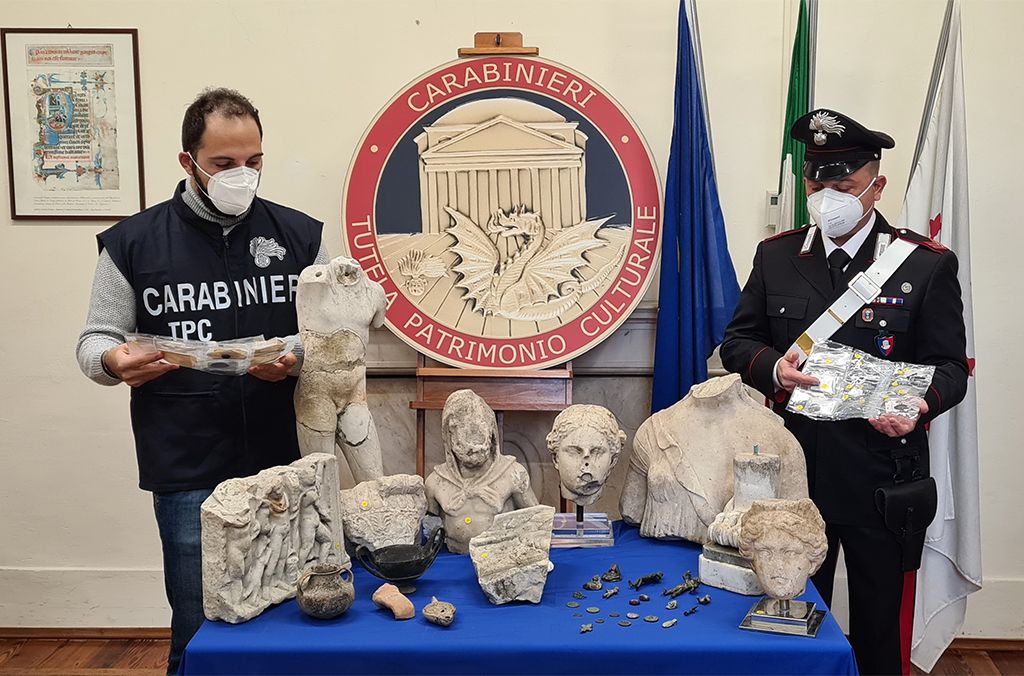 A four-month operation in 28 countries led to the seizure of more than 9,000 cultural objects between June and September last year, Interpol announced last week.

During the sting – the sixth and final phase of what is being called Operation Pandora – investigators from the international crime-fighting organization have stepped up checks at border crossings, airports, houses of auctions, museums and private homes, according to an Interpol statement. Authorities have arrested 52 people linked to the stolen property. More than 170 additional investigations are still ongoing, the organization reports.

Operation Pandora began in 2016. To date, the program has resulted in 407 arrests and the recovery of 147,050 stolen or illegally trafficked goods, reports Harriet Sherwood for the Guardian.

The 2021 Project, reports Sarah Cascone for Artnet News, was a joint effort between Interpol, Europol and the World Customs Organization (WCO), and was led by the Spanish authorities.

Amateur metal detecting has been a popular and profitable hobby for many Europeans in recent years, but some have employed the hobby illegally. Seven European countries have confiscated a combined total of 90 metal detectors used for illicit looting at archaeological sites, according to the Guardian.

Highlights of the past four months include the recovery of a hoard of gold coins dating back to the ancient Roman Empire, according to the statement. Spanish officers discovered the coins at a well-known auction house in Madrid and later identified the archaeological site from which the coins had been looted. In total, the coins could have been sold for around half a million euros (around $550,000) on the black market, authorities note in the statement.

French customs officers also seized 4,231 archaeological objects – including bells, buckles, rings and pieces of pottery – which had been looted by a single individual from archaeological sites. And U.S. Customs and Border Protection officers intercepted a shipment of 13 ancient Mexican artifacts, some dating to the Aztec period, including a skull and two adzes or axes.

One of the items was recovered using brand new technology. Last May, the international police organization launched a smartphone application, ID-Art, which allows users to search through a vast database of more than 52,000 missing works of art and identify looted works, according to the press release.

Using the app, Romanian police were able to identify a 13th-century processional cross that was stolen in 2016 from the museum of the Evangelical Church in Cisnădie. As Andreea Tobias reports for Romanian news source MediaFax via Google-translation, the crime suspect has been identified as a 50-year-old man from Cisnădie. Local legend has it that the first representatives of the Saxon community brought the cross with them when they first settled in Transylvania.

Previous phases of Interpol undercover operations to recover stolen antiquities have resulted in equally large caches of recovered property. In May 2020, the organization announced that two programs, Athena II and Pandora IV, had successfully recovered 19,000 artifacts from 103 countries by fall 2019.

“The hundreds of arrests and investigations launched – and the thousands of items seized – should be a wake-up call to members of government and the art world,” said Deborah Lehr, founder of the non-profit organization Antiquities Coalition, Artnet NewsTaylor Dafoe reported at the time. “It’s a critical reminder, coming at an equally critical time, that when it comes to antique art, buyers should beware.”