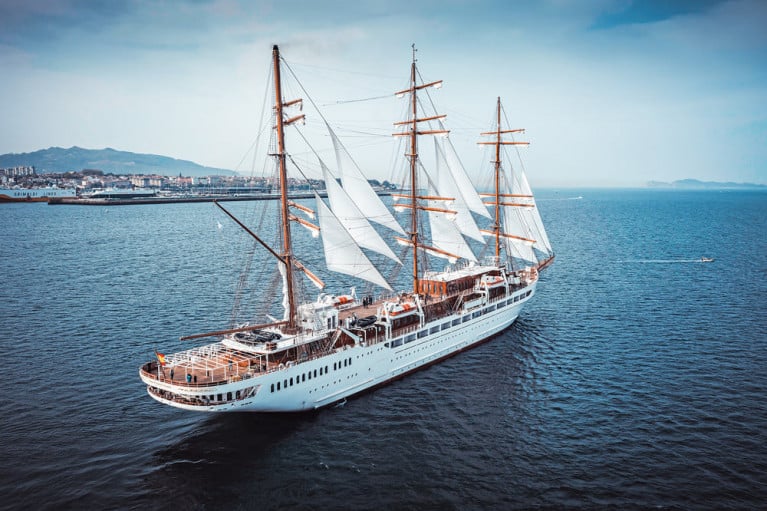 Next month, a new full-rigged three-masted Sea Cloud Spirit will be christened in the port of Palma de Mallorca by Infanta Elena of Spain, sister of King Felipe VI.

Sea Cloud Spirit is the modern interpretation of the Sea Cloud vessel, the flagship of Sea Cloud Cruises. Like the 90 year old original and the 2001 built Sea Cloud II (see ‘photo’ of Cork Harbor), the new tall ship has the character of a private yacht.

Immediately after the first contact with Sea Cloud Cruises, and aware of what the construction of the Sea Cloud Spirit meant for Spanish navigation and its uniqueness, Doña Elena agreed to name the new tall ship.

For the baptism ceremony on September 3, a bottle of champagne will, according to maritime tradition, be used to smash against the hull. The champagne, with which the godmother will baptize the Spirit of the Sea Clouds, was blessed after a pilgrimage of nearly 120 km to Saint-Jacques-de-Compostelle.

The Spanish shipping lawyer and legal representative of Sea Cloud Cruises, Javier Arias-Camison, has kept a promise he made at the start of the ship’s construction. After the successful and happy completion of the extraordinary tall ship, he personally brought the champagne on foot for the baptism in Santiago de Compostela and had it blessed there.

With two bottles of champagne in her backpack, Arias-Camison carried the luggage of a normal pilgrim on her back twice during the five-day pilgrimage.

During his tour, the lawyer did not let himself be stopped, even by painful blisters on his feet. At each stage of the pilgrimage, the bottles received the obligatory stamp of fervent walkers, on the specially made label of the champagne bottles.

As mentioned, one of the two bottles will traditionally be broken on the hull of the Sea Cloud Spirit during the baptism. The other bottle will be auctioned off for charity on the maiden voyage from Rome, Italy on September 14 and will include stops in Livorno, Portoferraio, Sardinia, Sicily, Salerno and Naples.

Sea Cloud Spirit will accommodate a maximum of 136 guests on board, and will have 85 crew members. Like the teammates of the new construction, the Sea Cloud Spirit is traditionally sailed by hand and follows the principles of soft tourism.

US, Spain agree to use military bases in Spain for Afghan refugees