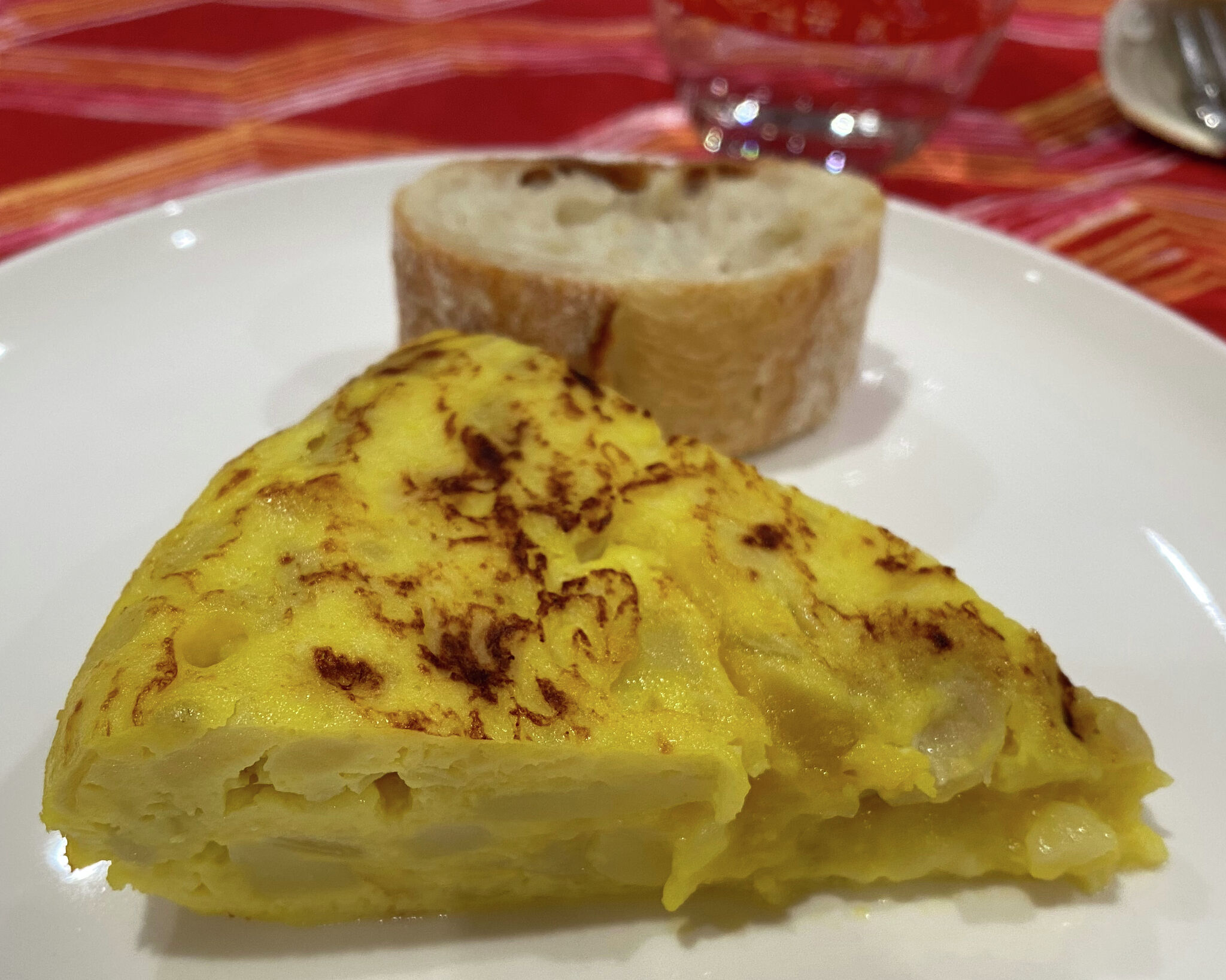 On some nights, you’ll spot a low blackboard leaning against the brownstone wall of 49 Dove St. in Albany, about a block from the Dove & Deer restaurant. On it, the mention “La Centralita” and an arrow direct you under a stone staircase to the entrance of an apartment on the ground floor.

You also have to stoop to enter through the door, which opens into La Centralita’s glossy red-and-white-tile remodeled kitchen, a culinary studio and tasting room hosted by the building’s married owners. Marcela Garces, a professor of Spanish and film studies at Siena College, originally from Michigan, and Yuri Morejon, a political scientist from Spain’s Basque region, met and married in Spain before moving to Albany. Today, their shared love for Basque cuisine has found its place in the heart of Center Square.

Waiting for my guests on the street, I watch the others hover timidly towards the sign, turn and dive out of sight. This is a ticketed event with a 5pm start and all nine of us arrive on time. Once inside, I linger past a cabinet filled with imported Basque foods, from olive oil to pickled beans; above, a brass notice board bears a menu and a worn passport belonging to Morejon’s grandmother. As we move from the kitchen to a back dining room, each wall is hung with their collection of vintage telephones – some branded Telefonica, Spain’s national telephone company – from which La Centralita, or switchboard, takes its name.

The idea of ​​a central switchboard, the physical room where operators would connect callers, resonates with Garves and Morejon whose downtown home was built in 1876, the same year the telephone was invented. But it’s more than that. At its core, La Centralita is about providing a communal space to teach and share their culinary connection to home.

The Basque Country, where northern Spain borders France on the Bay of Biscay, is famous for txokos, shared kitchens outside the home. These are small food societies where people from all walks of community life come together weekly to cook and share wine and meals. Anyone who has ever traveled knows that food is more than just food. It’s culture and connection. You could be invited into homes, break bread with new friends, taste regional or small-town specialties, stir pots alongside grandmothers, learn about customs and how visitors are greeted. But in the Basque region, social cooking groups are woven into the fabric of life.

In 2017, Morejon and Garces produced a 54-minute documentary, “The Txoko Experience: The Secret Culinary Space of the Basques”, which was shown on board Iberia Airlines, toured numerous film festivals in the States United and is the focus of tonight’s event. As we are greeted with a glass of Basque fermented apple cider and settle down to watch the film, we are offered a traditional spread: an Olivier potato and vegetable salad in mayonnaise, like the original Russian, only with tuna and roasted basque red pepper. With it, Spanish olives and imported Basque fries.

The film is a winding adventure from small-town txokos to the heralded, Michelin-starred cuisines of Arzak and Nerua inside the Guggenheim Bilbao. After a long winter of COVID isolation, it’s an invigorating odyssey. We see Basque culture standing out from the rest of Spain, with its own language and an informed, food-centric identity. The culinary space of txoko is steeped in history and a rich agricultural tradition nurtured by access to land and sea, including three txakoli wine appellations swept by the sea air, and the valley where one collects salt from natural evaporation from prehistoric springs. In town, Basque bars are opening with platters of hand-held pintxos (the Basque version of tapas), toppings pinned with toothpicks on crusty bread (“pintxo” means tip) to eat and pay for in a system of ‘honor. Bread is as important as water, and loaves are served at every meal, to be torn up and garnished with olives and anchovies or used to mop up sauce from plates.

Appetites whetted by the film, we are served pintxos cooked by Morejon in the adjoining kitchen. Garces, in her natural role as a teacher, shares anecdotes like “la Gilda”, an anchovy-pepper-olive pintxo named after Rita Hayworth’s lead role in the 1946 film. Successively, we eat tortillas de patatas thick with tightly layered potato slices held together by barely-cooked eggs, and two types of crispy breaded croquetas – dubbed “the perfect pintxo” – with an orb filled with blue cheese and caramelized onion, the l’ another more oval in shape and its salty béchamel center with diced ham. At the same time, we taste two txakoli wines, both tangy and barely effervescent, but a more stony one, with a tonic nod to its life on the Atlantic coast. Finally, a piece of Basque cheesecake, a pandemic social media star, that stands upright and fluffy with no crust, just “burnt” edges gently toasted in the heat of the oven against a toque of parchment paper.

For two hours, we took a food tour, shared thoughts on flavors and colors from our own travels, and swapped names. We learned that canned sardines, usually on supermarket shelves in the United States, are only half-canned. Salt curing continues in intensity in the tin unless it is stored in the refrigerator to slow the process and keep the flavor mild.

With full-time careers, Garces and Morejon limit the frequency of their events and vary the offerings each time, but you can request small-group tastings, join a Basque cheesecake cooking class, or order the tortilla de patatas de Morejon to take away. Your best bet is to register for La Centralita events and book your tickets quickly, as they are limited to 10 seats and sell out quickly. But if you see the blackboard in front, it’s a comforting sign, knowing that La Centralita has a direct connection to Euskal Herria, the Basque name for the region they inhabit.