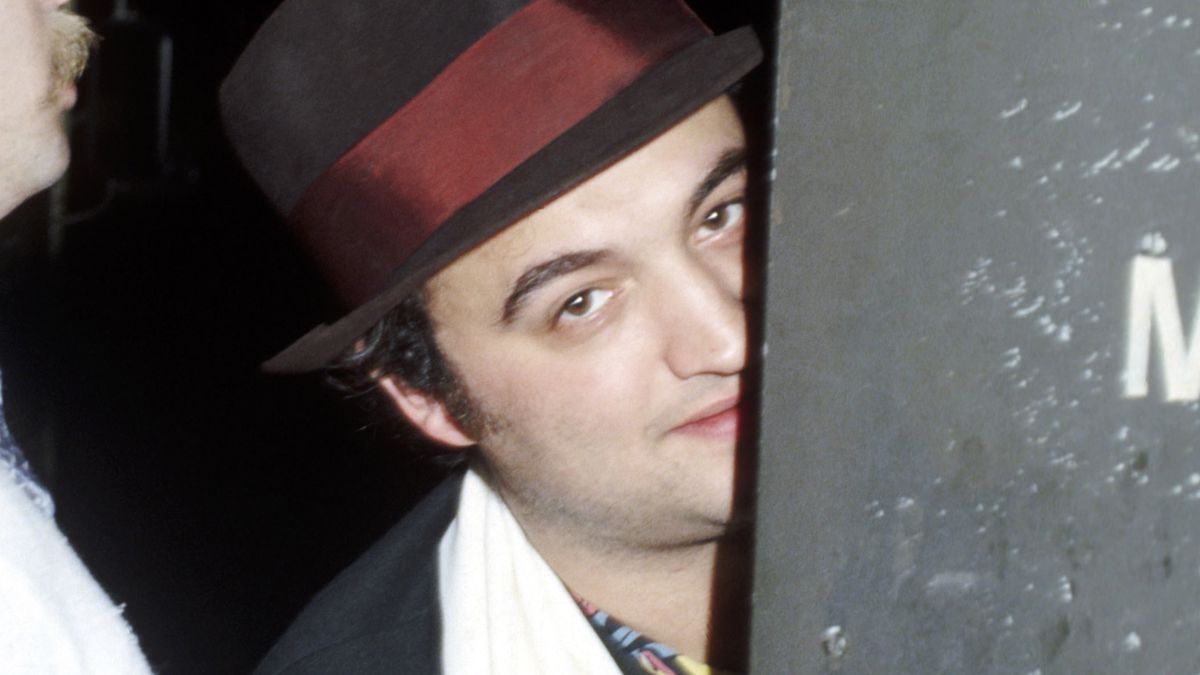 John Belushi: the overdose that marked an end and a beginning in Hollywood | Culture

In Hollywood, the 1970s are said to have ended on March 5, 1982, the day John Belushi died of a cocaine and heroin overdose. “The game was over,” recalls Taxi Driver director Paul Schrader. “Some people stopped right away; the feeling was that the rules had changed. The comedian and actor Bob Woodward’s 1984 biography, Wired: The Short Life and Fast Times of John Belushi, was recently reprinted in Spain, in which the journalist who uncovered the Watergate scandal not only paints a portrait of a man unable to control his demons and his urges, but from a culture, that of Hollywood in the 1970s, which tolerated, facilitated and celebrated the unrestrained consumption of drugs.

It’s hard to overstate Belushi’s impact on American culture, but it’s also hard to understand him outside of his time. At a time of mistrust vis-à-vis institutions and crisis of values, after the fall of Nixon and the incapacity of Jimmy Carter, the United States found in Belushi a vehicle of their catharsis. His humor was unpredictable, anarchic, uncomfortable, anti-system, surreal and impulsive. “He adapted the counterculture to comedy,” says Toni García Ramón, author of the Spanish reissue of Wired’s prologue. “He was one of the first to pull jokes out of his sleeve, to improvise everything. He came from that dark, dirty, punk New York that Giuliani would later take on. Belushi was pure counterculture, he never bowed to anyone. He would walk into any sketch and blow it up. His greatest discovery was bringing street humor to television, making the general public laugh at the crude jokes people told in Hell’s Kitchen bars filled with transvestites, punks and prostitutes.

Saturday Night Live was the first show created by and for this generation born at the same time as television. Belushi has used the platform to do things no one thought they could do on TV: he shoved cigars up his nose, smashed beer cans on his forehead, stuffed his mouth with food and spat it out. Through comedy, he dissects human behavior and parodies a masculinity which, in the midst of the second feminist wave, has become childish, primitive and explosive. His style of humor was so imitated that it quickly lost its impact, but in 1975 he made 26-year-old Belushi a national idol. “He represented all the messy bedrooms in America,” said Steven Spielberg, who led Belushi in 1941.

Belushi developed her ability to dissect American culture during adolescence. “He was a great observer,” says García Ramón. “He comes from an immigrant family that never integrated and knew little about the United States. He spent the afternoons with his classmates. He had to completely reinvent himself. And that’s one of the things that made him stand out as a comedian. He was the only person who could do it because he had invented it.

In 1978, Belushi had the most-watched show on television, a number one record with the Blues Brothers, the duo he formed with Dan Aykroyd, to warm up Saturday Night Live audiences before filming, and the highest-grossing comedy in history. at the time, National Lampoon’s Animal House.

“John was literally hailing police cars like taxis. The cops were like, “Hey, Belushi! Then we would fall into the backseat and the cops would take us home. ,” writer and producer Mitch Glazer told Vanity Fair. For the first time in history, young people were in charge. The United States had become one big college campus and Belushi was the demented dean of it. Comedian Nick Helm told the Guardian that in the 1970s comedians were the kings of New York. “He presented [the idea of] funny people not just like rock stars but gods. And I think the fun may have come after the lifestyle. It’s hard to watch these SNL skits and not smell of alcohol and drugs. They just smell like excess. In one of Belushi’s most popular sketches, he pretends to be Beethoven and after sniffing a white powder, he transforms into Ray Charles. What he snorted, live in front of 17 million viewers, was real cocaine. Belushi called it “Hitler’s drug” for the power it made him feel. He was convinced that his best imitations, from Henry Kissinger to Joe Cocker, were due to cocaine. “The truth is, a lot of people on the show thought you couldn’t do a ninety-minute live comedy show week in and week out without taking cocaine,” the SNL writer said (and future US senator) Al Franken to People.

The budget of the film The Blues Brothers included cocaine, for night scenes. “Everybody did it, including me,” Aykroyd told Vanity Fair. “[But] John, he loved how it felt. It kind of brought it back to life at night – that feeling of superpower where you start talking and conversing and thinking you can solve all the problems in the world. In the Belushi documentary, there are letters the comedian wrote to his wife, promising that he would quit drugs after the next film. Belushi ended up spending $2,500 a week on cocaine. The more he earned, the more he took. And if he had no money, it was given to him as a gift.

“I swear you would walk down the street with him and people would give him drugs. And then he did them all — be the kind of character he played in sketches or in Animal House,” director Penny Marshall told Vanity Fair.

Some of the stories Woodward tells in his biography are as sad as they are terrifying. One night he arrived on the SNL set in such bad shape that the producer, Lorne Michaels, called a doctor, who said that if Belushi performed, he might die. “What is the probability? Michaels asked. Fifty-fifty was the answer. “I can live with that.” John Landis, who directed The Blues Brothers, found Belushi half-conscious, drenched in urine and next to a pile of cocaine. “John, you’re killing yourself!” It is not financially viable. You can’t do that to my movie! His wife, Judy, wrote to Belushi’s dealer. “I understand it’s your job, but please stop selling him cocaine.”

As Belushi had been banned from all bars in New York, he opened his own in an abandoned building on Hudson Street. Among its regulars were David Bowie, Keith Richards and ZZ Top. “It was tiny, it smelled bad, and the bathrooms were filthy…it became New York’s hottest party,” Glazer recalled in the documentary.

Belushi spent the first week of March 1982 at Chateau Marmont’s Bungalow 3 on Sunset Boulevard, trying to rewrite the script for Noble Rot, a romantic comedy that he hoped would help him mature as an actor. Paramount instead offered to film The Joy of Sex, a comedy that required Belushi to wear diapers. The failures of 1941 Continental Divide and Neighbors had made him feel like a Hollywood pariah. Belushi, though anti-system, carried positive reviews in his jacket pocket.

Bungalow 3 has become a 24 hour party. To be able to sleep, Belushi had to rent a room in a nearby hotel. On March 5, Robin Williams came by to say hello and Robert de Niro stopped by for a few drinks, but he didn’t stay long as he was uncomfortable in the mess, with bottles, overfilled ashtrays and leftover food everywhere, and because he didn’t like, in his own description, the “tawdry woman” accompanying Belushi.

That woman was Cathy Smith, a groupie who had lived in the Rolling Stones mansion for a few years and was then doing errands for rock stars. Smith had taken up residence with Belushi at Chateau Marmont with the task of injecting him with speedballs, a mixture of cocaine and heroin, as he disliked needles. At dawn the next day, Smith brought her a glass of water to bed and he told her he was fine but asked her not to leave him alone. But she had errands to run. When he returned, the hotel was surrounded by police, reporters and onlookers: At noon, personal trainer Bill Wallace, who was helping Belushi lose weight, found him dead in bed, naked and in a fetal position. . He was 33 years old.

That morning, Hollywood woke up from a party that seemed to never end but had suddenly stopped being fun. “Before that day, nobody thought you could die from it,” Franken said. Belushi has become a fable, with cautionary tale included, about Hollywood’s moral corruption and the suffering of its stars. Woodward’s book definitively inscribes the myth in the folklore of the city: “He made us laugh”, sums up the journalist. “Now he makes us think.”

Belushi’s funeral photographs capture a generation of comedy stars in shock. Cathy Smith gave an interview to the sensationalist tabloid National Enquirer whose headline, I Killed John Belushi, prompted the reopening of the investigation into his death. Smith was sentenced to 15 months in prison for manslaughter. She died in 2020, aged 73. The New York Times published an obituary describing her as “one of pop culture’s most notorious footnotes”.

Chateau Marmont, which had always been a low-key haven for stars, entered Hollywood’s dark chronicle after Belushi’s death. Over time, coaches carrying tourists added it to the list of mandatory stops. Bungalow 3 has become a place of worship, worship and pilgrimage. New York artist Jean-Michel Basquiat always stayed at Bungalow 3 during his trips to Los Angeles (he died in 1998 of a heroin overdose). In the late 1980s, writer Jay McInerney traveled to Hollywood to work on the film adaptation of his 1988 novel Bright Lights, Big City, which starred Michael J. Fox and Kiefer Sutherland. As he got out of his taxi, the film’s producer told McInerney that he had a room reserved for him at the Chateau Marmont. “Is he good?” asked the writer. “Is he good?” the producer responded. “John Belushi died here!”

Did you hear our Spanish news podcast That? Every week we try to explain the curious, under-reported and sometimes simply bizarre news that often makes the headlines in Spain.