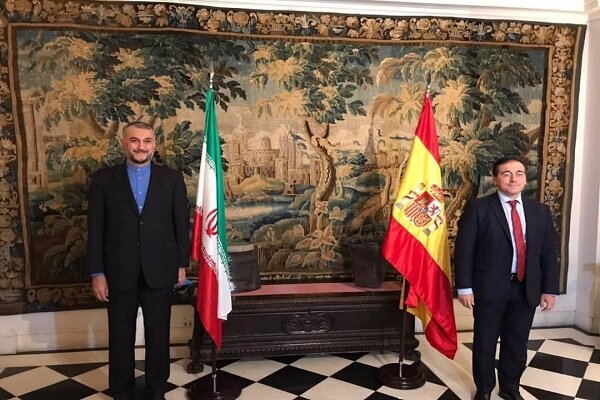 Iranian Foreign Minister Hossein Amir-Abdollahian, who is in New York to attend the 76th meeting of the UNGA, met his Spanish counterpart JosÃ© Manuel Albares on Wednesday.

During the meeting, the Iranian Foreign Minister highlighted the 400-year history of Iran-Spain relations and stressed the need for serious efforts to improve relations and said that relations in the political, economic and parliament were moving in the right direction, but new projects in the field should be defined in the fields of health, industry and science and technology, culture and tourism, bartering of goods, business activities private, etc.

Amir-Abdollahian hailed cooperation in the fields of health and medicine at the height of the coronavirus pandemic as an unforgettable point in the cooperation between the two countries.

He also highlighted the banking and money transfer issues facing Iranian students in the European country and called on the Spanish counterpart to help resolve the issue through mutual cooperation.

Emphasizing Tehran’s desire to define a balanced relationship with Europe, Amir-Aboullahian said that “Europe’s relations with Iran should not depend on the non-constructive behavior and attitude of the United States towards Iran “.

Stressing the need for serious efforts to improve relations, the senior Iranian diplomat said: â€œAccording to the foreign policy of the new government in Iran, the expansion of relations with Europe includes all the countries of the Green Continent as a priority and these links are not limited. to the Troika (three major European countries). “

Mr. Albares highlighted the downward trend in trade relations between Iran and Spain since 2018 (exit from the US JCPOA) and stressed the need to change the situation through mutual efforts.

The senior Spanish diplomat also exchanged views on developments in Afghanistan, saying the European country is ready to help with the vaccination of Afghan refugees in Iran.

Referring to the humanitarian situation in Afghanistan, the two ministers stressed the need for the international community to pay serious attention to the issue and draw red lines.

A Parisian house that breaks with tradition