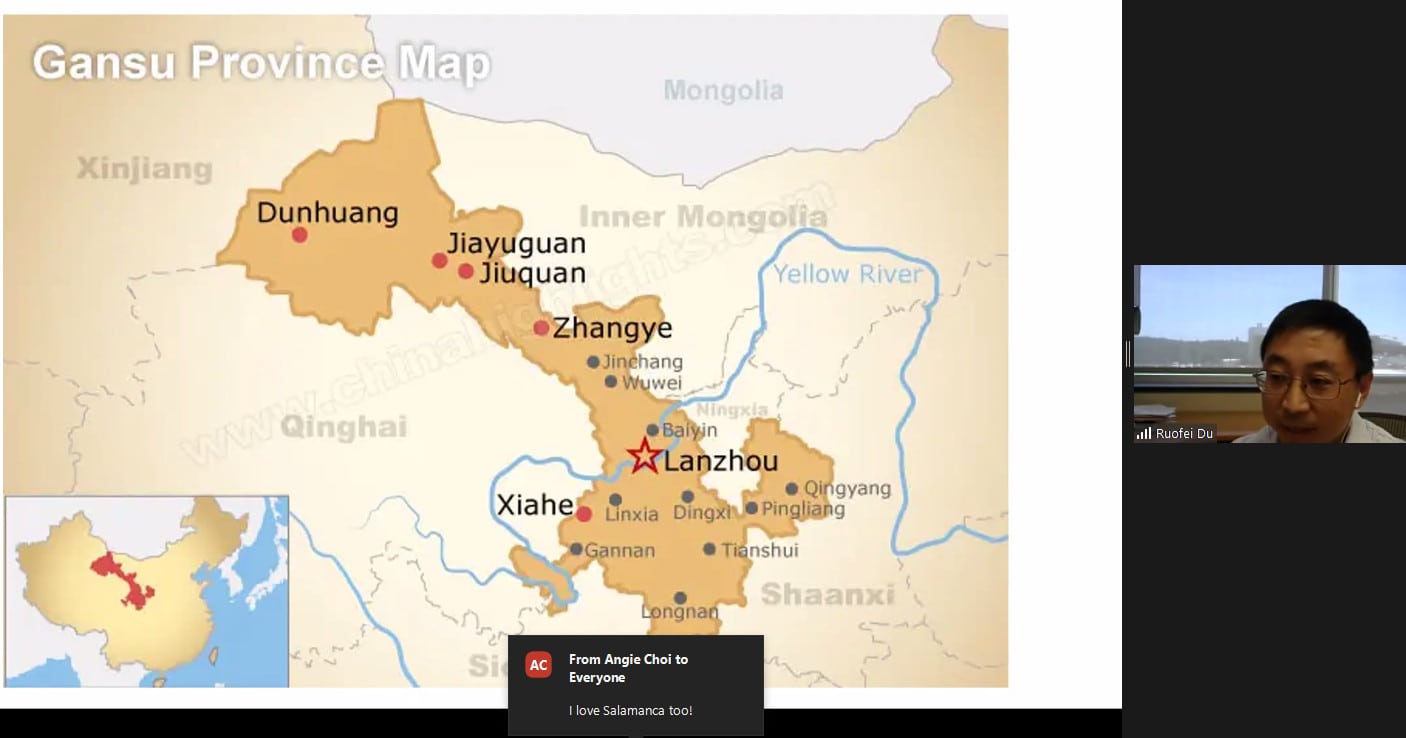 Ruofei Du, Ph.D., shows viewers a map of Gansu Province, where he grew up.

October 6, 2021 | Students and staff at the University of Arkansas for Medical Sciences (UAMS) were transported across the world one week and in the throes of a UAMS quiz contest the next as they virtually entered at lunchtime events in late September to cap UAMS’s Diversity and Inclusion Month celebrations.

On September 24, those who joined the International Fest via a Zoom presentation hosted by the Division of Diversity, Equity and Inclusion at UAMS (DDEI) were greeted with a video preview of diverse cultures as colorful graphics and music have taken them across the world. As viewers were driven across continents, the names of countries sprang from the map, creating a living geography lesson as well.

Next, a panel of employees representing three of the roughly 90 countries that make up UAMS’s student and employee population, shared abridged versions of their life stories, including how they came to work at UAMS, highlighting thus the unique aspects of Vietnamese, Korean and Chinese Culture.

Odette Woods, who is DDEI’s senior director of staff diversity, equity and inclusion, moderated the virtual event, which she said was designed to engage employees during a second year in which popular in-person festivities have been suspended due to the ongoing coronavirus pandemic. She said she looked forward to returning to the live event next year, where employees representing diverse cultures, many in local costume, set up booths in the downstairs lobby. the UAMS Education II building featuring cultural exhibits, cooking samples and demonstrations of Indigenous music and dance. This year, members of the campus community were invited to explore the world through a special DDEI International Fest webpage that included videos, games and articles.

Toan Bui, a specialist in nursing clinical informatics curriculum development and clinical education department, led the panel of presenters during the virtual festival. He said he and his family arrived in the United States in 1993 from Vietnam through Operation Humanitarian, a State Department resettlement program for former Vietnamese political prisoners and their dependents.

After struggling to survive in the forests and jungles of Vietnam, Bui’s father was captured and imprisoned in 1975. He was released in 1982 and was finally accepted into the resettlement program in 1992.

Bui said the family first landed in Houston, Texas. After going through a long process and moving to Arkansas, they were granted US citizenship in 2002.

He married in Arkansas in 2004, the same year he received his bachelor’s degree, which he followed in 2009 with his master’s degree in education, both from the University of Arkansas at Little Rock. Since he started working at UAMS 20 years ago, he said: “UAMS has become my second family. “

Among the Vietnamese mores he shared, trust is a long process, academics are revered and elders are respected.

Next up was Angie Choi, Ed.D., Assistant Professor at UAMS College of Pharmacy, who was raised in America by her Korean parents.

Choi said her parents immigrated to the United States in 1971, when she was 3, after an aunt married a U.S. citizen and sponsored her family. She said her parents were eager to come to America after the lack of economic opportunities in South Korea after the Korean War, as she demonstrated by displaying a 1960s photograph of a desolate commercial area in the now bustling capital of Seoul.

Choi said her parents moved the family to Arkansas in 1977 and that she attended McClellan High School, where, she recalls, “I was the only Asian in my school.” At that time, there weren’t a lot of Asians in Arkansas and “I suffered a lot of discrimination,” she said.

Things got better when she attended Wellesley College, a private liberal arts college for women in Wellesley, Mass., And “for the first time in my life I was surrounded by Asians of all stripes. cultures. It was a profound experience. “

She studied abroad in Spain for a year, then moved to San Francisco, where she was again surrounded by Asian culture. She lived in California for 20 years, and during that time she said, “I have become deeply spiritual” and have traveled to India often. She shared a photo of herself standing next to her spiritual advisor in the Himalayan foothills.

In 2008, Choi said, she returned to Arkansas to help her elderly parents and began working at UAMS in 2009 at the College of Public Health. By this time, the Arkansans had become more tolerant of Koreans, she said, referring to the current “explosion of Korean culture” and the “Korean wave” of pop music in America.

Viewers then heard from a third panelist, Ruofei Du, Ph.D., who has been an assistant professor in the Department of Biostatistics at UAMS since last year.

Du, who arrived in the United States at the age of 30, showed viewers a map of Gansu province in north-central China, where he grew up. He shared several photographs of Gansu, highlighting paintings inside caves and colorful rocks in the Gobi Desert, noting, “I see a lot of similarities between Gansu and the state of New Mexico.”

Du shared other photos, including those of a traditional Chinese New Year parade where participants dressed in colorful clothing walked on stilts. He discussed the importance of noodles – his favorite dish, which his father recently taught him about the elaborate process of authentic making.

A misconception that many Americans have about China is that pandas live all over the country, he said. But in reality, they only live in a few places in the country, and “my hometown, Longnan, is not far from the panda hometown.”

To complement UAMS Diversity and Inclusion Month, a virtual version of UAMS Jeopardy! September 30 to test participants’ knowledge of past and present diversity-related topics focused on UAMS and Arkansas. The event was co-sponsored by DDEI and the UAMS Library.

During the process, participants learned (or in some cases remembered) that UAMS was founded in 1879, has 535 beds, its employees represent 73 of the 75 counties in Arkansas and other historical facts such as Mollie King, professor of pathology, became the first female full-time faculty member at UAMS in 1917.

Why an Ontario town moved to a four-day work week