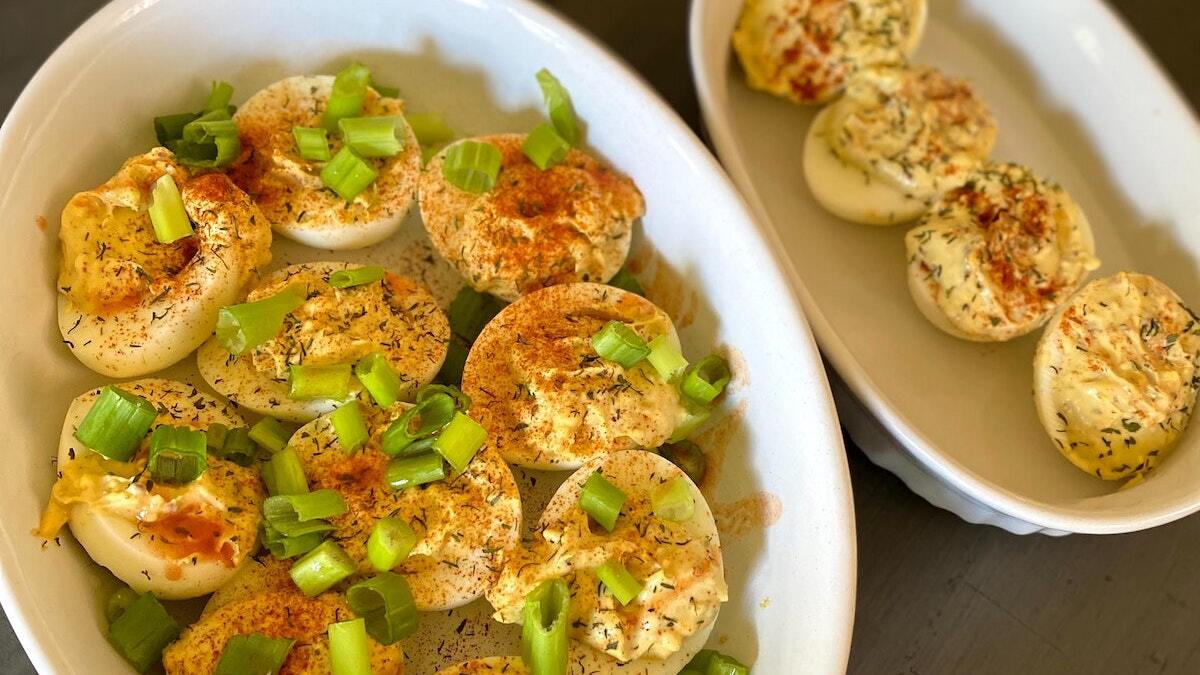 In the shadow of the Drake Elm

The art of stuffing an egg was not lost with the fall of the Roman Empire. | Unsplash/Tahirah Walker

During a family picnic in the Montgomery neighborhood on a sunny August afternoon, the backyard of the house was filled with people. Friends and family would settle under the biggest Drake Elm tree in the neighborhood. It was the pride and centerpiece of the sprawling yard, meticulously maintained by the home’s owner, Jeremiah Clemens’ sister and Samuel Clemens’ second cousin, aka Mark Twain.

When Miss Clemens’ guests arrived, they came with gifts of various foods from their family recipes. Miss Clemens had one of her own to offer that afternoon. He would have been the one to win a first place ribbon, if offered one. First place of curiosity and taste created by a woman who spent her days in the kitchen and her nights with her nose in a book. Usually a cookbook. Miss Clemens casually put her plate on the table under the tree and joined the crowd. No one paid much attention to it at first, until later when she lifted the napkin covering her plate and unveiled a presentation of eggs deviled with a creamy white pastry. When asked what she had done, she simply replied: “Deviled egg”.

They were unlike any other egg dish anyone at the meeting had seen before, but they looked delicious. Miss Clemens had found a recipe in “The Boston Cooking-School Cook Book” by Fannie Farmer, in which she called for an ingredient called mayonnaise. It was 1896, and deviled eggs in Alabama, and the rest of the country, were never going to be the same again.

Although Miss Clemens was not the originator of the mayonnaise recipe, she received the honor that afternoon in the shadow of the Drake Elm. This brings us to the beginning. Alabama, Boston or any other part of America is not where the deviled egg started. In fact, it was in ancient Rome and the Roman Empire that the idea of ​​using eggs like this began. It was common practice for wealthy Romans to serve it to their guests at gatherings, festivals, and other social events. Of course, we cannot see those wealthy and arrogant Roman aristocrats boiling and peeling the eggs to prepare them for devilry, so the practice was probably developed and perfected by the cooks or slaves of their Roman nobles.

Over time, the art of stuffing an egg was not lost with the fall of the Roman Empire. In medieval Europe, the tradition of “ab ova usque ad mala” (From the beginning to the end of the meal) was perpetuated by the lords and ladies of the many kingdoms and kingdoms from France to Germany, including Europe. ‘England. A variant of the starter food had even been discovered by an archaeologist digging up remnants of the past in the Andalusian region of Spain. It seems that the common people of this region once enjoyed the delicacy once considered reserved for the wealthy in the 13th century.

Each country added its own variety to the process to enhance its flavor, and perhaps even to mask the bland taste of a boiled egg. So by the time the dish reached Montgomery, Alabama, in the hands of Miss Clemens, it had been around the world and more. But it was that Alabama afternoon that made Deviled Eggs so famous, and an indispensable and never-forgotten staple for American picnics, backyard barbecues, days at or around the beach. campfire in the mountains. Deviled eggs are as much a part of Americana as apple pie, pumpkin jack-o’-lantern, Easter bunny and the American flag. Hardly any gathering in this country can take place without someone bringing in a tray of these delicious, succulent, cleverly disguised, overfilled, torn to pieces boiled eggs. They are almost as irreplaceable as potato salad.

Interestingly, however, not everyone was in love with deviled eggs. It’s all in a name as they say. When these little treats became popular and considered the thing to have at parties, second only to the ice cream, religious gatherings asked their attendees not to bring “devil” eggs to a potluck. However, when people said they wouldn’t attend unless the egg dish was allowed, organizers came up with a clever solution. Some did not see it as clever, but as deceitful, nevertheless, they attended church meetings that featured “deviled eggs, salad, or dressed eggs.” As long as the devil was not involved in the process, the churches in the southern and mid-western regions of the country were kosher with it. We won’t tell anyone, that’s all.

So now that everyone in the country is okay with these eggs prepared in such a unique way, it turns out to have its origins in a hedonistic and perverted society, and has been perpetuated throughout history by crusaders, inquisitors and like-minded old folks. lady grandmothers sipping mint juleps, to finally find a seat at the table of Mark Twain’s second cousin’s sister in Montgomery, Alabama, we can breathe easy and savor that next bite of deviled eggs .