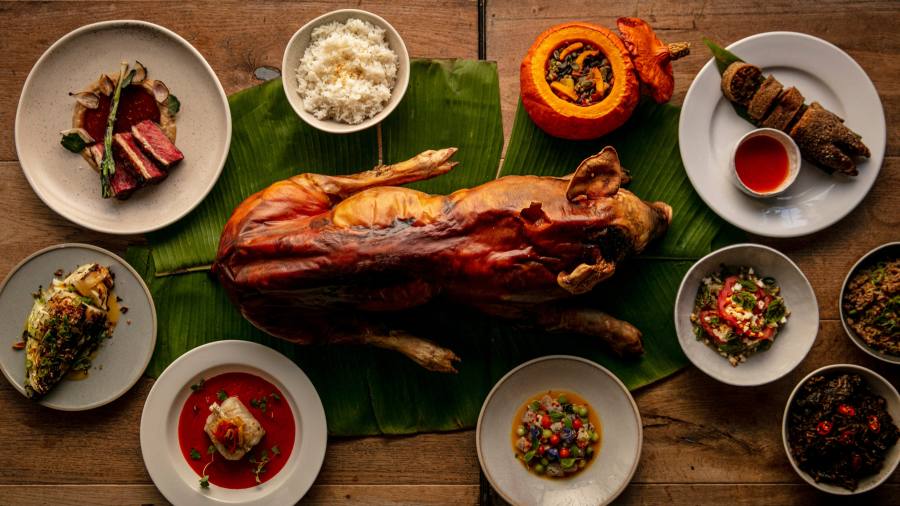 “Size matters a lot here,” says Ferdinand “Budgie” Montoya, chef and founder of Filipino bistro Sarap in London’s Mayfair. We are studying the 5 kg carcass of a suckling pig, which is compact enough to fit in a medium-sized baking sheet. Bigger, frankly, and it wouldn’t fit in the oven. Montoya, who was born in the Philippines and raised in Sydney before moving to London in 2012, prepares the classic Filipino dish lechon (or roast piglet), often the centerpiece of family celebrations. Although small, this piglet will feed up to eight.

One of the most popular lechon recipes, originating in the province of Cebu, consists of stuffing the pig with aromatics (garlic, spring onion, lemongrass) and cooking the animal over charcoal. Montoya prepares a high-end version, using a piglet sourced from Segovia in central Spain. Compared to an adult pig, the meat is softer and much more tender because it is milk-fed.

After the pig’s innards are removed, Montoya begins by cutting out the rib cage and backbone. He then sprinkles the inside with cane vinegar, soy sauce, powdered salt, pepper, garlic and ginger (“like a rub to flavor the flesh”) before inserting a row of four stalks of bruised lemongrass and red peppers. Contrary to tradition, he stuffs the piglet with adobo rice, which has been cooked in a broth made with braising juices from pig’s trotters and pork knuckle among other ingredients, then mixed with garlic, onions new and cilantro. After tying up the pig, he rubs its skin with cane vinegar, seasons it with salt and slides the animal into the oven to bake at 160°C for three hours. “If you turn the temperature up at the end, the skin swells,” he says of the thick, crunchy crackles most Westerners expect. “By keeping the temperature low, you get incredibly succulent flesh and a crisp, glass-like skin, what we call crackling.”

Roasted suckling pig is present in many cultures. Around Portugal and the Basque country, the tradition is to season it with salt and pepper and cook without stuffing, slowly roasting the animal until it is so tender that the meat can be cut. on the plate. In Sweden, spädgris is stuffed with fruits like apples and plums. In Germany, spanferkel is marinated in a garlic, paprika and mustard glaze. Wherever you find it, the dish evokes the sense of occasion and togetherness that comes from gathering around a whole animal.

The meat is soft, juicy and porcine, with crackers as thin and flaky as filo

Restaurant owners have put it on their menu precisely for this reason. A few doors down from Sarap, you can find an excellent version at the Spanish restaurant Sabor, where suckling pig is cooked in a wood-fired oven and served with warm potatoes and a green salad. At nearby Bocca di Lupo, the “maialino” is roasted on a bed of carrots and fennel, with Bologna potatoes and onions added later, then perhaps grapes or braised chestnuts when deglazing. pan. Further afield, St John’s offers a larger version (“more teenage than suckling at around 14kg”, says chef director Jonathan Woolway), where the pig is stuffed with onions cooked “in a hearty red wine” and rolled with bread, sage and garlic. .

“Decadence” is the word Jacob Kenedy of Bocca di Lupo uses to describe the dish. The “theatricality” is that of Woolway. For Montoya, it’s a “showstopper” and a “conversation starter” that “sells out” when every diner in the restaurant turns to watch the pig come out. “The majority of customers ordering it now are those who have eaten here before, seen the dish, and returned with friends,” he says.

The plating is a performance in itself. After three hours in the oven, the pig is taken to the cutting block and cut open to customers with a cleaver. The rice is tossed with truffle paste with extra shavings on top, then served with meat packets, a soy-vinegar dip (or sawsawan) and a pickle of carrot, kohlrabi and green papaya, including the bittersweet and spicy side cuts through the fatty richness of the flesh. The meat is soft, juicy and porcine, with crackers as thin and flaky as filo. I can’t help accumulating seconds, then thirds.

As a child, Montoya looked forward to special occasions precisely for the holidays: “If a birthday or a baptism came around, I knew there would be lechon and I couldn’t wait.” Now he hopes to engender the same taste in his customers. “I want people to plan their visits, mark days on the calendar and arrive prepared,” he says. His suckling pig is worthy of the biggest appetites.

The most common consumer frauds and how to avoid them