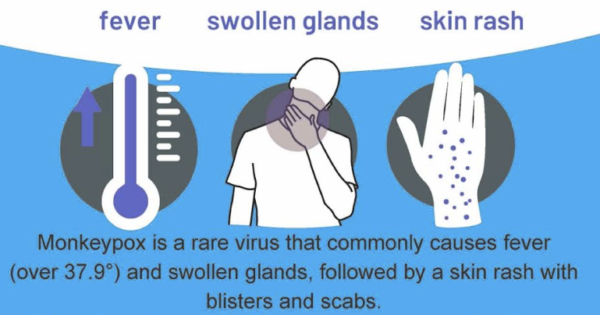 The Strategic Coordination Group met on Tuesday to discuss Gibraltar’s state of preparedness in the event that a case of Monkeypox is confirmed in Gibraltar.

As of Tuesday, some 179 cases of monkeypox had been confirmed in the UK and that number is expected to rise.

Cases have also been detected in Spain, notably in the province of Cadiz, but not in the Campo.

Monkeypox is linked to smallpox and cases are usually found in West and Central Africa, with the virus not often spreading elsewhere.

That’s why outbreaks reported in more than a dozen countries, including the UK, Portugal, Spain and the US, have alarmed public health experts.

The disease, which was first discovered in monkeys, is usually mild but can lead to serious illness in some cases.

Director of Public Health Dr Helen Carter said monkeypox is a rare disease that usually causes fever (over 37.9 degrees) and swollen glands, followed by a rash with blisters and crusts.

“The illness is usually mild and most people recover in three to four weeks,” read a statement from No.6 Convent Place.

“However, for a minority of people the illness is more serious, so it is important that anyone with symptoms call 111 (or 200 72266 from a phone outside Gibraltar).”

“People should watch out for symptoms of fever, swollen glands and rashes with blisters and scabs.”

“The virus is transmitted from person to person through close contact with wounds, bodily fluids, respiratory droplets and contaminated materials (bedding).”

The meeting was convened and chaired by Minister of Civil Contingencies, Samantha Sacramento, No.6 Convent Place.

“Ministers were briefed on the procedures and protocols established by the GHA, which have been developed over several weeks and are ready to be implemented,” the statement said.

“The GHA is now undertaking enhanced surveillance, having educated its frontline physicians and tested its intake and case management systems.”

“The GHA is in a good state of readiness and continues to monitor the situation on a daily basis.”

The GHA takes this opportunity to remind the public of the importance of good hygiene practices, including hand washing, which prevent the transmission of many viruses and diseases, the government spokesperson added.