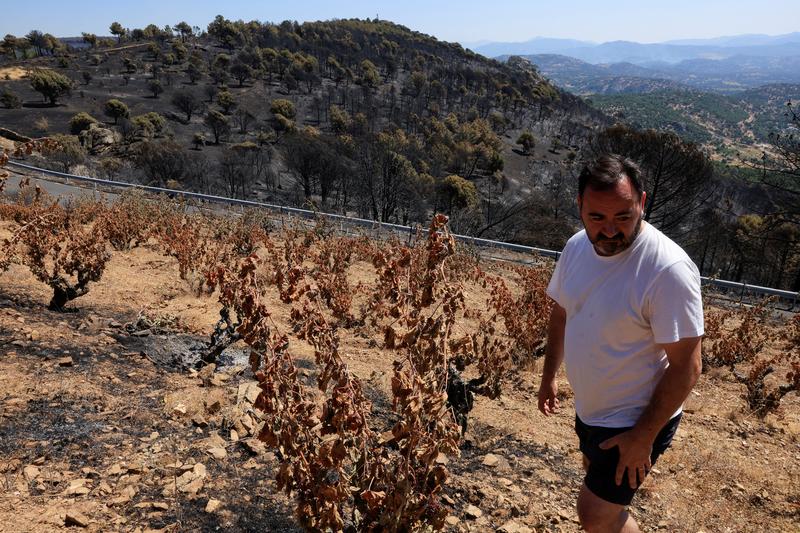 CEBREROS, Spain (Reuters) – When Spanish winemaker Jesus Soto returned to his land for the first time since a wildfire swept through the region, the sight of his charred vines left him in tears and feeling like if he had “lost a part of my soul”. “, he said Thursday.

With one of his vineyards – co-owned by ex-Spanish midfielder and ex-Manchester City ex-Manchester David Silva – engulfed in flames, wine label owner SotoManrique believes he will only manage half of his usual production of 3,000 bottles of “Alto de la Estrella”. ” This year.

Soto, with the help of his daughter Belen Soto Manrique, 24, has spent more than a decade buying and revitalizing small old vineyards near Cebreros in the central province of Avila, whose altitude of 700 at 1100 meters gives the wines their character. .

“A fire is always terrifying because it kills everything around it and the feeling is just awful. The feeling, the smoke, the smell… There’s a feeling of total destruction,” he told Reuters.

He must now decide how to reinvigorate the vineyard – covering just over one of its 20 acres – and reclaim its soil, and worries about the potential impact on the quality of the wines he may produce this year.

“Everything that happens for a year in nature ends up affecting the wine,” he said.

Firefighters continued Thursday to fight forest fires in several Spanish regions. Authorities said they were making progress but were grappling with complex conditions. In Cebreros, their efforts were hampered by shifting winds.

Scientists say the heatwaves that swept across Europe last week and sparked wildfires in the region are stark evidence of climate change.

Soto, 52, said the abandonment of Spain’s vast countryside by people moving to its cities was a more pressing issue than climate change.

“We always remember climate change when something happens, but right now here and in many parts of Spain the big problem is the neglect of the countryside,” Soto said.

Scientists say increasingly dense vegetation in the Mediterranean belt is further fueling the fires, while charities including the World Wide Fund for Nature and BirdLife met with the Spanish government on Thursday to call for a change in focus from from firefighting to prevention and forest management.

So far this year, 90,000 hectares have been burned across the country, including 20,000 hectares during last week’s heat wave – an area slightly larger than New York City. Spain is already experiencing the worst year for forest fires in a decade.