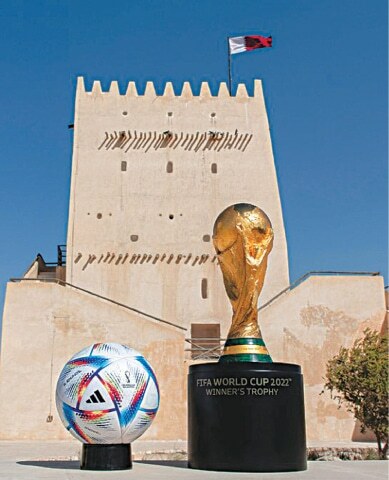 We have less than a month and a half before the whole world sets up camp in the Middle East, literally and figuratively. The anticipation builds, the passion and fervor of the fanatics begin to peak. The largest sports spectacle in the world in terms of audience returns for its 22nd edition. The FIFA World Cup is approaching.

Qatari authorities plan to welcome more than 1.5 million people during the months of November and December, more than half of the population of the small Arab state. Indeed, no less than 2.5 million tickets have already been sold. There is even significant Pakistani involvement, with the official ball, “Al Rihla”, made in Sialkot and a contingent of the Pakistani army delegated for the security of the tournament.

There is a raging debate over how the scheduled tournament in the middle of the league season would affect the quality of football being played. Recap: The 2022 World Cup is the first ever to be held in winter, to shield players from the soaring temperatures of the Qatari summer. But several former players, including David Beckham and Wayne Rooney, believe the football will be better thanks to players with pace and less burnout, even if they don’t get many opportunities to play for the national team.

Whether you’re an avid fan, seasonal fan or just fancy a particular player, it’s time to pick out your national team shirts, dust them off and get back in the saddle. Well, maybe I’m getting a little too excited and mixing up the metaphors; let’s jump into ‘Waka Waka’ and look forward to some scintillating action on November 20th.

The wait is almost over, as 32 nations prepare to battle it out for glory next month on the biggest stage of them all, the FIFA World Cup. Here is an overview…

As tradition dictates, the 32 teams were divided into eight groups of four.

The hosts were pitted in Group ‘A’ alongside the Netherlands, returning after missing the 2018 edition, Ecuador and African champions Senegal. Qatar have been dubbed the weakest host country ever, but it would be foolish to write them off, given they are the current Asian champions and especially after Russia brushed off similar predictions with their run. dream to the quarter-finals in 2018. However, the favorites to qualify in the group will be the Netherlands and Senegal.

Group ‘B’ includes the British duo of England and Wales, USA and Iran. While England will be heavy favorites to progress, Gareth Bale will be optimistic that his country’s first final appearance since 1958 can be extended to the knockout stages. The Iran-US matchup will be interesting, as the geopolitical rivals face off in a politically charged environment not too different from their encounter in 1998, when Iran prevailed.

In Group ‘C’, the great Lionel Messi has hinted that at 35 this may be the last time he performs on the biggest stage of them all. His native Argentina, with a new generation of players to help propel them to the only trophy that eludes them, are drawn with Mexico, Poland and Saudi Arabia. Mexico always seem to punch above their weight at major tournaments and Poland have 2021 Ballon d’Or winner Robert Lewandowski in their ranks. It’s a tough group, with Mexico v Argentina, one of the group stage matches, becoming the first sold-out game.

France, defending champions, return to defend their title in group “D” alongside Denmark, Tunisia and Australia. France are still blessed with the kind of team depth normally found in FIFA Manager mode, and are once again one of the favourites. Denmark have been impressive over the past two years and were the first European country to qualify for the tournament. The two European nations are expected to be too powerful for their African and Oceanian counterparts.

Group ‘E’ arguably includes the match of the group stages, in the form of Spain against Germany, the winners of the 2010 and 2014 World Cups. Japan and Costa Rica complete the line-up, both quite strong enough to cause surprise. A group too close to call. There’s also the tantalizing possibility of either Germany or Spain taking on Belgium in the round of 16.

2022 will likely be the last chance for Belgium’s golden generation to challenge for the world crown, but before that they will have to navigate an ‘F’ group containing 2018 finalists Croatia, Canada and Morocco. Again, the two European nations pack too much firepower, but Canada’s Alphonso Davies and Morocco’s Hakim Ziyech will try to weave some magic and cause an upset or two.

The nation most synonymous with the FIFA World Cup, having won an unprecedented five editions and appeared in every tournament, Brazil, join Switzerland, Serbia and Cameroon in Group ‘G’. Brazil will be big favorites in the group, but the other three nations will feel they have a chance to reach the knockout stages.

This will likely be the last time we see Cristiano Ronaldo, almost 38 and having recently scored his 700th career club goal, competing in the World Cup. His native Portugal, however, have been drawn into this World Cup’s ‘group of death’, Group ‘H’, alongside Uruguay (who eliminated Portugal in 2018), Ghana (who will seek to avenge Luis Suarez’s handball in the 2010 quarter-finals) and South Korea (who delivered the final blow to Germany’s failed title defense in 2018). Ronaldo will need to be at the top of his game and add to his seven goals in the final to help Portugal climb out of the group stages.

One of the reasons the 2022 World Cup is so exciting is that there aren’t two or three favorites to lift the trophy. A multitude of nations will be licking their lips at the possibility of having strong runs in the deep end of the tournament.

Yes, a few stand out: Brazil, Argentina, Belgium and especially France. But the defending champions have exited in the group stages at each of the last three World Cups. And you can never ignore Germany, Spain and Portugal, especially if Ronaldo is fit. With England racing to the Euro 2020 final and semi-finals in 2018, they will also be optimistic to bring him home this time.

The cream of the football world will be honored in Qatar. Ronaldo and Messi are the obvious highlights, as they always are. 2018 Golden Boot winner Luka Modric will also feature in his last World Cup with Croatia, alongside Uruguay’s iconic attacking duo of Luis Suarez and Edinson Cavani.

Kylian Mbappe, the only teenager to score in a World Cup final – apart from the great Pele – will be France’s talisman this time around. France also have 2022 Ballon d’Or favorite Karim Benzema back in the national team.

The most notable response is Euro 2020 winners Italy, who were knocked out by minnows North Macedonia in the playoffs. This will be the second consecutive tournament without the four winners.

Another glaring absentee will be Manchester City’s goal-scoring machine Erling Haaland as Norway finished third in the qualifying group behind the Netherlands and Turkey.

Mohamed Salah, who played in the 2018 World Cup so painfully through injury, misses 2022 altogether, as Egypt fell to Senegal in the African qualifiers. Chile, winners of the 2015 and 2016 Copa America, will also be absent. They also missed the 2018 edition like Italy.

What is a personal finance app?

Aldi to recruit 1,000 workers in Spain in the fourth quarter