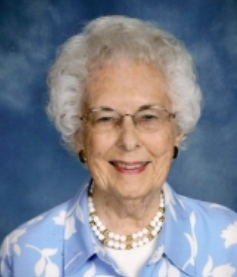 Evelyne (Evie) Anita (Bell) Henderson, a loving and beloved sister, mother, grandmother and great-grandmother, of Wakefield, Rhode Island, passed away on November 30, 2021, at the age of 100. She passed away peacefully. Born September 14, 1921 in McCook, NE, daughter of the late Hugh McKean and Ava Mae (Conklin) Bell, and mother of the late Bancroft (Skip) W. Henderson III.

She graduated from Shenandoah High School in 1939. She attended the Kahler School of Nursing in Rochester, MN, then Iowa State University where she met her future husband, Bancroft W. Henderson, Jr., professor emeritus of agriculture at the University of Rhode Island. After graduation, they were married in Shenandoah, Iowa on December 5, 1941. She lived in Newton, NJ, and Middlebury, CT, before moving to Rhode Island in August 1946, residing in Kingston and then in Wakefield for the rest of his life. life.

Evie was the secretary of women’s physical education at the University of Rhode Island. She was then assistant to the conference coordinator and then conference coordinator for the URI until her retirement in 1989. Evie has been active for years, serving in many organizations as president, vice president and member of boards of directors. Evie was a founding member of the Courthouse Center for the Arts. She was also a member of the Women’s Club of South County, the URI University Club Board of Governor’s – member of distinction in 1996, – the board of directors of the Willow Dell Beach Club, the Triangle Club, the Daughters of the American Revolution, member and South County Hospital Auxiliary volunteer, member and past president of PEO Chapter B Kingston – joining 1954 – South County Museum, South County Art Association, Fayerweather Craft Guild, South Kingstown Land Trust, Steering Committee of the Association of Emeritus Faculty and Staff (URI), Board member of the GFWC Women’s Club of South County, the Kingston Improvement Association, the Pettasquamscutt Historical Society, and the URI Foundation Campus Beautification Committee, 1983-2008 Member of the Congregational Church of Kingston since 1957. She has traveled extensively to Spain, England, France, Italy, Ireland and has taken a Black Sea cruise by visiting Greece, Turkey and Crimea.

On behalf of Evelyne, her family would like to express their gratitude to all the staff at Brookdale, Southbay for the exceptional care that Evie received. For the wonderful and caring nursing staff, the kindness of Dr Bandola and for everyone who knew Evie and treated her so well, we are very grateful.

In lieu of flowers, donations can be made to the Courthouse Center for the Arts.

There will be a private burial on the family grounds at Rose Hill Cemetery in Shenandoah, IA.