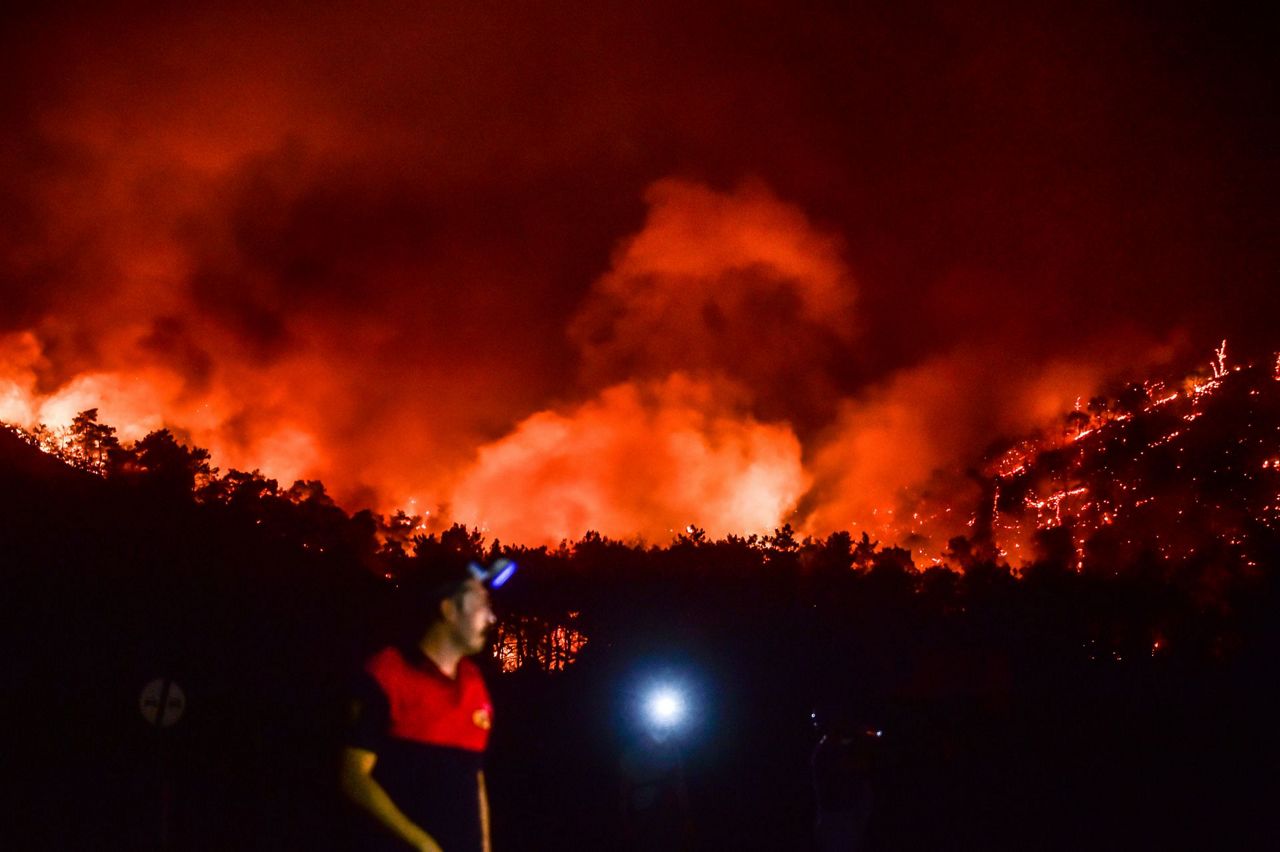 BOZALAN, Turkey (AP) – As Turkish fire crews continued their week-long battle on Tuesday against fires ravaging forests and villages on the country’s south coast, the government of President Recep Tayyip Erdogan was on top of that. further criticized for its apparent poor response and lack of preparedness for large-scale forest fires.

Fueled by high winds and scorching temperatures, the fires that started on Wednesday have left eight people dead, forcing thousands of residents and tourists to flee homes or resorts in boats or convoys of cars and trucks . Charred and blackened trees replaced some of the pine-covered hills of Turkey’s Turquoise Coast as many villagers lost their homes and livestock.

Firefighters were still battling nine fires in the coastal province of Antalya and Mugla, which are popular tourist destinations. Other active fires were reported in Adana and Isparta provinces. A total of 137 fires that have broken out in more than 30 provinces since Wednesday have been extinguished, officials said.

A senior Turkish forestry official described the forest fires as the worst in Turkey in living memory, although he could not say how many hectares of forest land the fires had devoured. He also couldn’t estimate how long it would take crews to put out the fires, saying strong winds rekindled flames that had previously been brought under control. The official spoke on condition of anonymity in accordance with government regulations.

Erdogan’s government has also been accused of undermining firefighting efforts by denying aid from Western countries, including rival Greece, at the start of the fires. Agriculture and Forestry Minister Bekir Pakdemirli dismissed the accusation, saying the government only turned down offers for planes with a water discharge capacity of less than five tons.

The Israeli embassy said on Tuesday that Israel had also offered to help, but Turkish officials turned down the offer, saying “the situation is under control.” He said the offer is still valid.

Local mayors posted videos advocating for zonal firefighting responses to wildfires in their areas as celebrities joined a social media campaign calling for foreign help to fight the fires. The campaign drew an angry reaction from a senior Erdogan official, Fahrettin Altun, who said: â€œOur Turkey is strong. Our state is strong. “

Erdogan, meanwhile, has also been accused of insensitivity after throwing tea bags at residents of a bus during a weekend visit to the fire-hit Antalya region.

Firefighting planes sent from Spain and Croatia were due to join planes from Russia, Iran, Ukraine and Azerbaijan on Tuesday. A total of 16 planes, 51 helicopters and more than 5,000 people were fighting the blazes, officials said.

Health Minister Fahrettin Koca said 36 people in Mugla and 11 people in Antalya were still being treated in hospitals for injuries related to the fires.

Authorities have opened investigations into the cause of the fires, including possible sabotage by Kurdish militants. However, experts mainly indicate that climate change is the cause of fires, as well as accidents caused by people.

A heat wave in southern Europe, fueled by warm air from North Africa, has caused forest fires across the Mediterranean, including in Italy and Greece.

In Italy, the head of the civil protection agency, Fabrizio Curcio, described as “dramatic” the forest fires affecting much of central and southern Italy. Firefighters were fighting seven major fires in Calabria, Sicily, Basilicata and Puglia on Tuesday, using planes near Matera, Basilicata and around three fires in Calabria. They have performed over 1,100 interventions in the past 24 hours.

Follow all of AP’s stories on climate change issues at https://apnews.com/hub/climate.

Copyright 2021 The Associated Press. All rights reserved. This material may not be published, broadcast, rewritten or redistributed without permission.