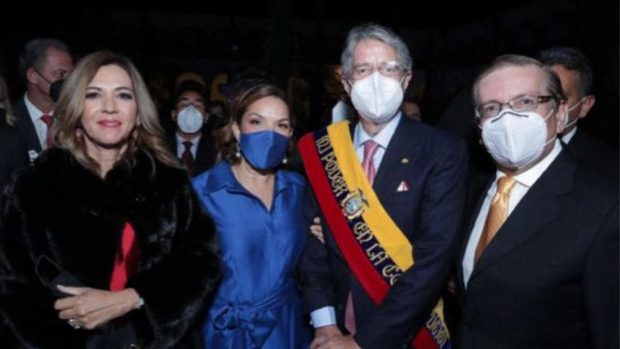 Ecuador’s new ambassador to Spain, Pascual del cioppo, assured OKDIARIO in a telephone conversation that the president of the Andean country, Guillermo Lasso, ordered to hide the payments that the government of Rafael Correa made to Kinema, the Podemos cooperative. This diary today reveals the conversation he had with the Ecuadorian diplomat in which he details how he went from opening an investigation for the payments to being paralyzed for “Don’t create a problem” neither the party of Pedro SÃ¡nchez nor that of Pablo Iglesias.

As reported by OKDIARIO, Correa’s government paid â‚¬ 394,000 to Kinema, the cooperative founded by Podemos MP Rafael Mayoral, to provide legal advice on evictions to Ecuadorians residing in Madrid, Barcelona, â€‹â€‹Valencia and Murcia. Some payments were made, at least, between the years 2013 and 2014 through the Embassy of Ecuador in Spain.

“President Lasso is aware of all contracts with Kinema”, begins by confessing Del Cioppo. And then he details how they ordered him to silence the member of the assembly. Esteban Torres, who registered a petition to the National Assembly of Ecuador (equivalent in Spain of the Congress of Deputies) for Ecuadorian Foreign Minister Mauricio Montalvo to make the contracts public.

â€œI have already spoken with Torres because we are not interested in creating more problems than there are already, because as long as the coalition government is maintained, it is a problem for us. Not because the SÃ¡nchez government has anything to do with it, but we can and it is part of the government. This is why it seems to us that it is not appropriate that we add fuel to the fire. We know that this issue can cause problems for the SÃ¡nchez government with its ally and we don’t want that to happen.. You have to know how to respect, â€says Del Cioppo.

And he continues: â€œThe Chancellor is not goingâ€¦ MP Torres has already been questioned and he is a person very close to Vox. It is part of the Madrid Agreement. And he did it because he is very close to the leaders of Vox. And maybe it was they who asked him to do it. But I already spoke to him (to cancel the inquiry request), I explained it to him and he understood. I said: ‘Look, those of Vox, instead of helping us, they are hurting us’. They are trying to create an incident. And that is not good. We have nothing against the government of SÃ¡nchez, on the contrary â€.

From the investigation of payments … to their silence

A mysterious change of trend, since it was Del Cioppo himself who, in an interview with Ecuadorian public television, assured that the Embassy of Ecuador in Spain had embezzled money to illegally finance the party of Pablo Iglesias. He also said that part of this amount was billed directly by Irene Montero, Minister of Equality. However, he now admits that it was a mistake to make these accusations.

“This was mentioned because at that time the reporter gave me a huge amount of stationery and obviously 10 or 15 minutes before going on the air you don’t have time to read 80 or 100 pages of a subject which, to begin with, you did not even understand well., and a few names were mentioned. It is true that some were true and others not “, he admits. also that he never had the evidence to support his accusations. â€œThe contracts are at the Chancellery. I never had one “, noted.

With these statements, Del Cioppo speaks once again – already as a diplomat – on the politics of the country in which he will represent Ecuador despite the fact that the Vienna Convention on Consular Relations to which he is subject categorically forbids him to “meddle in the internal affairs” of Spain.

An “offshore” in Panama

For more inri, this newspaper discovered that the future ambassador of Ecuador in Spain would have used his wife in the midst of a pandemic to open a business off the coast In Panama. According to the Caribbean Country Trade Register, on March 4, 2021, Del Cioppo’s wife, Priscila maria ramos, incorporated the company PMR MANAGEMENT INC. A company dedicated to “business advice, business start-up, operations with bank accounts and the acquisition and rental of all kinds of goods”, among others.

OKDIARIO has accessed the acts of the company off the coast, in which Del Cioppo’s wife noted the family home they both use in Ecuador: an impressive mansion located in the Urbanization Rinconada del Lago de SamborondÃ³n, in Guayaquil. Besides Priscila MarÃ­a Ramos, who appears as the president of the company, there are also Paul Lewis (as director and secretary) and Luis AnÃ­bal Ceballos CÃ³rdova (as director and treasurer).

Likewise, it was recorded that Priscila MarÃ­a Ramos used as a subscriber to two professional figures with thousands of companies off the coast in Panama on your behalf. The first, called Zuleyka AlemÃ¡n CalderÃ³n, appears in 4,078 other companies, and the second, VerÃ³nica CamaÃ±o, in 1,480 others. off the coast In Panama. Del Cioppo’s wife not only appears as president of PMR MANAGEMENT INC, she also appears as director and legal representative.

Priscila Ramos created the company off the coast change to Mata & Pitti, a law firm registered with Panama Papers, the famous list of tax evaders. Concretely, this company is linked to the foundations Cordoama, Jamay, Maycocks and Stabilo, all based in Malta’s tax haven. This link is based on the domicile of the entities: the first floor of the Advanced Tower on Ricardo Arias Street, in Panama City. An address that also appears in the company off the coast of the wife of the future ambassador to Spain. This firm, according to the deeds, is the resident agent of the company of Del Cioppo’s wife in the tax haven.

The discovery that OKDIARIO reveals today places Del Cioppo as ambassador to Spain in a compromised situation, since in Ecuador there is a provision of the General Contralorie of the State (the Spanish equivalent of the Court of Auditors) which prohibits public officials from having money in a country considered to be a tax haven, such as Panama. And at a minimum, the marriage formed by Del Cioppo and Ramos has $ 10,000 in Panama, which is the capital they had to deposit to create the company off the coast.

The election in Germany is revealing for Europe

From Kopi Socks to Cappuccinos: The Evolution of Singapore Coffee Culture