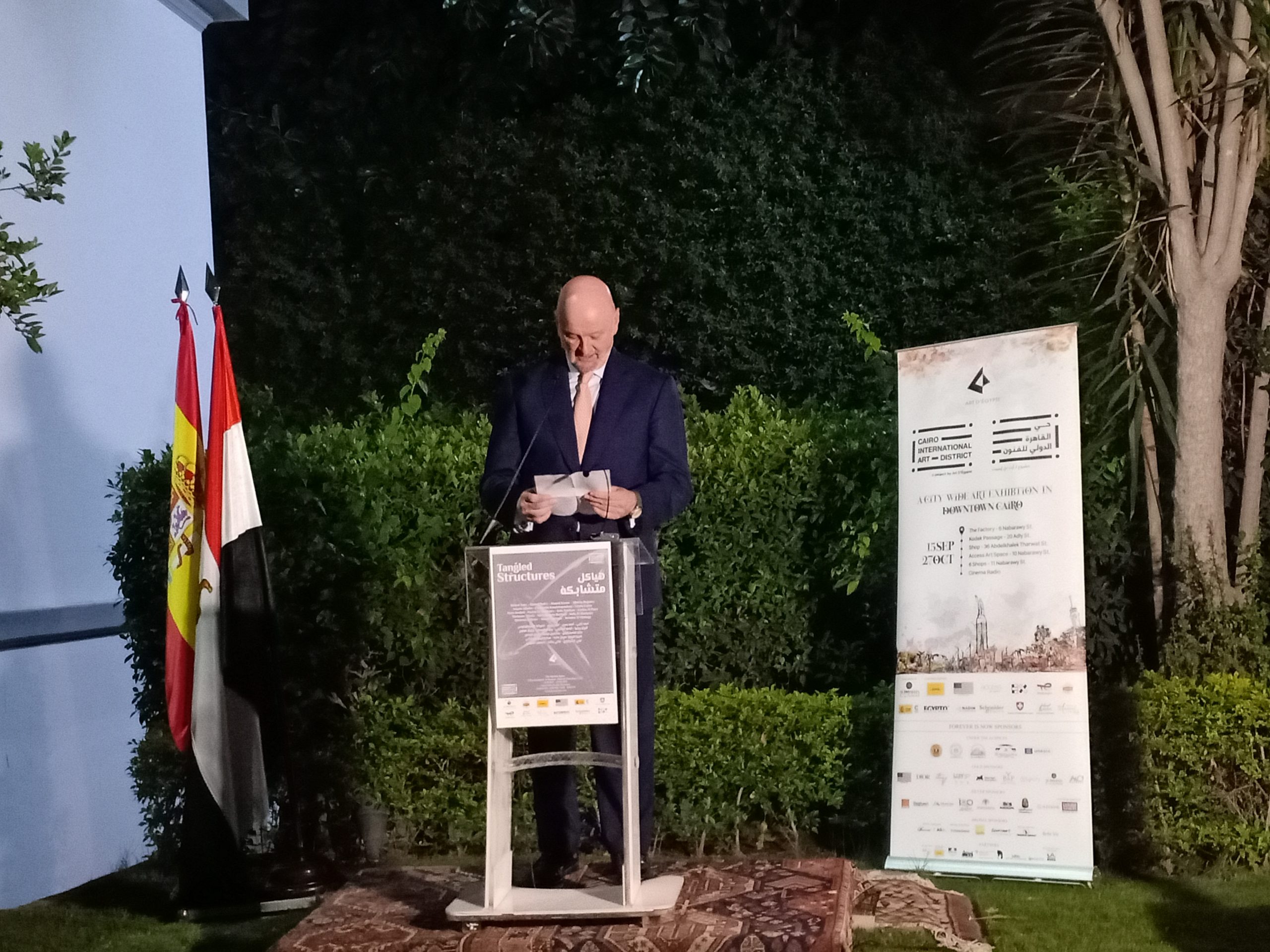 “Downtown Cairo reminds me of the artistic districts of Spain”: Spanish Ambassador

The Spanish Ambassador to Egypt, RamÃ³n Gil-Casares, delivered a speech at an event organized by the Embassy in Cairo in honor of the Spanish artists Alberto Reguera and Lucia Solinger, who participated in the â€œCairo International Art District â€, organized by Art D’Ã‰gypte in Downtown Cairo from September 15th to October 27th.

The Ambassador expressed his joy to attend the opening ceremony of the â€œCairo International Art Districtâ€ which was held last Tuesday.

â€œWe had the chance to admire and reflect on works of modern art from 12 urban spaces in downtown Cairo with enormous potential as an artistic district,â€ he said.

Gil-Casares mentioned that, in fact, part of downtown Cairo reminds him of Madrid and Barcelona, â€‹â€‹where works of art presented by emerging Egyptian artists, as well as international creative artists, have enjoyed great success.

The Ambassador thanked Nadine Abdel Ghaffar, founder of Art D’Ã‰gypte, and her team for her leadership in Art DÂ´Egypt, mentioning that he praised her vision which would help the citizens of Cairo to see modern art in a different context, as well as its efforts to enrich intercultural cooperation between Egypt and Spain.

“We are happy to participate in this artistic project, with the participation of the Spanish artist Alberto Reguera, who presented a three-dimensional painting of the pyramids and the Nile”, said the ambassador.

He mentioned that it was not the first time that Reguera has participated in the representation of his country, as he previously represented Spain in France and China.

American Ambassador Jonathan Cohen said he was proud to participate in these artistic projects, especially since there is always cooperation with European partners, and the United States Embassy in Cairo is sponsoring the exhibition. â€œArt of Egyptâ€, adding that he still considers cultural cooperation as part of diplomatic cooperation.

The artistic project is sponsored by â€œArt of Egyptâ€, a private cultural institution that seeks to introduce and exhibit contemporary art in distinguished and famous Egyptian places such as the Pyramids of Giza, through activities that bring together Egyptian artists and foreigners everywhere. the world.

the week at AMLO press conferences