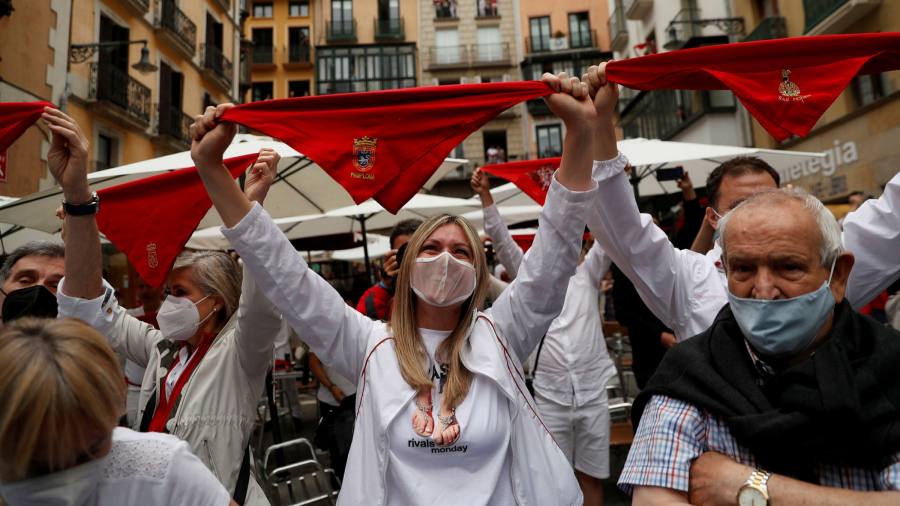 The Delta variant of Covid-19 and an increase in infections in younger, unvaccinated people have catapulted the coronavirus rate in Spain to the highest in mainland Europe, according to Financial Times research.

Infection rates in the country have skyrocketed over the past week, overtaking both Portugal and Russia, with the seven-day rate nearly tripling from 58 cases per 100,000 on June 29 to 156 Tuesday. Spain still lags slightly behind Portugal on the 14-day rate more widely used in the EU.

In response to the increase, the region of Catalonia – the most affected in the country – said on Tuesday it was reintroducing restrictions on nightlife, while Castile-LeÃ³n called for a return to a curfew system.

The rise in infections in Spain has been fueled by a dramatic increase among 12-29 year olds, among whom infections are around 20 times more common than among those over 70.

The Spanish government attributed much of the increase to social gatherings – including outdoor drinking sessions where young people share bottles – and greater mobility at a time when people are traveling to Spain on vacation. The country removed almost all of its national Covid restrictions in May.

But FT research, based on random samples taken by Spanish authorities, indicates that the more infectious Delta variant now accounts for around 30% of all cases and is expected to become dominant around July 17.

Spain’s trajectory brings it closer to infection levels in the UK – which ends coronavirus fight on July 19 – with both countries betting the increase in cases among younger people and largely unvaccinated will not cause more serious problems among older and more vulnerable groups.

The EU country with the highest infection rate is Cyprus, with a seven-day rate of 424, while the UK, where Delta is predominant, has a rate of 267.

The surge in cases in Spain comes at a delicate time for its tourism-dependent economy, in which the months of July and August are crucial.

â€œWe still believe that it is realistic to predict that by the end of the year we will reach at least half of the [tourism] figures for 2019, â€Reyes Maroto, Spain’s Minister of Tourism, told FT. She argued that the growing number of vaccinations in Spain – 41% of the population is fully vaccinated – was more important than infection rates “to measure country risk” and that Spain remained “a safe tourist destination” .

Infection rates passed the threshold last Friday to classify Spain as ‘red’ under EU guidelines, meaning travel to and from the country should be discouraged.

“I don’t see the Delta variant as a game changer given the high vaccination rate among the vulnerable Spanish population and even among the UK population as a whole,” said Prof Fernando RodrÃ­guez Artalejo, epidemiologist at the Autonomous University from Madrid.

â€œIt is true that there are a lot of infections, but neither here nor in the UK is it producing a significant increase in hospitalizations. The likely very negative impact on tourism is another question, â€he said.

The Spanish government hopes the new UK rules, which will be unveiled this week, will boost UK tourism to mainland Spain despite the upsurge in cases by removing quarantine requirements for fully vaccinated people.

Spain and Portugal both reject arguments that opening up to British tourists has led to an increase in the Delta variant. Fernando SimÃ³n, the doctor who has helped Spain lead the fight against the coronavirus, has stressed that British tourists must present either a negative test or vaccination documents before entering the country.

In Portugal, where the Delta variant accounts for 70% of cases, AntÃ³nio Costa, Prime Minister, says that it did not arrive from the United Kingdom but by people from the Indian subcontinent who came to work in agriculture and tourism. in the south of the country.

Portugal is working to step up vaccination as new cases rise exponentially. Health minister Marta Temido has warned that the number of daily cases is likely to double over the next two weeks, and doctors say increasing pressure on Lisbon hospitals could lead to a reduction in the number of care beds Intensives available for non-Covid-19 patients.

Retire in Europe with less than $ 25,000 a year at these 4 locations—InternationalLiving.com