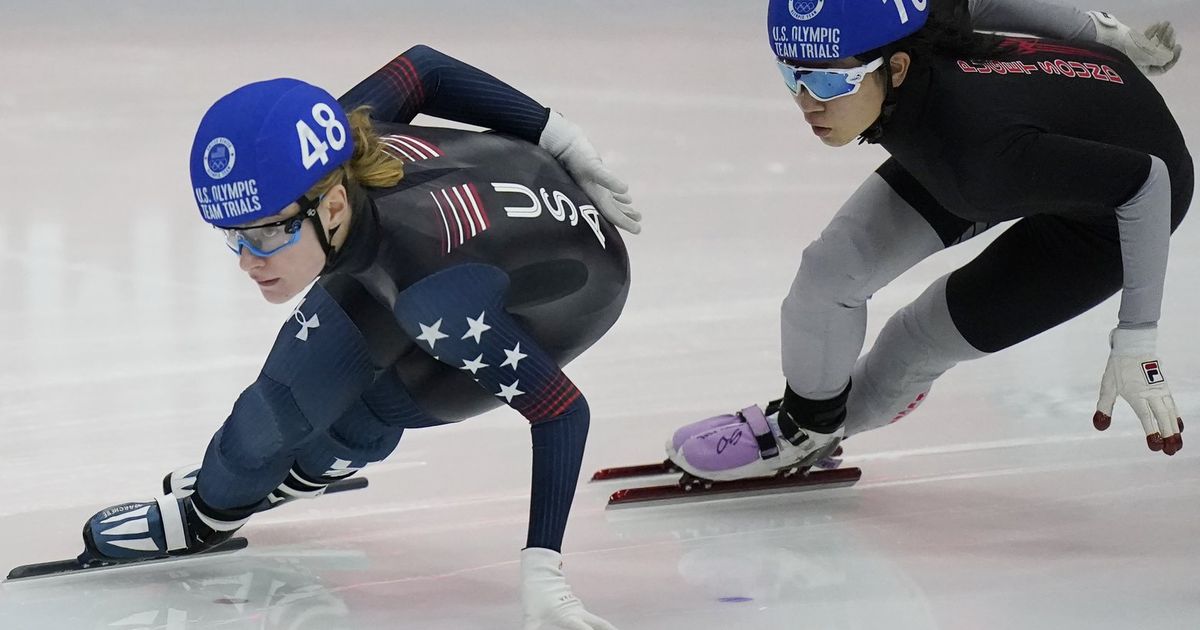 It should come as no surprise that local short track speed skaters are vying for medals at the Winter Olympics which begin Feb. 4 in Beijing.

But unlike previous years, this year’s local hopefuls are women.

Corinne (Corie) Stoddard, who was born in Seattle and honed her competitive skills at Pattison’s West, is a contender for multiple events.

Eunice Lee, 17, from Bellevue, was aiming for the 2026 Olympics but exceeded all expectations by becoming the youngest member of the USA team since 1998 and could compete in a relay.

Stoddard, unlike Lee, spent years inline skating on roller rinks – as did Ohno, Celski and Tran – before starting on the ice, as it offered an avenue to reach the Olympics.

Stoddard, 20, grew up looking up to Ohno and Celski and competed with Tran a bit at Pattison’s West before joining the national team. She is proud to be the first woman with Pattison’s West ties to compete in the Olympics.

“It feels really good because growing up I was always the girl who skated with the boys at Pattison’s,” she said. “I would be the only girl in the group running with the boys. And all my friends were the boys on the team, so it’s a good feeling to be, ‘I’m female and I’m as strong as the male skaters.’ “

But unlike the male stars before her who switched to ice speed skating, Stoddard decided to do both and also became a world-class in-line skater – inside and out. In 2019, she won the 10km at the World Junior Online Championships in Barcelona, ​​Spain.

At that time, she spent six months of the year in Europe competing in inline skating, and the other six months living in Utah and competing with the US short track speed skating team.

“It shows you the level of talent she has and the work she’s put in so she can come and go,” said Darin Pattison, Stoddard’s coach at Pattison’s West.

But with the onset of COVID-19, Stoddard has focused all his attention on the ice for the past two years, and it obviously paid off. She finished second overall in the US Trials in the 1500m and third in the 500m and 1000m.

Stoddard will compete in all three of these events in Beijing, starting with the women’s 500 meter heats on Saturday February 5. The events will be broadcast on NBC’s networks and its Peacock streaming platform.

It was what she dreamed of when in 2018 she left Washington to join the Utah national team, finishing high school online after attending Bonney Lake and Decatur (Federal Way) high schools.

“It was a relief,” Stoddard said of his emotions after making the Olympic team. “Just knowing that I had achieved my greatest goal and knowing that all the sacrifices I had made paid off – and finally being able to represent my country at the Olympics.”

It’s pretty exhilarating for someone who said she wasn’t very good at it when she started inline skating in Puyallup at the age of 6.

“But I really liked skating,” she said. “I just really enjoyed it and stuck with it and eventually started to get good at it.”

At age 11, she joined Pattison’s West Team Xtream. Pattison saw right away that Stoddard was special.

“You could see it in his eyes,” Pattison said. “She hated losing and liked to work hard and took it very seriously at a young age. She was just different from the average kid. Very determined, focused and driven.

“When she was younger, she was a bit small for her age, so there was always a girl faster than her that she could aim and target. Once she became the fastest girl, she had her sights set on boys so she always had someone to compete with and that definitely helped her get to where she is.

Says Stoddard: “Just genetics, male skaters are stronger than female skaters, and pushing myself to skate with them and follow them and run with them is what really made me stronger.”

“Corinne has tremendous mental toughness and a desire to win, so she doesn’t give up in any competitive situation,” Lee said in an email.

Eunice Lee took notice of her older Puget Sound Speedskating teammate, saying that Stoddard was someone she “looked up to and wanted to be like”.

Lee had a very different journey to get on the ice, but like Stoddard, she was not a natural star.

“I only started a sport when I was younger because I had poor coordination and my legs were so weak I would fall just walking,” she said. “My parents said they had to put me in a sport so I could run normally like other kids.”

Lee, who was born in San Diego, moved to South Korea when she was 4 and started doing rhythmic gymnastics and figure skating. When her family moved to Bellevue when she was 6, her father signed her up for Puget Sound Speedskating because her older brother had joined the team.

“I did figure skating, gymnastics, and speed skating for a few years before switching to speed skating completely,” Lee said. “I was just a pretty average skater for quite a while. I wouldn’t say I was way beyond everyone else.

That ended up changing. Last April, she was named short track development athlete of the year in the United States. At that time, she said her goal for 2021 was to make the U.S. World Junior Team. The Olympics weren’t even on his radar.

Things started to change last May when she moved to Utah with her mom to join the National Junior Short Track program (also called the FAST team). She saw immediate improvement by training with other top skaters and working with coach Li Geng.

“She really helped me analyze the parts of my technique that hadn’t gotten much attention before, which allowed me to correct the way I skate and adjust my technique and form,” said said Lee, who is a junior at Newport High School. in Bellevue and assists remotely. “His programs suit me really well. It really fits every skater’s needs and it really helped me to keep improving and not just plateauing.

“Over the past summer and the last two months of the fall I’ve seen so much more progress in my skating than ever before, that’s when (the Olympics) really started. to become a possibility for me – a realistic possibility and not just a dream,” says Lee.

By finishing fifth overall in the Olympic Trials, Lee earned the team’s last spot. The youngest skater at the trials was Eunice’s sister, Grace, who is 15 and skates with Puget Sound Speedskating.

Chang Lee was happy to see that Eunice had earned a trip to Beijing after watching her excel for years in her program.

“Eunice Lee always had the advantage of being flexible, which made it easy to imitate all the techniques I teach,” he said. “With the intensive training in preparation for this competition, she was able to keep up with the older skaters and with her technical skating she was able to maintain her speed while the other skaters slowed down at the end.”

Eunice Lee said one of the benefits of being on the Olympic team was to start training with the national team. She would love to take part in the relay in Beijing, but she knows that the experience will be very beneficial anyway.

“I just see this as a huge opportunity,” she said. “It will be my first international competition. I know the (other American skaters) are all at such a high level that the experience of training with them will help me become a better skater, so hopefully in four years I can be much better and compete at the Olympics (in individual events).”

For Stoddard, that time has come.

“I feel like it’s not really going to feel real until we get there,” she said. “I know I’ve been on the Olympic team and I know I’m going to Beijing, but it doesn’t feel real to me yet. I don’t think it will really settle down until we leave for the Games.