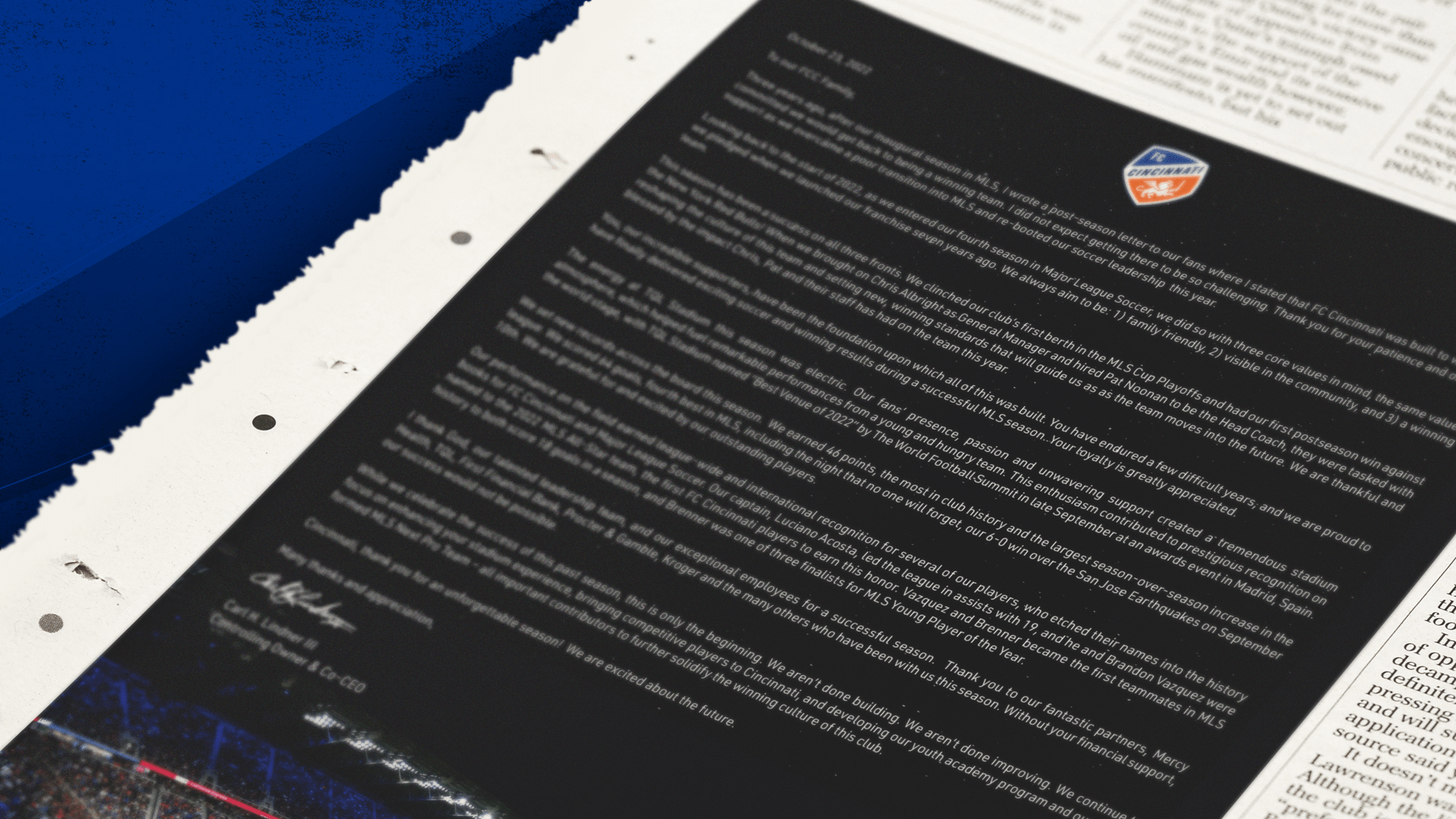 Three years ago, after our inaugural season in MLS, I wrote a post-season letter to our fans in which I declared that FC Cincinnati was made to win – and pledged to be a winning team again. . I didn’t expect it to be so hard to get there. Thank you for your patience and continued support as we overcame a poor transition to MLS and restarted our football leadership this year.

Looking back to the start of 2022, as we entered our fourth season in Major League Soccer, we did so with three core values ​​in mind, the same values ​​we promised when we launched our franchise ago seven years. We always aim to be: 1) family friendly, 2) visible in the community, and 3) a winning team.

This season has been a success on all three fronts. We clinched our club’s first berth in the MLS Cup playoffs and earned our first playoff victory against the New York Red Bulls! When we hired Chris Albright as General Manager and hired Pat Noonan as Head Coach, they were tasked with reshaping the culture of this team and setting new winning standards that will guide us as the team moves forward in the future. We are grateful and blessed for the impact Chris, Pat and their staff have had on the team this year.

You, our incredible supporters, have been the foundation on which this has all been built. You have endured a difficult few years, and we are proud to have finally delivered exciting and winning football results in a successful MLS season. Your loyalty is greatly appreciated.

The energy at TQL Stadium this season was electric. The presence, passion and unwavering support of our fans created a great atmosphere in the stadium, which helped fuel the outstanding performances of a young and hungry team. This enthusiasm contributed to prestigious recognition on the world stage, with TQL Stadium named “Best Venue of 2022” by the World Football Summit in late September at an awards ceremony in Madrid, Spain.

We have set new records at all levels this season. We got 46 points, the most in club history and the biggest season-over-season increase in the league. We scored 64 goals, fourth-best in MLS, including the night no one will forget, our 6-0 win over the San Jose Earthquakes on September 10. We are grateful and excited by our exceptional players.

Our performance on the field has earned league-wide and international recognition for many of our players, who have etched their names in the history books of FC Cincinnati and Major League Soccer. Our captain, Luciano Acosta, led the league with 19 assists, and he and Brandon Vazquez were named to the 2022 MLS All-Star Team, the first FC Cincinnati players to earn the honor. Vazquez and Brenner became the first teammates in MLS history to score 18 goals in a season, and Brenner was one of three finalists for MLS Young Player of the Year.

I thank God, our talented management team and our exceptional employees for a successful season. Thank you to our fantastic partners, Mercy Health, TQL, First Financial Bank, Procter & Gamble, Kroger and the many others who have been with us this season. Without your financial support, our success would not be possible.

As we celebrate the success of this past season, this is just the beginning. We haven’t finished building. We haven’t finished improving. We continue to focus on improving your stadium experience, bringing competitive players to Cincinnati and growing our youth academy program and new MLS Next Pro team – all important contributors to further solidifying the culture. winner of this club.

Cincinnati, thank you for an unforgettable season! We are excited about the future.

Many thanks and appreciation,