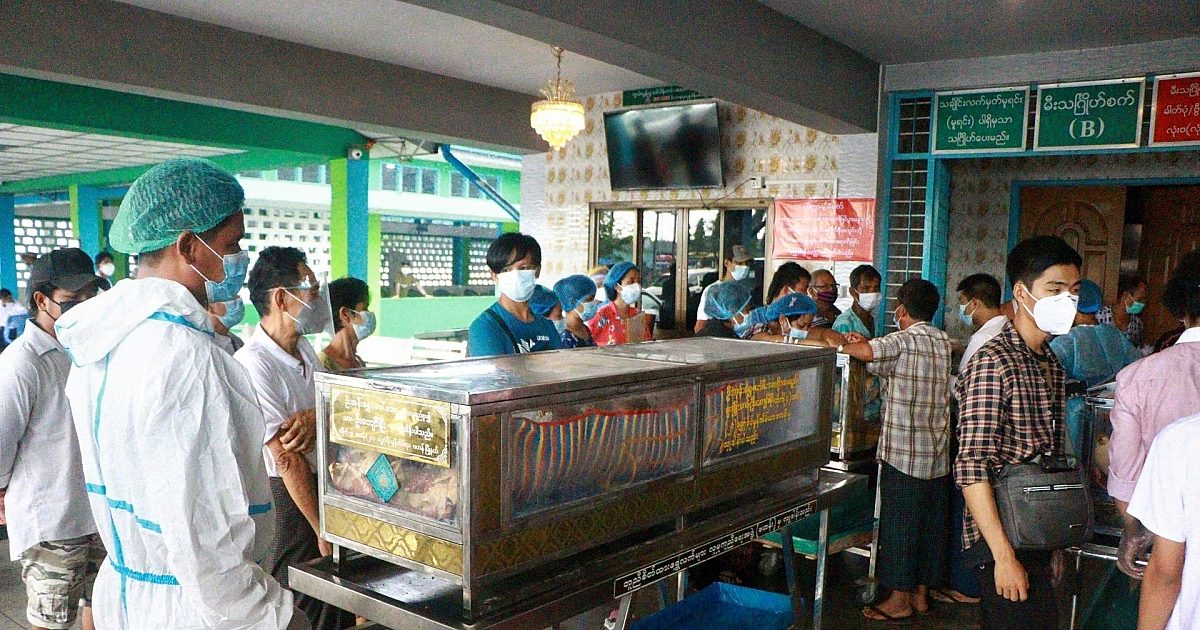 Laura Marshall, Myanmar director for the Norwegian Refugee Council, generally works to provide internally displaced people with food, shelter and other needs. As the pandemic spirals out of control in Myanmar, its work involves an additional, darker task.

â€œI literally write a message of condolence every day,â€ Marshall said. At least 20% of staff at his agency in Yangon, Myanmar’s largest city, have contracted COVID-19 since May. â€œIt’s horrible to listen to people trying to find places in hospitals and trying to get basic things like oxygen when they just aren’t available,â€ said.

Myanmar’s per capita death rate exceeded those of Indonesia and Malaysia at the end of July. Of more than 10,600 deaths from COVID-19 in the country, aid groups said more than 60% occurred in the past month.

Myanmar’s military takeover in February made matters worse because coup leaders are militarizing the pandemic to increase their power, activists say. The military targets healthcare workers with violence and oppression while limiting medical resources for civilians and dissidents.

At least 157 healthcare workers have been arrested, 32 injured and 12 killed since February 1, according to Insecurity Insight, which analyzes conflicts around the world. The army has issued arrest warrants against 400 doctors and 180 nurses accused of supporting and participating in the civil disobedience movement. Many of them no longer show up for work out of fear.

“I could be arrested by the junta at any time if I returned to the hospital” noted
a doctor in Mawlamyine.

The military is also limiting civilian access to healthcare, saving the country’s limited medical resources for itself and its supporters. The military leadership, known as the State Administrative Council, banned the sale of oxygen to civilians, but insisted it oversees the supply to avoid hoarding. Yanghee Lee, former UN human rights expert in Myanmar and founding member of the Special Advisory Council for Myanmar, said the military was banning civilians who support the pro-democracy movement from seeking treatment in hospitals military personnel and stopped distributing masks and personal protective equipment.

Some doctors have gone underground to consult online or visit patients at home. A doctor who worked as an orthopedic surgeon before the coup Recount
CNN, its telemedicine group, has seen more than 1,000 patients in one month.

â€œWe are treating at least 150 people a day,â€ he said at the end of July. â€œYesterday, two patients died during the consultation for lack of oxygen.

Marshall of the Norwegian Rescue Committee said some people in the IDP camps did not have access to health care. The number of displaced people in urban areas is also increasing. She recently heard of a woman who lost her life in childbirth.

â€œIt was not because of COVID but because of the lack of access to health care,â€ she said.

On Sunday, six months after the coup, military leader Min Aung Hlaing proclaimed himself prime minister and said he would rule the country under a prolonged state of emergency until elections in two years. He accused “fake news and disinformation via social media” of fueling distrust of the military’s response to the pandemic.

Afghans injured in fighting between the Taliban and the government in Kandahar province.
Associated Press / Photo by Sidiqullah Khan

The Taliban claimed responsibility for a suicide bombing and gun attack on Tuesday in the highly secure Green Zone in the capital Kabul. At least eight people died in the attack, which targeted the residence of acting Defense Minister Bismillah Mohammadi. The area is home to the United States Embassy and other diplomatic missions.

This week, the Taliban have targeted at least three provincial capitals. In Lashkar Gah, capital of southern Helmand province, Taliban fighters seized control of the government-run radio and television station and captured nine of its 10 districts. The Taliban ambushed and killed the director of the Afghan government’s media center in Kabul on Friday.

Sarah Leahy, director of the Doctors Without Borders project in Helmand, said several doctors remained in a hospital in the province for security reasons and to treat the growing number of war victims. “Houses are bombed and many people are seriously injured”, Leahy noted. â€œThe situation has been dire for months, but now it’s even worse. “

Afghan President Ashraf Ghani on Monday attended an emergency session of the National Assembly on escalating violence. He blamed the growing violence on the US-led “imported and rushed” peace process, which he said “not only failed to bring peace, but created doubt and ambiguity.”

The Taliban insurgency escalated in May when the United States announced plans to accelerate its military withdrawal and complete it by the end of this month. As the violence escalated, the Biden administration on Monday expanded its program to help Afghans who supported the United States during the war. Current and former employees of US-based news agencies, US-based aid and development agencies, and other relief groups who receive US funding can get help relocating . But aid workers have criticized the move because it does not facilitate their one-year stay in a third country while their immigration application is being processed. –OO

In the Lebanese capital of Beirut, thousands of people gathered on Wednesday at the site of a massive explosion in the port a year ago. Protesters clashed with police outside Parliament and staged marches where they chanted against the country’s political class.

At least 214 people died and thousands more were injured on August 4, 2020, after tons of improperly stored ammonium nitrates exploded in the port, making it one of the largest non-nuclear explosions Of the history. A government investigation into the blast has still not revealed who ordered the shipment or why authorities have ignored several internal reports about the risk.

Banks, stores and government offices closed on Wednesday, while embassies and government buildings hoisted flags at half mast. Families held prayers and a memorial inside the port and read the names of each victim. Residents placed a metal hammer sculpture with the words â€œAct for Justiceâ€ in front of the harbor, and people gathered and held photos of loved ones who died in the blast. The explosion exacerbated an economic crisis that plunged more than half of the country’s population into poverty. –OO

A man throws water from a swimming pool as a fire approaches his home near Athens, Greece on Friday.
Associated Press / Photo by Thanassis Stavrakis

More than 500 firefighters have worked this week to contain a major forest fire on the outskirts of northern Athens that has caused thousands to flee. Authorities in Greece, Spain, Italy and along the Turkish coast are also grappling with deadly fires as the region records historic temperatures above 100 degrees Fahrenheit.

The Athens fire was one of 81 wildfires that broke out across the country in 24 hours from Monday evening. Firefighters said they deployed five dropped planes, helicopters and several groups of volunteers. Authorities also evacuated more people from the southern Peloponnese region as a fire burned near ancient Olympia. Forecasters said the heatwave is likely to continue until the end of the week.

In Italy, firefighters said they treated more than 800 outbreaks in 24 hours over the weekend, most in the south. Authorities evacuated more than 800 people, including nuns from a convent. Thousands of people fled towns and tourist resorts along the Turkish coast, and volunteers used boats to evacuate those trapped. Turkish authorities said they contained more than 130 fires and reported at least eight deaths. –OO

Indians protest against rape of children

Hundreds of protesters took to the streets of New Delhi on Wednesday, the fourth consecutive day of protests against the rape and murder of a 9-year-old. Authorities said the girl was from the Dalit community, India’s lowest caste, which still faces discrimination.

The girl’s family said she went to fetch water from the crematorium near her home on Sunday when she was raped. They said the crematorium priest Recount
her daughter’s mother was electrocuted and convinced her to cremate the body, saying a police investigation could involve the removal of her organs for an autopsy and their sale.

Protesters held up banners that read â€œJustice for the Girl from Indiaâ€ while chanting similar calls. Almost 90 rapes were reported daily in India in 2019, according to the National Crime Records Bureau. Campaigners believe the real number is much higher as many cases go unreported. –OO

Turkey: a country full of opportunities for Spanish investors and entrepreneurs