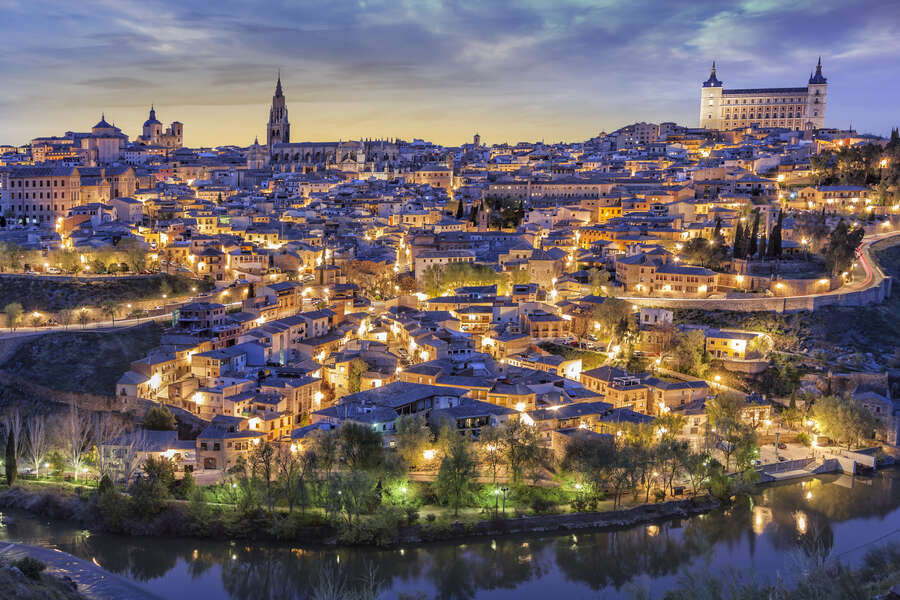 Best Things to Do in Toledo, Spain When Visiting on Vacation

If you’ve been to Madrid or read Don Quixote, you’ve probably heard of Toledo: a medieval walled city that looks like a real-life version of the Emerald City of Wizard of Oz. Trains and public transport frequent the ancient city several times a day, as it lies 45 miles south of the Spanish capital, making it an easy day trip for the majority of travelers. And if you spend the day with Adolfo Ferrero Martinez, native of Toledo and owner of the guide company Toledo de la Manoyou’ll want to cancel your return and stay a night or a century or two.

Once the capital of Spain (until 1560, when Philip II decided to move his court to Madrid), it’s easy to see why the king deemed Toledo worthy of royalty. The city sits on a hill surrounded by the Tagus River and the plains of Castilla-La Mancha, and a maze of winding roads leads to a castle perched at the top. “As the most important city in Spain until the 16th century,” says Martinez, “there is no place in the country where one can trace its culture, art and traditions better than ‘in Toledo, a place frozen in time.

Declared a UNESCO World Heritage Site in 1986, Toledo is regularly photographed as one of the most beautiful places in Spain. So we give you a few more reasons to spend the night, including a two-star Michelin restaurant in a cigar, seeing the city lit up at night, eating marzipan in his birthplace, exploring the melting pot of cultures, and finding out why the painter El Greco fell in love with this place.

Explore the melting pot of cultures

Known as the “City of Three Cultures”, Toledo’s architecture is where it is thanks to the Christians, Jews and Muslims who have coexisted here throughout history. And it’s a super walkable town to see everything.

by Martinez personalized and tailor-made tours will take you around the city and highlight what’s special about it. It should be noted that Martinez wrote his own guide because the rest of the market information was lacking. He specializes in focusing on who you are Actually interested, and IMO is one of the greatest tourist guides in the world.

Some of the buildings you might see on one of his tours encapsulate the three cultures. The remarkable Mosque of Cristo de la Luz is the only mosque still standing and one of the most important pieces of Hispano-Muslim and Mudejar architecture in all of Spain. Toledo Cathedral is one of three Gothic architectures of the 13th century and, as Martinez notes, no other monument in the city better represents the power of the Catholic Church and its expression through art. The Synagogue of El Tránsito is an excellent example of Jewish power in medieval Toledo and, for architecture lovers, of the true Mudejar style.

The history of the McRib

Eat two-Michelin-star-awarded food at a mansion

Those who overlook small towns for fine dining experiences are missing out, and Toledo is no exception. Restaurant Ivan Cerdeno is a two-star Michelin restaurant located in a beautiful cigarral (a historic country house) with stunning views, run by chef Iván Cerdeño.

Admire the rose garden and the park on the way up to the restaurant. Inside, sample the cuisine of La Mancha through traditional dishes and local ingredients, depending on the season. Expect chef’s renditions of dishes like asadillo Manchego (roasted peppers and tomatoes, garlic, cumin and olive oil), sardines and red partridge, and perfectly executed wild game meats. Treat yourself to the ‘forgotten menu’ (seven courses) or the ‘souvenir d’un cigar’ (10 courses) with local wine pairings for a memorable keepsake.

Walk through the maze

Walk over the Puente de San Martín, a medieval bridge that crosses the Tagus, and venture into the city’s maze. Cobbled streets wind around the old town, where mosques, synagogues and Gothic churches collide. The high-walled streets also keep you cool on a hot summer day.

Many shops in the old town cater to tourists, but they are a great opportunity to buy damask and steel. Keep an eye out for little figurines of Don Quixote riding his trusty donkey or perhaps attacking the windmills, as the fictional character of Miguel de Cervantes hails from this region of La Mancha and the beginning of the book takes place here. There is also a statue in the street of Cervantes himself.

Plus, it’s worth staying until evening, because seeing the cobbled streets in the evening with the city lit up is a completely different and romantic vibe than during the day.

Marzipan was invented in Toledo by the nuns of the Convent of San Clemente in the 11th century. When the nuns once ran out of wheat resources for bread, they mixed in sugar and almonds instead, and bam – created the incredibly sweet and delicious confection. There are countless marzipan spots in the city, but only three places do it the traditional way. Saint-Tome, a 7th generation family business, is the only place that does all production, start to finish, in the city. Don’t forget to grab a few cans of marzipan to take home (hell, even your gluten-free friends can enjoy this treat).

For a few local restaurants inside the walled city, Martinez is a fan of La Orza, Alfiléritos 24and The Botero (where the dumplings are some of the most succulent and flavorful I’ve ever had). For restaurants with a view, you will have to cross the river. Besides the parador and Ivan Cerdenocheck Sale of Areas, an iconic restaurant from 1891, serving traditional dishes like red partridge. Art lovers will be delighted to know that they are dining at the same place where surrealist Salvador Dalí used to get drunk and run through town in costume.

And since you’re in Manchego cheese country, it’s only fitting to hit the Queso Manchego Museum to learn the backstory of cheese, as well as other traditional dishes of the region.

ICYMI, Domḗnikos Theotokópoulos, the Greek painter and sculptor better known as El Greco to the general public, helped define and influence the Spanish Renaissance. El Greco first tried his luck in Madrid but it wasn’t possible so he ended up in Toledo. There he received commissions for some of his most famous works, including “View of Toledo” (one of only two surviving landscape paintings from his works) and “Opening of the Fifth Seal”.

Discover an important collection of pieces by El Greco and other works of art from the 16th century in the Santa Cruz Museum, housed in a former orphanage and hospital. And of course, stop Greek Museum, a museum dedicated to his works. If you haven’t seen the IRL inspiration “View of Toledo”, head over to the Toledo Parador at sunset to instantly understand why he painted it in the first place.

Check in to a cigarral, parador, or stay in a hotel inside the maze

There are several notable hotels in Toledo. Paradores are state-run hotels in Spain, made up of properties located in monasteries, castles, fortresses and covenants, or outstanding modern locations like Toledo Parador. People come to this hotel to capture the best panoramic view of Toledo. If you’re staying overnight, enjoy viewing the “Emperor’s Hill” at sunrise for one of the most awe-inspiring views with an espresso in hand. There’s also a swanky pool for those summer days when afternoons are best spent cooling off in town taking siestas.

Check in Cigarral de las Mercedes, a five-hectare estate with sweeping views of the city, to see what it’s like to stay in a posh Spanish mansion for a few nights. The Garden Rooms are located on an olive grove with an outdoor shower in the private garden, giving the impression that it is hours away from the city center, when in fact it is less than two miles away.

Stay within the city walls at Eugenia de Montijo, Autograph Collection to see what happens in the walled city after dusk. The luxury hotel is tucked away on a narrow cobblestone street, within walking distance of all sights, attractions, and restaurants. The old building is also the former palace of Empress Eugénie de Montijo of France. At night, if you open your windows, you can almost feel the city’s history come to life in your room.

How effective is the monkeypox vaccine? Scientists scramble for clues as trials ramp up | Science