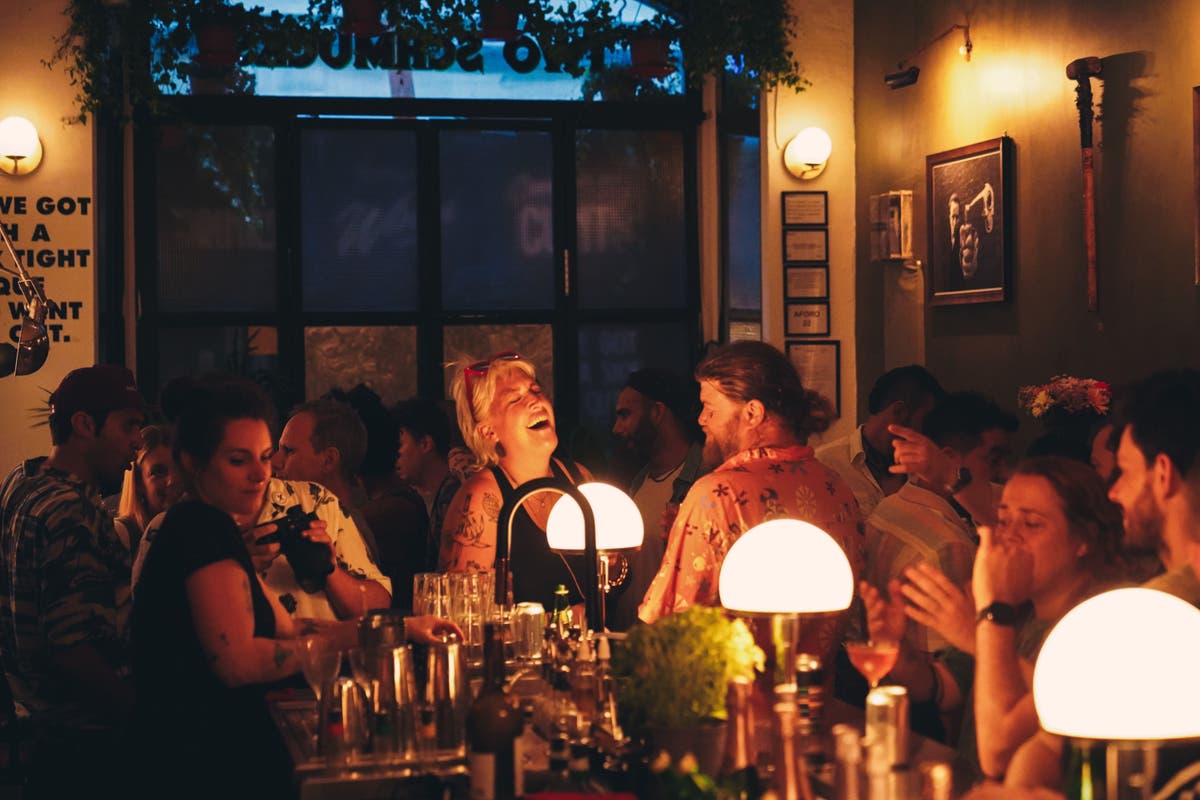 A The Barcelona pub crawl with Moe Aljaff is not for the faint hearted.

The Spanish are said to have more drinking places per capita than any other nation. On a still hot October night, I felt like I was taken to most of them. Moe invited me to his corner to see how Barcelona drink these days.

We start with its own flagship joint, Two Schmucks, in the El Raval neighborhood. The bar was ranked 26th best bar in the world, and it is expected to improve its position in the next ranking, announced next week. Aljaff recently handed over the day-to-day operations to Juliette Larrouy and Pom Modeste, two charismatic French women who inherited the â€œschmucksâ€ coat and revamped the menu to create something fresh.

â€œComedian George Carlin made it a rule that at the end of each year, he throw out all his old stuff,â€ Moe says. â€œThat’s what I told Pom and Juliet. You have to do it your way.

We are working on the new drink menu, which is inspired as much by food as it does cocktails. There is Juliette’s favorite, a mixture of melon, gin, vermouth and burrata; a tribute to sticky rice with mango; even a boeuf bourguignon-inspired drink, which sounds revolting but works somehow, although I wouldn’t recommend trying to recreate it at home.

The balance and elegance of the drinks oppose the slightly offbeat aesthetic of the bar, whose walls are adorned with pop-culture references and where the shoes of old bartenders hang from their laces above a beam. high, like bats. You can see why the Two Schmucks describe their philosophy as â€œFive Star Dive Barâ€.

A tattooed man – aren’t they all bartenders? – and a 31 year old boy, Aljaff has a riot in his blood, to go with all the alcohol. His parents are Kurdish Jews who fled Iraq after the First Gulf War when Moe was a baby. After traveling through Europe, the family eventually found refuge in Sweden, where Moe grew up. At 18, Moe left Sweden to learn the bartending trade. In Oslo, he met AJ White, who would become his business partner – the couple moved to Barcelona and became Two Schmucks, starting as a pop-up before opening a permanent site in 2017.

The irreverence of the name belies a serious dedication to cocktails. Two Schmucks has been so successful that it has spawned two more bars: Fat Schmuck, which is slightly more focused on food, and a brand new hangout, Lucky Schmuck, which has a full range of beers to complement the spirits. . All three are located on a single narrow stretch in the El Raval neighborhood, a road that Moe affectionately calls â€œSchmuck Streetâ€.

It’s a strange time for hospitality in Barcelona. The city’s left-wing mayor, Ada Colau, has been hostile to luxury tourism. With the prospect of Catalonia’s independence looming, international brands are heading to Madrid instead. But the situation created conditions conducive to improvisation and innovation.

After Two Schmucks, we visit a pancake bar, Creps al Born, which doubles as a lively margarita joint, lanterns swinging above diners’ heads and the smell of sizzling dough mixing with the smell. squeezed limes. Then direction Marlowe, named after the detective of Raymond Chandler, specialist in spins. Or at least I think so. At this point of the night, things get a bit blurry.

At the other end of the spectrum of anarchy is the eternal Boadas, an Art Deco jewel of a bar opened in 1933, not far from the Ramblas. Waiters in bow ties and tuxedos prepare martinis for a mix of locals and visitors. Another stronghold of Barcelona tradition is the Caribbean Club, an underground bar founded in the 1970s and run by Juanjo Gonzalez, who looks like an old movie star and knows more about rum than anyone else. To walk in is to walk into a chic bar in Bridgetown, Barbados, in 1980, in the best sense of the word.

The characteristic image of alcohol consumption in Barcelona is that of punters spilling out onto the road holding glasses of beer or cava, but there are secrets behind the closed facades: the Barcelona crowd is not used to bars in hotels, so even the magnificent Punch Room at the hotel’s edition, complete with a full-size pool table, is criminally underutilized.

About a kilometer and a half from Two Schmucks is Sips, a new “drinkery house” from Simone Caporale and Marc Alvarez, two international superstars. Italian Simone ran Artesian at Langham, which has been named the world’s best bar four times in a row, while Marc was in charge of cocktails for the ElBarri group. At Sips, the twist is that they have done away with the traditional bar altogether. Instead, the bartenders roam freely among the guests and prepare their cocktails at the table. The effect is elegant but relaxed.

â€œIt wasn’t the easiest opening,â€ says Simone. “But we are finding our marks.” He serves me his signature, the Sips, served in a magnificent mouth-blown glass. He is not the only British importer. In an unexpected downpour, I dive into 14 de la Rosa, run by Dean Shury, who spent years at Quo Vadis and Groucho before running the bar at the Chiltern Fire Station.

In search of a better life balance for his family, Shury moved to Barcelona and took over an old place in a quiet street, which he transformed into this cocktail haven. He makes me a Silver Bullet: a drink that’s easy to mess around with but perfectly balanced in his hands.

Somewhere between the new, the old, the classic and the experimental, Barcelona’s bars betray the energy – sometimes calm, sometimes chaotic – of a city that questions itself. Alcohol might not have all the answers, but the world always tends to look brighter after a martini or two.