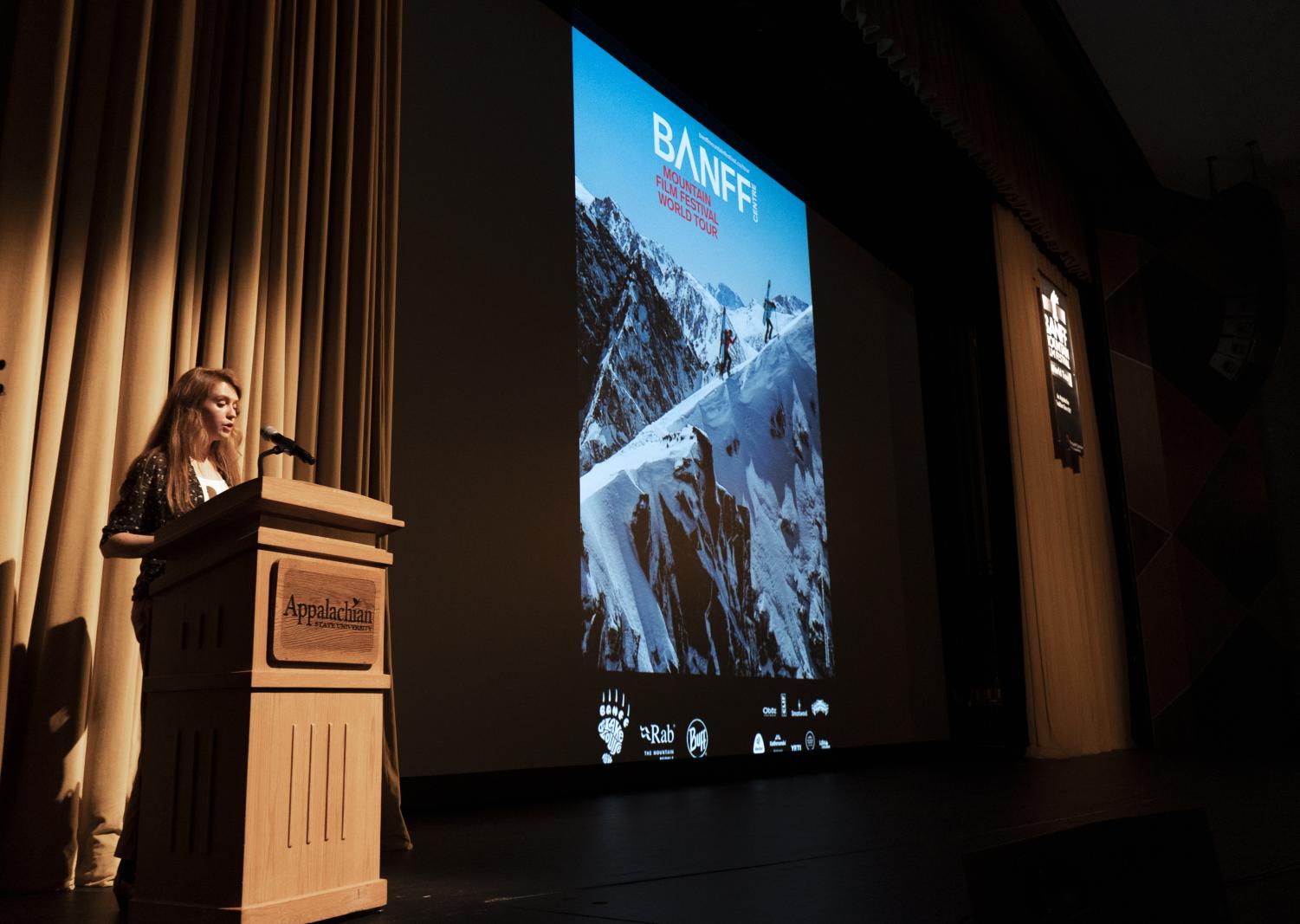 This Bockoven gives a brief introduction to the films before the start of the screening.

Outdoor enthusiasts and movie buffs alike in Boone were transported to a world of snow-capped peaks, adventurous rock climbs and global exploration on the Banff Mountain Film Festival International Tour from September 10-11.

Showcasing films from Argentina to Baffin Island to the mountains of Patagonia, the Banff Mountain Film Festival was held at the Schaefer Center for its 25th year in Boone. This nature-focused event featured 14 films covering topics related to outdoor living and exploration.

â€œWe brought it in as a way to showcase some really cool mountain-focused movies related to mountain sports, mountain cultures, mountain adventures and the environment,â€ said Richard Cambell, Associate Director of Recreation of the University.

The Banff Mountain Film Festival is based in Banff, Alberta. Each year, the event presents around 400 nature-based films and documentaries from 40 countries.

The winning films are then selected for an international tour, and the tour has been taking place in Boone for almost three decades.

App State Junior This Bockoven organized student volunteers and hosted the September 10 screenings. She said she appreciated the wide variety of themes in the film.

â€œIt’s not just about watching amazingly fit people climb the world’s tallest mountain or Red Bull athletes doing crazy things. It is also a question of failure, of family and of the universal joy of being outdoors, â€said Bockoven.

She said App State’s location makes it the perfect location for this â€œicon of the mountainâ€ event.

â€œWe have such a wealth of mountain and Appalachian culture here at ASU, as well as a great outdoor community. It makes the show feel more like a family movie night than a film festival, â€Bockoven said.

App State senior Jeremy Doblin hosted the 9/11 screenings. He said the event drew nature lovers from all over North Carolina.

â€œApp State is known to be an outdoor school. You kind of have that niche of people coming out, â€Doblin said.

Campbell, Bockoven and Doblin recognized the feature film from the second night, “Colitas”, as their favorite weekend screening. Directed by Jaime Murciego and Pablo Iraburu, this Spain-based documentary follows five indigenous Bolivian women on a climbing expedition to the top of Aconcagua Mountain in Argentina.

â€œIt was just a really cool movie about liberation and empowerment, more than escalation,â€ Campbell said. “That’s what really resonated with me.”

Both evenings started with local bands performing live music on stage at the Schaefer Center. Previous years included raffles, photo contests, and guest speakers, but COVID-19[female[feminine changed the routine. Bockoven said this year has focused heavily on films alone rather than additional activities.

After canceling last year’s festival due to the pandemic, Campbell said he felt thrilled to finally bring it back. In accordance with Schaefer Center guidelines, the September event seated just 800 people and required masks to be worn.

â€œAll tickets were sold out. So it was really a little disappointing, at least in my mind, not to see the Schaefer Center completely full, â€Doblin said. “But there was always a really big crowd, and it was kinda great to see everyone come out and be so engaged in the film festival.”