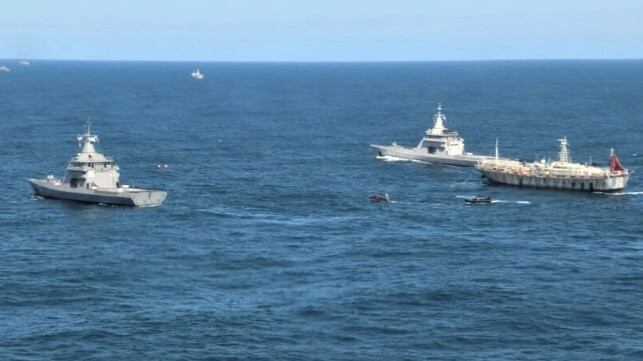 The Argentine Navy has deployed its two new Offshore Patrol Vessels (OPV), ARA Bouchard (P-51) and ARA Piedrabuena (P-52), to monitor an international fishing fleet traveling near the country‘s Exclusive Economic Zone (EEZ) en route to the South Atlantic. Although there have been no confirmed reports of these vessels engaging in illegal, unregulated or unreported (IUU) fishing, recent history suggests that it is happening or will happen soon.

Make good use of new units

Bouchard and Piedrabuena are assigned to the Maritime Patrol Division of the Argentine Navy (División de Patrullado Marítimo: DVPM). With a Beechcraft B-200 Super King Air aircraft assigned to the Naval Air Maritime Surveillance Squadron (Escuadrilla Aeronaval de Vigilancia Marítima), the two units monitored ships passing through the Strait of Magellan en route to the high seas in the South Atlantic. , according to a Dec. 23 press release. After leaving Admiral Zar’s base at Trelew, Chubut Province, the B-200 flew “over the fishing fleet, coordinating with the patrol boats, providing surveillance…of the activities carried out by these vessels of different nationalities”.

The ARA support ship Estrecho de San Carlos (A-22) would have replaced Bouchard as the main ship assigned to Ushuaia, the capital of the province of Tierra del Fuego, which is near the Beagle Channel and Argentina’s border with Chile.

Argentina acquired four gowind– French class OPVs, manufactured by Naval Group. The third unit, ARA Storni (P-53), was delivered in October 2021, while the fourth and final ship, ARA Bartolome Cordero, was launched in September 2021 and will likely be delivered in early 2022. The four units will help the Argentine Navy improve its patrol and surveillance operations.

There have also been developments from a bureaucratic point of view. At the end of February 2021, the Ministry of Defense created the Joint Maritime Command (Comando Conjunto Marítimo: CCM) to “patrol and control [Argentina’s] sea ​​and river areas. The Ministry of Defense announced that from January 1, the CCM took command of maritime surveillance operations, which includes surveillance of the international fishing fleet that sails near the country’s EEZ.

The Argentine Navy will have additional air and surface units in the near future. At the end of December, the Argentine government announced that the local Tandanor shipyard would build a new icebreaker for Antarctic operations to replace the aging icebreaker. Almirante Irizar (Q-5). In the same month, the Ministry of Defense announced that two refurbished Sikorsky SH-3H Sea King medium helicopters will be acquired to improve capabilities and operations, including search and rescue, in the southern regions of the country and during operations in Antarctica. The price of the two helicopters, including personnel training and spare parts, is $12.8 million.

Alas, the service still has no operational submarines. Additionally, aside from the four new OPVs, the rest of the fleet still needs to be modernized, which limits the service’s capabilities for constant, long-range patrol operations to monitor illegal activities of the international fishing fleet.

Argentina has a history of fighting against IUU fishing. For example, in 2016, the Mantilla-class patrol boat Prefect Derbes (GC-28) shot down and sank the Chinese fishing vessel Lu Yan Yuan Yu 010. The ship reportedly ignored the warning shots and attempted to flee, only to ram the Argentine patrol boat. Lu Yan Yuan Yu would have fished without authorization in the Argentine EEZ near the province of Chubut.

The author of this article has written several essays for CIMSEC on IUU fishing in Latin American waters (see “Latin American Marines Combat Illegal Fishing” from 2016 and “The Ecuadorian Navy’s Ongoing Fight Against IUU Fishing” from 2020. Regional cooperation is key to solving this security challenge, which can be addressed by modernizing the Inter-American Treaty of Reciprocal Assistance (Tratado Interamericano de Asistencia Recíproca: TIAR) into a 21st century agreement that is also charged with combating IUU fishing.

Transforming TIAR into TIAR 21, as the author suggested in a July 2021 Regional Insight article for the William J. Perry Center for hemispheric Defense Studies at the US National Defense University, would be an essential step to more effectively monitor the vast waters of South America and prevent the continued maritime plunder of precious marine resources by extra-regional fishing fleets.

An international fishing fleet, made up of vessels from countries such as China, Spain, South Korea and Taiwan, operates constantly throughout South America, depending on the season. For example, the same fleet operated around Ecuador, near the Galapagos Islands, in July-August 2021, then traveled south through Peru and Ecuador. It currently crosses the Strait of Magellan to operate in the South Atlantic during the summer months below the equator. In Argentina, fishing vessels focus on squid, spider crab (centolla) and crab fishing.

According to a December report by the Argentine daily La Nación, the “fishing season” began in early December, when some 180 vessels, “mostly from China”, crossed the Strait of Magellan after operating in waters near Chile and from Peru. “By April, there will be around 500 ships operating in the area,” said Major Néstor Alberto Kiferling, head of Argentina’s maritime traffic service. As modern as gowind are class vessels, the international fishing fleet far exceeds the current capabilities of the Argentine Navy, even with the support of air units and other vessels.

It has been argued that Argentina is in a better situation vis-à-vis IUU fishing today compared to five years ago. Indeed, the Argentine Navy is leveraging its two new OPVs by deploying them in the Strait of Magellan to monitor the international fishing fleet crossing the country’s EEZs en route to the South Atlantic. As with many other South American countries, one of Argentina’s main environmental challenges is IUU fishing, but while IUU fishing is problematic when perpetrated on a small scale by fishing vessels from Argentina or a neighboring country, it can become truly catastrophic when practiced by hundreds. international fishing vessels with no interest in preserving the maritime environment.

Wilder Alejandro Sánchez is an analyst who focuses on international security and geopolitics. The opinions expressed in this article belong to the author alone and do not necessarily reflect those of the institutions with which the author is associated.

This article appears courtesy of CIMSEC and can be found in its original form here.

The views expressed here are those of the author and not necessarily those of The Maritime Executive.

The cards that could hold the secret to curing cancer