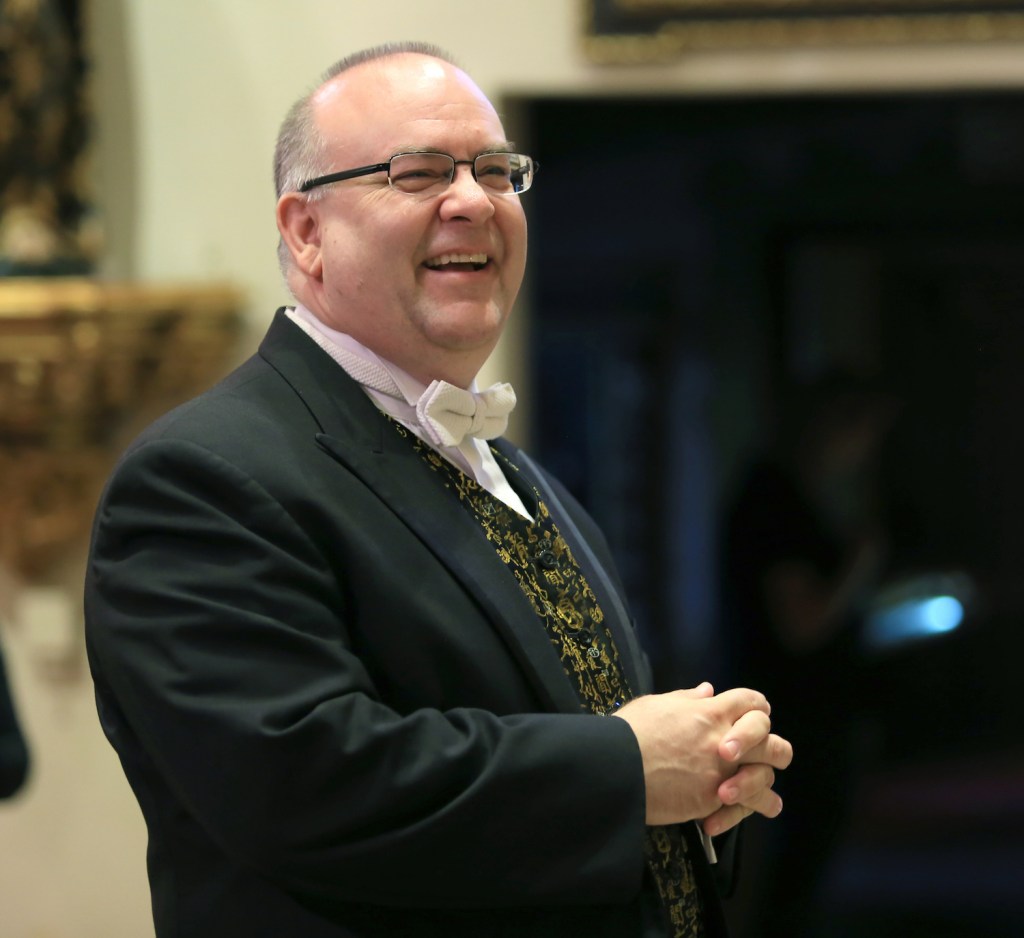 The Carmel Bach Festival has completed an almost flawless cycle of COVID-19 compliant main concerts at the Sunset Center.

These evenings are repeated this week at the Festival. Additionally, a new daytime chamber music series has been added to the music schedule this week in Sunset’s Main Hall and Foyer.

He will leave at the end of this season and a new artistic director will be hired for the future. One of Goodwin’s contributions to the Festival during his decade with the organization was the orchestra’s complete transition to period instruments, which gave audiences the pleasure of hearing for the first time. times the major works of Bach interpreted by a period orchestra at baroque height. Goodwin also commissioned new works from living composers, which premiered at the Festival. He expanded the opera lineup and popular Crossover programs, conducted other major choral works, and hosted and conducted a series of entertaining concerts for young people. Goodwin’s choice of Briton Peter Hanson as first violin developed strings excellence. It’s another sad artifact of the pandemic that Goodwin’s final seasons couldn’t be done as he intended.

Tuesday and Wednesday evenings of Festival week showcase the skills and reach of the ensemble’s professional singers, prepared by Andrew Megill, Associate Conductor and Choral and Choir Director. Vocal soloists Clara Rottsolk and Thomas Cooley star in the title roles of the seductive baroque opera by Purcell, Dido and Aeneas. The choir members, who come from all over the country with a London-based member, sing the choir parts and provide solos for the supporting characters.

Purcell, the prolific 17th-century English composer, has written just one opera, a beloved three-act masterpiece that covers more narrative ground in an hour than most operas manage. in addition to three. Lucky for us, an hour is exactly what we have. And how perfect for Goodwin to present this English gem as his last opera offering to the patrons of Carmel Bach.

The English libretto is based on Book IV of Virgil’s Aeneid and tells the story of Dido, the widow of the Queen of Carthage, who falls in love with the Trojan hero Aeneas. A wicked witch plots to separate them, forcing her lover to abandon Dido, who collapses in grief.

Goodwin conducted a vibrant and moving account of this musical treasure, using a lean concert setting, with the principals delivering their solos on a small riser at the bottom of the stage. The riser and the small string orchestra with harpsichord formed a semicircle behind which the chorale was seated at discreetly safe distances.

Rottsolk’s Dido turned out to be melodically beautiful and heartbreaking. Her singing of Dido’s famous mourning tune, â€œWhen I Am Lying on Earth,â€ was mind-blowing in its emotional depth and beauty. Cooley provided a heroic vocal counterpoint as Aeneas. Belinda, Dido’s sister and maid, sung by Linda Lee Jones, kindly completed Dido from Rottsolk. Alyson Harvey and Angelique Zuluaga made enchantingly sounding magical interferences, full of fiery fun in their roles as witches. The chorale delivered impeccable choruses and additional solos. The Hanson solo violin and strings complemented the musical excellence, and Goodwin seemed happy in his element as he skillfully led the ensemble.

Technical Director Doug Mueller and his team delivered a special effects storm for opera’s evil sorcery that showed off the power of the Sunset Center’s lighting and sound systems. Check out the Festival’s Facebook page for Mueller’s fascinating time-lapse video of the installation, performance and stage reset by Festival tech professionals.

Megill and the art of courtly love

COVID-19 has created a challenge for the Bach Festival beyond the thorny process of figuring out how to create an off-season concert series during a pandemic. It also hampered the process of finding conductors to find Goodwin’s successor as artistic director. Typically, during these transitions, applicants have the opportunity to meet with ensemble members and work with them to find the best match. While the search for the driver is ongoing, the board and administrative staff have yet to make their progress public.

Perhaps one way to facilitate this change would be to take advantage of the enormous skills of Festival Associate Conductor Andrew Megill to direct the next season. Megill is not only a distinguished conductor in his own right, but he has been a part of the Festival since 2007 and is highly regarded by the vocal and instrumental members of the ensemble. It is not known if he would be ready to take on a temporary artistic direction. But having it serve as a bridge for the next permanent music director for a season would provide some ease and leeway in the delayed research process and give the nominee a chance to observe the ways and traditions of the Carmel Bach Festival before diving in. like its new boss.

Megill’s artistic genius was fully on display with the chorale on Wednesday evening in its program “The Art of Courtly Love” which musically traces the lineage and influence in Western culture of the 12th century troubadours and the tradition of the French song.

Regulars will enjoy a nod to the Festival’s traditional Wednesday Mission Carmel concert as choir members procession down the aisles to the Sunset Stage. As Megill writes: â€œCourtly love was elusive and almost always secret. Its rules were highly artificial and elegant. Intriguing lines from a 12th-century French codification of these rules were read by the singers before each piece on the program, each suggesting a theme of the music to follow.

The program spanned the centuries, from haunting songs of medieval troubadours to songs of the Renaissance and the 19th and 20th centuries, culminating in a phenomenal setting in La Vie en Rose by Edith Piaf. The musical line of this progression, which includes songs by Debussy, Ravel, Paul Hindemith and Dutch composer Henk Badings, clearly shows to ears the ageless power and beauty of this tradition. In my opinion, if this Bright Hour were recorded, put on record, and made available to the public, it could win a national award, say a classic Grammy for Best Choral Performance. However, this concert is a fleeting art, like the other six, just a rehearsal, tickets available.

Thursday night’s Spanish crossover program, created by acclaimed Festival violinist Edwin Huizinga and fellow guitarist William Coulter, made a dazzling impression. Among its highlights, the concert brought dance back to the Bach Festival for the first time since the days of Maestro Sandor Salgo (1956-1991).

“The Spirit of Spain” featured six string players and harpsichordist Dongsok Shin, performing alongside Huizinga and Coulter, who perform internationally as a duo Fire and Grace. Fanny Ara, a small but powerful Basque dance goddess, hypnotized by her fiery and supple grace, her flamenco intensity and the ineffable magic of her presence.

The music emerged as a gift from the hearts of musicians, which included the vocal beauty of soprano Chelsea Helm and a suite of Bach dances interwoven with Spanish musical gems. Huizinga briefly explained how it meant being able to perform live again for Festival audiences.

On Friday, Goodwin bids farewell to the Festival in his program of Orchestral Treasures, an hour of short works by Rossini, Wagner and Beethoven. Last week, he explained that the choices for this concert were dictated by COVID-19 protocols, which limit the size of the ensemble on stage. He also reminded audiences that he had planned major works by Mahler, Verdi and Rossini and others for his last two seasons.

The concert ended the Festival week in style last Friday, with the lively Overture by Rossini to Il Signor Bruschino; the Siegfried Idyll, Wagner’s lovely and tender birthday present to his wife; and Beethoven’s First Symphony with its ancient classical style reminiscent of the symphonies of Haydn and Mozart. Goodwin led the orchestra in a crisp and crisp account of these works, another brilliant hour in this unique 2021 season.

The coronavirus has deprived artists and audiences of the experience of live performance for so long that the return to a great concert hall like the Sunset Center for world-class music in person seems miraculous. For me, going to the Sunset Center every night of the past week for that night’s special hour was like a long-awaited healing tonic.

The Bach Festival is at another crossroads with the departure of Goodwin. A new era begins next season. But for the next four days, the music continues with the programs discussed here and the chamber music series. For tickets and more information, call 831-624-1521 or check the website at www.bachfestival.org.

Who are the biggest pumpkin producers in Europe?