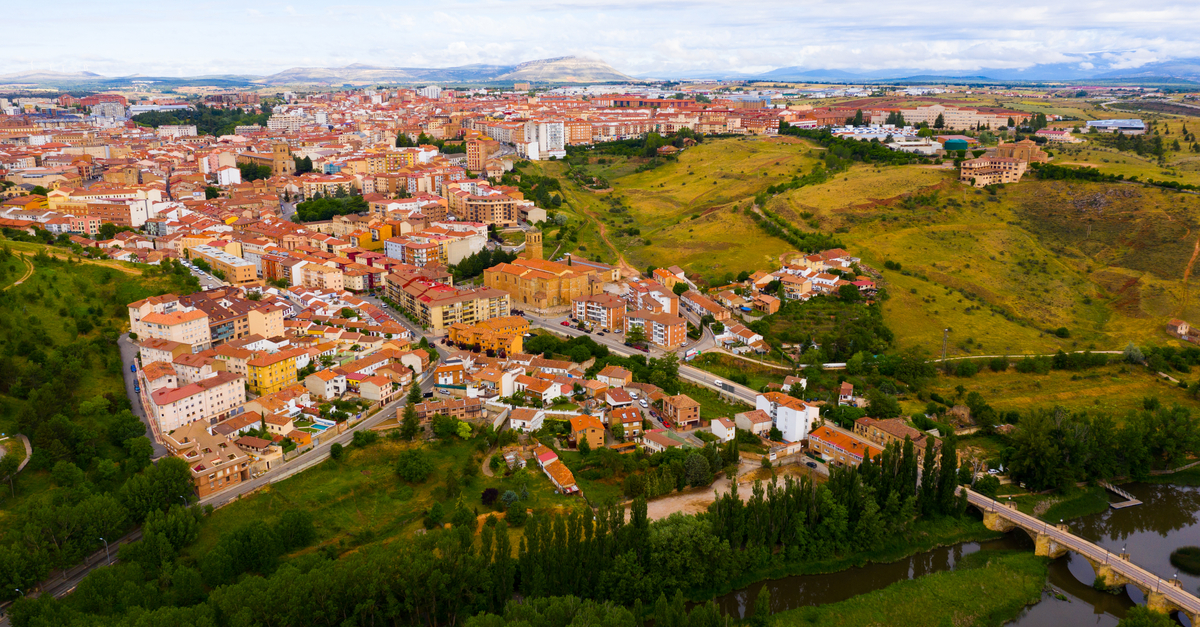 I had the good sense to marry a Spaniard. This is something I highly recommend, especially if you like good food and wine, loud fireworks and traveling like a local across the Mediterranean. Not only do I have a comfortable place to stay whenever I visit Spain, but I also get to visit places that get little ink in a typical Spain guidebook. One of them is Soria, about an hour’s drive northwest of Madrid.

Soria is both a province and a city, located in the eastern part of the autonomous community of Castile and León. Following colonization by Celtiberian tribes, the land was conquered first by Rome and later by Christian and Muslim kingdoms. In medieval times, the region was an important center of wool manufacturing. As industrialization took hold in Europe, Soria became increasingly rural. Military enlistment and emigration out of the country again depopulated the region under dictator Francisco Franco.

Unlike the largely flat, dry plains of central Spain, Soria is an interesting mix of landscapes – from vermilion cliffs and sunflower-lined valleys to quaint hillside villages and verdant vineyards clustered along the river Douro. The assortment of sights and activities make Soria a great place to explore the outdoors, then head into town for a glass of Tempranillo and tasty tapas and pinchos.

While Soria is popular with Madrileños looking to get away from the city, it is little known to travelers abroad. This makes it both easy to love and simple to navigate. Here is a sampling of the best things to see and do in Soria.

To begin your journey, head down the postcard-like medieval streets of the town of Soria. The most famous building is the Santo Domingo Church, which dates from the 12and century. Its facade is considered one of the finest examples of Romanesque architecture.

The Plaza Mayor of Soria is quintessentially Castilian and is surrounded by a variety of photo-worthy buildings, including the modern town hall and the House of the Twelve Lineages, the original governing body of the town. Less than a kilometer away, the Numantino Museum documents the city’s history, with artifacts from the Paleolithic era through the Middle Ages.

Be sure to stop for lunch or dinner – or both – in Soria. Castilian cuisine, which relies heavily on meat, tends towards simplicity and pastoralism. Traditional dishes include torreznos (marinated and fried pork belly), lamb stew, and migas of pastor (sautéed breadcrumbs with chorizo ​​and eggs). Although vegetarian restaurants are not common in this region, you can still find meatless salads and side dishes in most restaurants.

A short walk away, on the outskirts of the town proper, you will find this beautiful monastery. Dating from 13and century, it is best known for its series of finely carved arches. Some are from slightly different periods; all bear witness to the Muslim influence on Romanesque architecture. You can stroll through the old halls and courtyards of the building or visit the chapel, with its stone floors and vaulted ceilings.

The Sevillian poet Antonio Machado came to Soria in 1907 to teach French in a high school. He created some of his finest works there and met the great love of his life, Leonor Izquierdo… 24 years his junior. It is both a debatable and tragic story, as Leonor contracted tuberculosis and died in 1912, aged just 18. Machado left Soria, never to return.

Today, you can follow in the footsteps of the poet via a walking tour who visits places he loved and that inspired his work. From the school where he taught to his favorite social club, the couple’s house, and the trails along the Duero where he took dreamy walks, you’ll see why Soria became Machado’s muse. Next to El Espino Church, pay homage to Leonor’s Tomb and see the tree that was the subject of Machado’s famous “To a Dry Elm Tree.”

This was one of my favorite parts of our trip to Soria, a multi-generational activity that included my husband and I, his parents, his two brothers, and his youngest brother’s girlfriend.

Urbión is a famous place for mushroom hunting. So much so that Eastern European eagle-eyed mushroom fans, who seem to possess the uncanny ability to spot a mushroom from a dozen yards away, would make special trips to Soria and tear up the forest – at least , according to locals. Since then, the government has instituted a licensing program. You must apply in advance with your passport and pay a fee of around 25 euros per person to harvest. Some companies take the guesswork out of getting permits for you.

Although several varieties of mushrooms grow here, we spent our time combing the forest floor for porcini mushrooms. Within hours, the seven of us had filled two large baskets with about 4 pounds of the prized mushroom.

Mushrooms being the theme of our trip, we stopped for a leisurely lunch at The Lobita in the neighbor Navaleno. This minimalist-chic, Michelin-starred restaurant is not what one would expect in a small rural town. It is run by Elena Lucas, a third-generation female chef. His grandmother, Luciana Lobo – the eponymous “Lobita” or “little wolf” – was the OG. Lucas, a classically trained chef, now offers dishes inspired by his grandmother’s Castilian recipes, but with a lighter hand and more artful presentation.

In honor of my mother-in-law’s birthday, we had an 11-course mushroom-focused tasting menu. Everyone delighted the taste buds, from the mushroom pâté garnished with slices of tangy apples to the autumn stew with morels, passing by the croquette stuffed with truffled quail egg. Although the dessert – the three courses, topped with handmade dark chocolate cubes flavored with violets – did not contain mushrooms, it was equally unforgettable.

This lake, which opens like a gaping mouth in the mountains of Urbión, seems hushed and mysterious. At an elevation of 6,500 feet above sea level, it was formed during the ice age and is surrounded by granite cliffs and Scots pines. The lagoon is the subject of many legends. Some say it is endless and connected to the sea by a system of underground caves. Others warn that it is haunted or that a hungry creature that lives at the bottom makes a meal of anything that falls.

Although the black lagoon of Urbión is the site of a famous swim on the first Sunday in August, which I visited in the fall, when the air was cooler, the days shorter and the crowds non-existent. Standing on it, I could see why Machado immortalized it in his poem “La Tierra de Alvargonzález”.

Pro Tip: The road to the Black Lagoon is narrow and steep, and not for those who get easily irritated behind the wheel. It is also closed, often without warning, in the event of inclement weather. Don’t try to travel on a very rainy or icy day and sign up for a tour if you’d rather not drive yourself. If driving, park in the Paso de la Serrá parking lot and walk to the park, just under a mile.

Another favorite part of our trip was visiting Rio Lobos, a 15-mile gorge that slices through a limestone plateau. The canyon is located inside a 24,000 acre park, a designated special conservation area for birds. You can access the park — for free — from several points. The best way to enter is by far the lower part, via the SO-920 between San Leonardo de Yagüe and El Burgo de Osma.

The canyon, whose walls rise like sentinels around a sleeping natural kingdom, is one of the most beautiful landscapes I have visited in Spain. At the far end is the Chapel of St. Bartholomew, built in the 1200s in a transitional style between Romanesque and Gothic. It’s a quick visit and close to several walking trails that take you all around the park.

The trails are easy, although a few contain water crossings where we had to choose our path carefully. It is worth discovering the wide variety of landscapes, including grassy hills, crystal clear streams, sloping forests, cliffs and caves that provide refuge for bats, robins and griffon vultures.

At one end of the Ucero River you will find this former military stronghold. Small, friendly and lively, its unique charisma comes from a collision of Roman, Arabic, Gothic and modern influences.

In addition to a compact downtown shopping and dining district, the city offers a variety of sights. There is a perfectly preserved Roman bridge, a stunning cathedral dating from around 1230, Arab watchtowers and an arcaded Plaza Mayor. Around the town, you can walk the medieval ramparts and admire well-preserved murals of knights and soldiers.

El Burgo de Osma was an afternoon stop on the way back to Madrid, so I didn’t get the flavor of the city at night, nor its more luxurious side. On my next visit I plan to stay at Castile Termala hotel and thermal spa housed in a 16th century university.

For more ideas and inspiration for traveling to Spain, explore these articles: