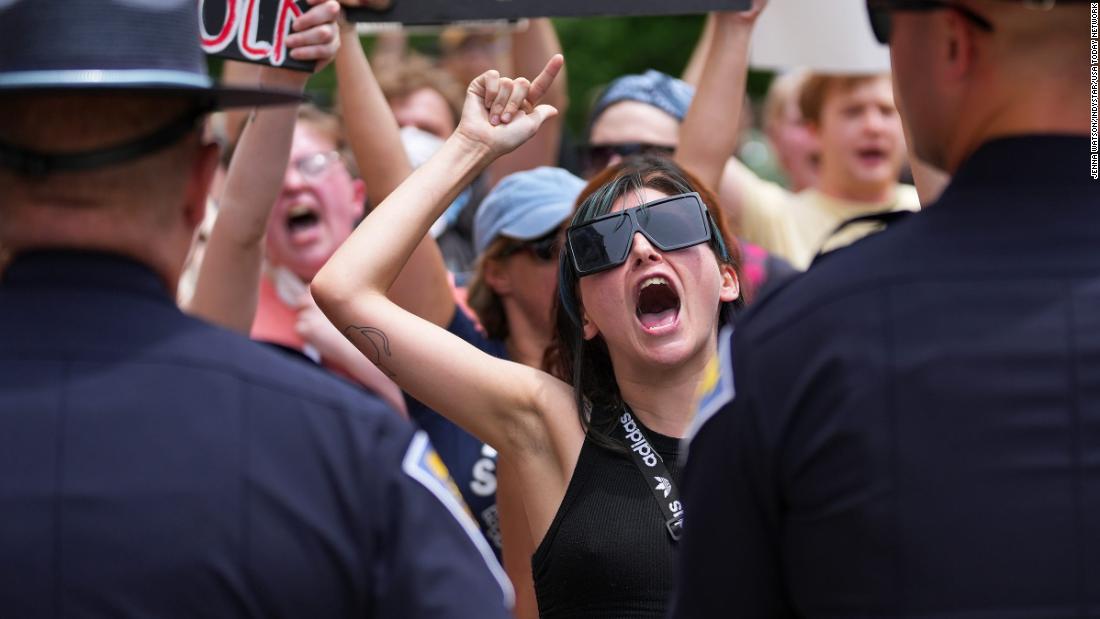 A man approaches the body of his son, who was reportedly killed by a cluster rocket in the city of Lysychansk, Ukraine, on Saturday June 18.

Beachgoers take advantage of the warm weather in Bournemouth, England, on Friday June 17.

People gather for sunrise for the summer solstice at Stonehenge in Wiltshire, England on Tuesday June 21. It is the longest day of the year in the Northern Hemisphere.

An ostrich looks at her eggs at Jaipur Zoo in Rajasthan, India, Wednesday, June 22.

Indigenous protesters walk past red-hot roadblocks in Machachi, Ecuador, Monday, June 20, as they head towards the capital, Quito, after a week of protests against President Guillermo Lasso’s economic and social policies.

A member of staff holds the painting ‘Cloud Study’ by John Constable in front of a painting titled ‘Study for Clouds’ by Gerhard Richter at Sotheby’s in London on Wednesday June 22.

Baltimore Orioles shortstop Jorge Mateo is hit in the neck by a pitch during a Major League Baseball game against the Tampa Bay Rays in Baltimore, Maryland on Sunday, June 19.

Residents follow an ambulance containing the corpse of a Congolese soldier in Goma, Democratic Republic of Congo, Friday, June 17.

A bird flies over Britain’s Ryan Peniston as he competes in a tennis match against Spain’s Pedro Martinez in Eastbourne, England on Wednesday June 22.

Firefighters battle a wildfire in Pumarejo de Tera, Spain, Saturday, June 18. It is just one of several fires in Spain after an extreme heat wave hit the country.

Workers stand next to a giant hole in a road caused by the collapse of a drainage system due to heavy rains in Villa Nueva, Guatemala, Monday, June 20.

Britain’s Catherine, Duchess of Cambridge watches from the royal box on the fourth day of the Royal Ascot horse racing meeting in Ascot, England, June 17.

National Rally leader and French far-right MP Marine Le Pen walks away after being escorted by French President Emmanuel Macron after talks at the Elysee presidential palace on Tuesday, June 21.